Are our Church doors opened or closed?

Are we a house of mercy or a house of judgment?
Are we welcoming and accepting to all our struggling sisters and brothers? Or do we drive people away with our unkind words or gestures?
Pope Francis is officially calling for a jubilee, a Holy Year of Mercy. It begins later this year.
Mercy is shocking. Mercy is beautiful.  Mercy can take your breath away.
Perhaps you saw the story this week about the CNN news anchor who wrote an article about how her faith has been reawakened by Pope Francis.
Carol Costello started by sharing her story about how the doors closed on her faith. 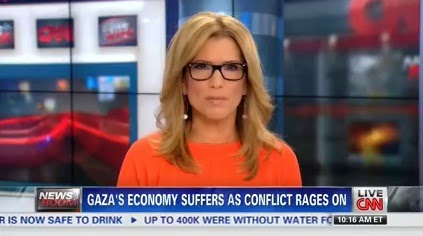 “I remember the day I stopped praying. It was the day after my little brother, Jimmy, died of cancer. He was 25. I was so angry at God.
I was 27 at the time, and, like most young people I had stopped going to church. But, on that day -- that terrible day -- I desperately needed to understand why God took my brother. I called the nearest Catholic church, looking for a priest. A lady picked up the phone. ‘Can I talk with Father?’ I asked.
I wish I could say her answer was ‘yes.’
Instead, she asked me if I was a member of that particular parish. ‘Does it matter?’ I asked (At the time I lived far from my home parish). I don't remember how she responded, but the answer about my being able to see Father was clearly no.
I cried for a bit, then decided I would never ask God for anything. Clearly, his conduits on Earth did not have time for me -- a lifelong Catholic -- and sinner -- so why would he?”
But it was a conversation with a Catholic Cardinal about people who may feel outside the doors of the church that changed everything for Costello. 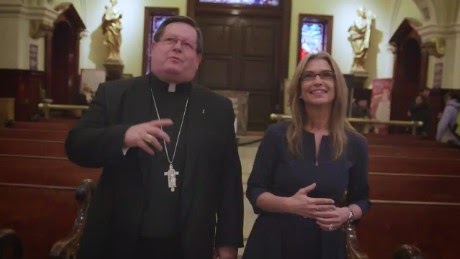 “’There is room for everyone. The door is open,’ Canadian Cardinal Gerald Lacroix insisted. (The Cardinal says there are hard truths in the Gospel and in Church teaching) But that doesn't mean we reject.’”
Costello said, “That last sentiment – ‘that doesn't mean we reject.’ -- did it for me.
I finally understood why Pope Francis reawakened my faith. I always felt my church would reject me for committing the smallest of sins. Like calling a priest at a church that was not my home parish. Like not covering my head with a traditional veil at Easter. Like accidentally eating meat on Holy Friday…

(Cardinal) Lacroix likened … Pope (Francis)'s approach to Jesus. ‘Jesus didn't judge. Jesus did not come as a judge. He came as someone who preached and talked about the love of God… Jesus walked with sinners until the very end. He did not banish them to fires of hell, for He refused to give up on anyone.’
I can't wait to go church next Sunday. And, yes, I will bow my head and pray for forgiveness, and if I'm worthy, Christ's love.”
The words of CNN anchor Carol Costello.
Pope Francis officially detailed this week the upcoming jubilee,  a Holy Year of Mercy. 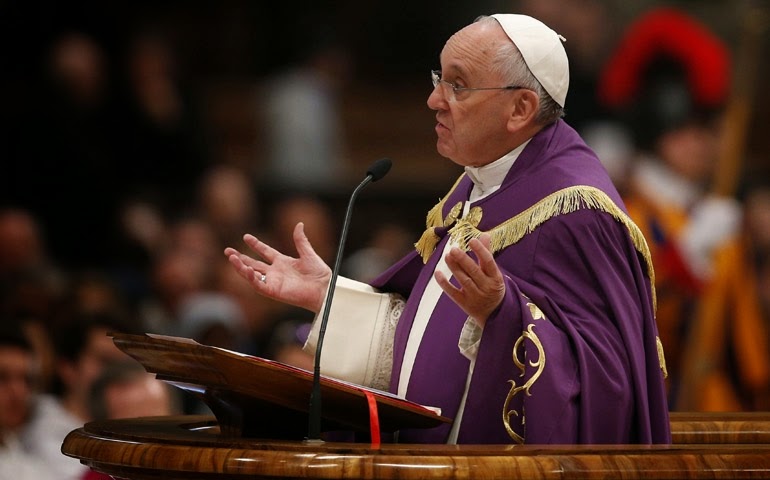 “The time has come for the Church to take up the joyful call to mercy once more… It’s a time to return to the basics and bear the weaknesses and struggles of our brothers and sisters… Mercy is the force that reawakens us to new life and instills in us the courage to look to the future with hope."
That’s exactly what Peter is talking about in today’s first reading from the Acts of the Apostles. He’s just healed a crippled beggar in the streets of Jerusalem. 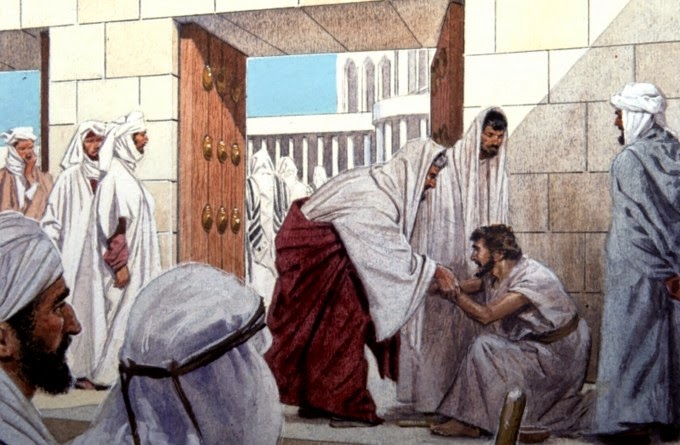 The beggar asked only for alms, and Peter said,
“’ I have neither silver nor gold, but what I do have I give you: in the name of Jesus Christ the Nazorean, [rise and] walk.’ Then Peter took him by the right hand and raised him up, and immediately his feet and ankles grew strong. He leaped up, stood and walked around... walking and jumping and praising God.”
The beggar was expecting alms. What he got was “the mercy of God in the form of liberation from his lameness.”
Peter had just performed his first miracle and all were amazed. But Peter used the moment to tell the people of Jerusalem of the Glory of God through his own Son’s resurrection, reminding them of their culpability in the brutal death of Jesus Christ.
This all happened outside the doors of the Temple.
Then he called on them to “repent… and be converted, that your sins may be wiped away.”
I love that line, “that your sins may be wiped away.”
These words echo in something you may not know about.
When a deacon or a priest reads the Gospel at Mass, he ends the reading by saying the following silent prayer: "Through the words of the Gospel may our sins be wiped away." This prayer is for all of us. Yes, even those we may shoo away from the closed doors of our Church.
Speaking of closed doors, Jesus appears through closed doors in today’s Gospel reading.
For context, the courage shown in the first reading in Acts is now replaced by the cowardice of the Apostles hiding behind closed doors.
They’re listening to the amazing story of what happened on the Road to Emmaus, when Jesus appeared. The apostles were “startled and terrified and thought they were seeing a ghost.”
But an even more amazing sight was Jesus in the resurrected flesh requesting something to eat. 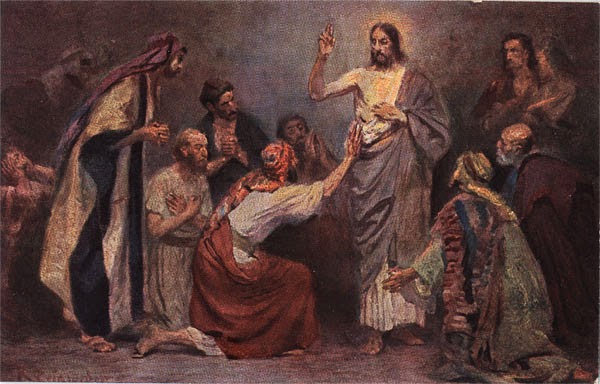 Then Jesus in his glorified body said to them, “Thus it is written that the Christ would suffer and rise from the dead on the third day and that repentance, for the forgiveness of sins, would be preached in his name to all the nations, beginning with Jerusalem. You are witnesses of these things.”
So how are we witnesses of these things?  Are we preaching repentance for the forgiveness of sins?  Or are we focusing solely on justice, the law and condemning people for their sinfulness?
Pope Francis is asking us to be a people of mercy. Jesus is asking us to be a people of mercy.
So, how do we do that?  How does our Church become an open “Door of Mercy” called for by Pope Francis?
In a few weeks, this placard will appear in the pews of our two churches.  It’s entitled, “All Are Welcome – How to be a Church of Open Doors.” 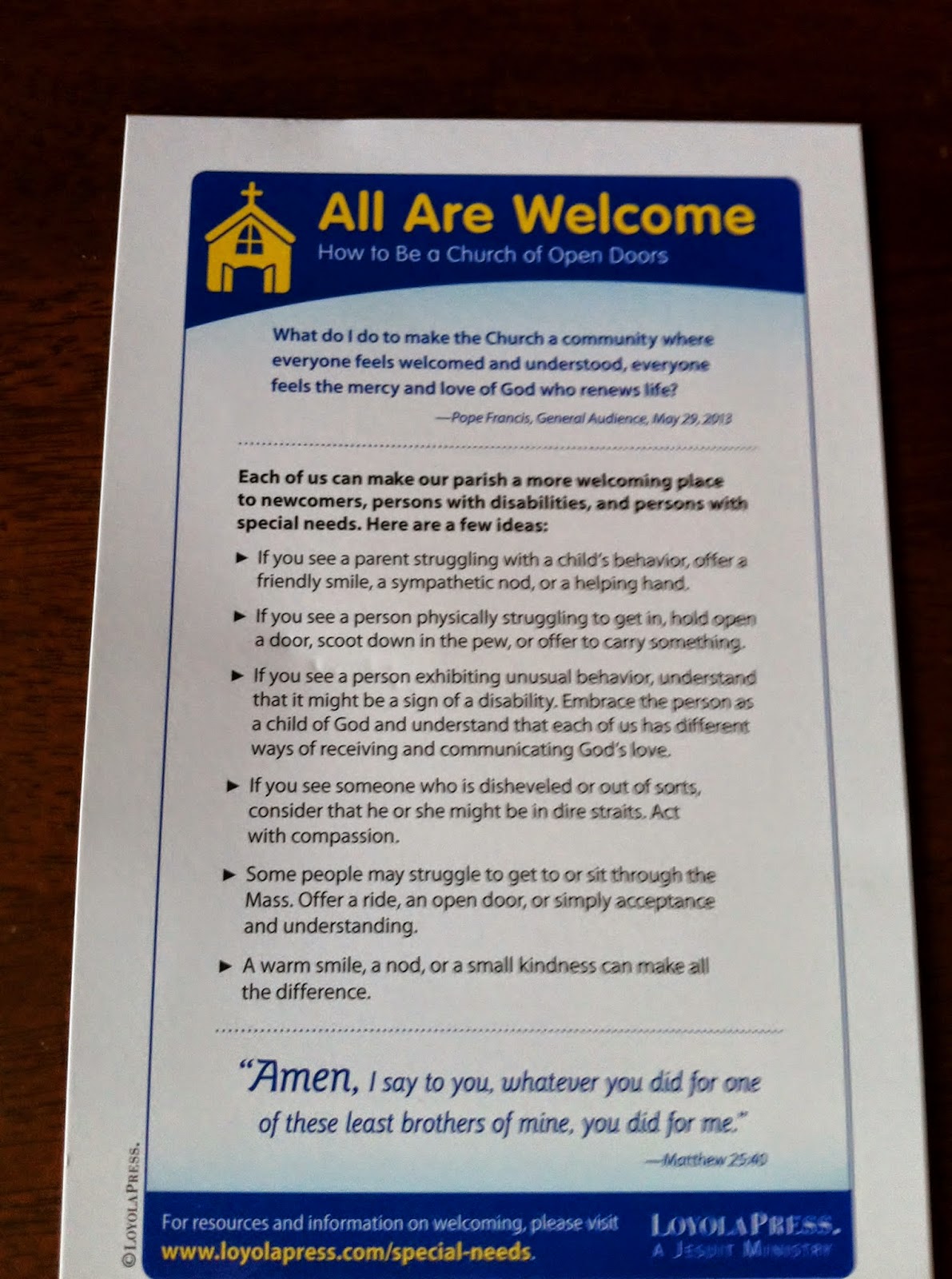 It reads:  “Each of us can make our parish a more welcoming place to newcomers, persons with disabilities, and persons with special needs.”
It even offers a few ideas:
“If you see a parent struggling with a child’s behavior, offer a friendly smile, a sympathetic nod, or a helping hand.”
Here’s another idea from the placard:
“If you see a person exhibiting unusual behavior, understand it might be a sign of a disability. Embrace the person as a child of God and understand that each of us has different ways of receiving and communicating love.”
And there’s this one that should come in handy when we are uncomfortable with someone’s behavior during Mass:
“If you see someone who is disheveled or out of sorts, consider that he or she might be in dire straits. Act with compassion.”
And always remember this final idea:
“A warm smile, a nod, or a small kindness can make all the difference.” 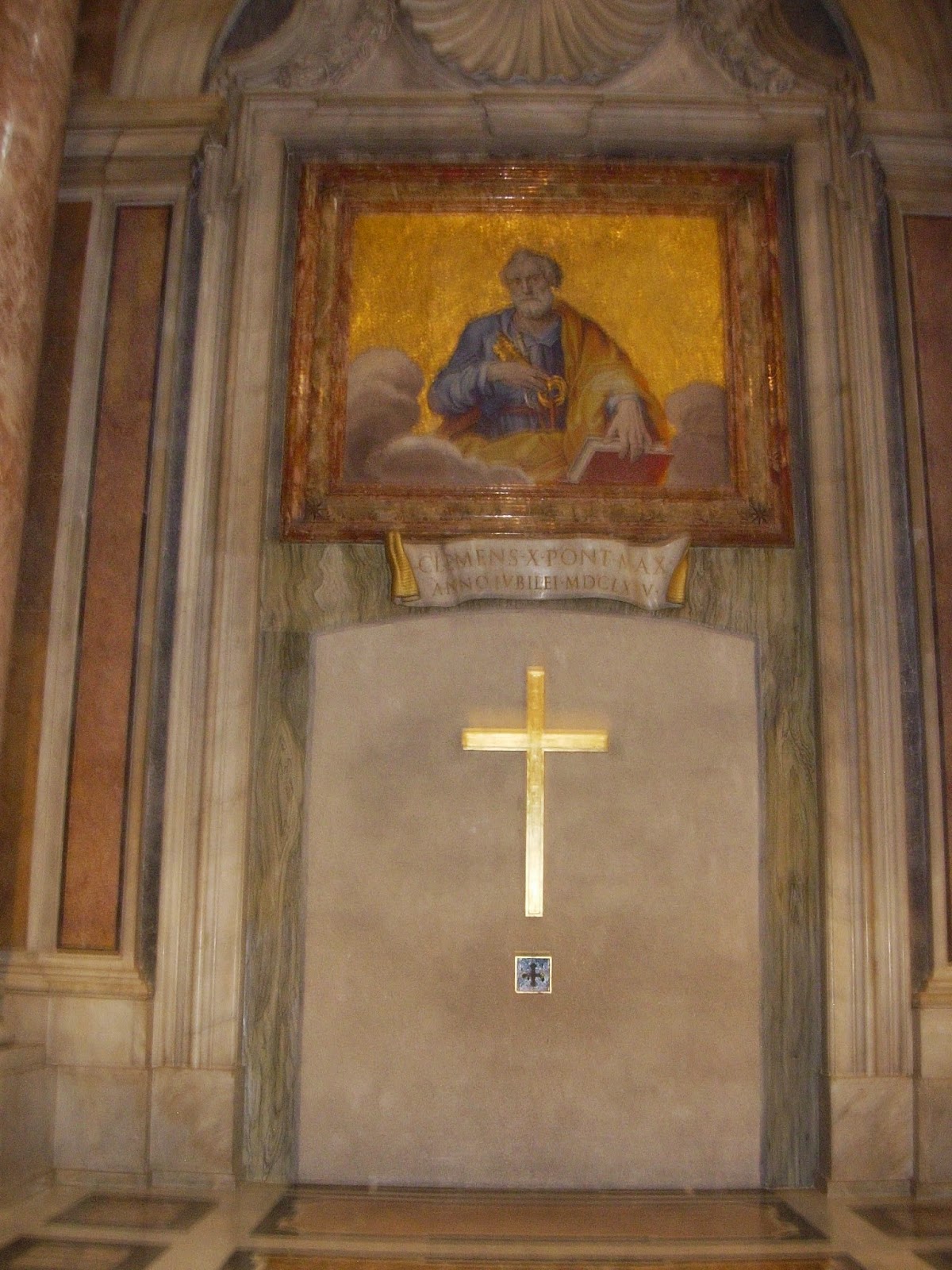 This is the behavior our Holy Father is calling us to show as we open our Doors of Mercy and become a more welcoming, non-judging, non-condemning Church.
Pope Francis says the Church’s “very credibility is seen in how she shows merciful and compassionate love.”
“The Lord asks us above all not to judge and not to condemn,” adds Pope Francis, saying “If anyone wishes to avoid God’s judgment, he should not make himself the judge of his brother or sister.”
The Holy Year of Mercy begins on the feast of the Immaculate Conception in December.
We have eight months to get our house in order as we prepare to open our Doors of Mercy.
I pray we will be ready with open hearts, too. 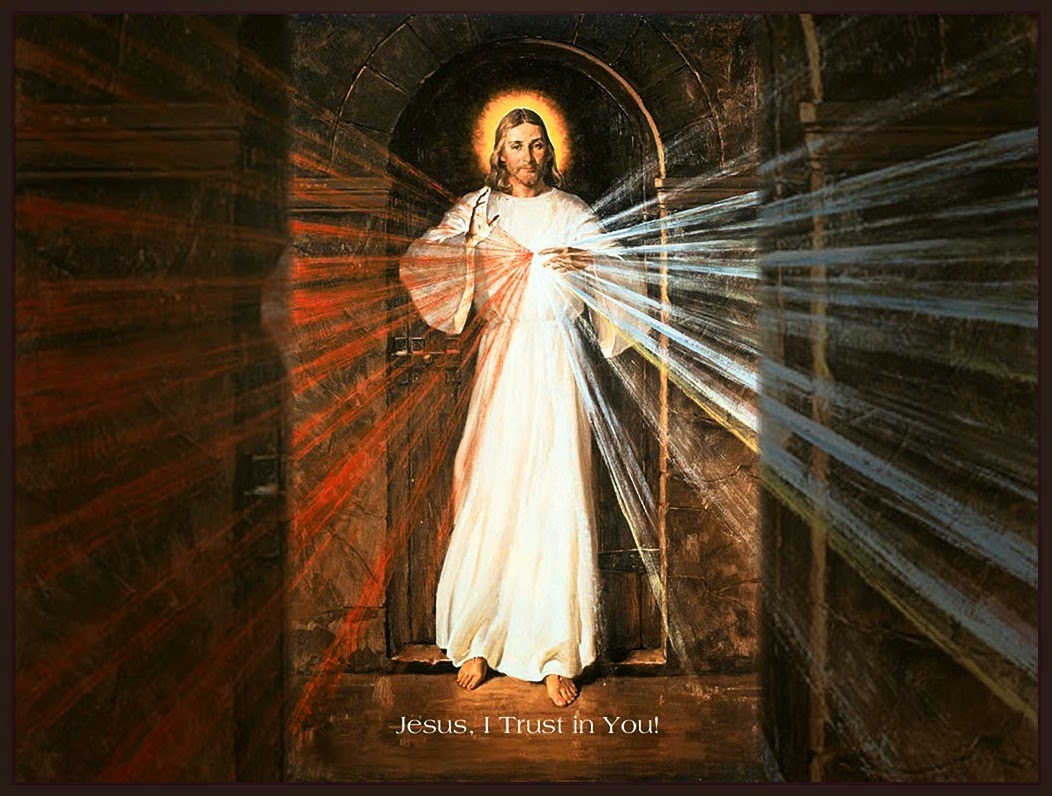 Posted by iServant Media at 7:41 AM No comments: