This is the last ordinary weekend of the liturgical year.

Next weekend we commemorate something extraordinary, the solemnity of “Our Lord Jesus Christ, King of the Universe,” the official end of our liturgical year.
In many ways, we’re already celebrating “Christ the King” with today’s readings.
This is no ordinary message. It’s an extraordinary one, a prophetic one.  It’s one preparing us for what is to come. 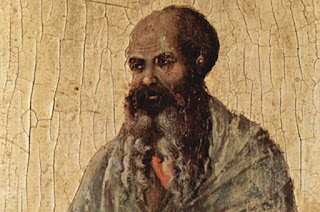 The first reading from the Prophet Malachi is meant to shake us from our complacency.  Movies and books depicting an apocalyptic end of the world have Malachi’s words to thank for that.
But when we read literature from the Jewish apocalyptic tradition, like Malachi and Luke’s Gospel message, we must be careful not to speculate about the fulfillment of Jesus’ words in our modern world.  This sort of thing has been going on for two thousand years. 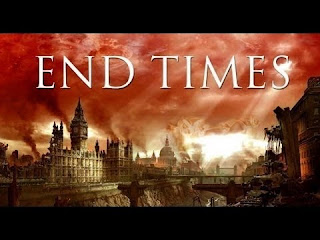 Some of our born-again Christian sisters and brothers do this every time they talk of the Rapture and End Times.
This is really not what Jesus is talking about here.
No. Jesus is reminding us His Kingdom is not of this earth.   Jesus is warning us of charlatans who will profit from the fears and uncertainty in our troubled world.  Jesus is cautioning us not to follow these con men, but follow Him and His life-giving ways.
But Jesus is also reminding us when we live the life of Christ we will face rejection and persecution. Yes, even in our own faith tradition, our own families, and our own circle of friends. 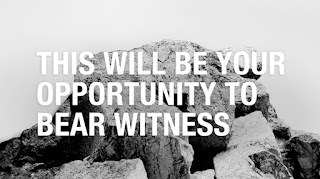 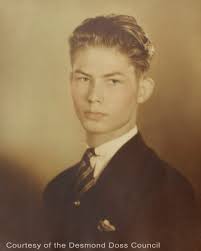 Problem was, as a devout Seventh Day Adventist, he refused to touch a gun. Instead, he wanted to serve his country as a medic.
From the day he reported for duty, his life was a living hell.
“While Doss viewed himself not as a conscientious objector, but a conscientious cooperator, his fellow infantrymen and superiors did not see it that way. When he arrived for basic training at Fort Jackson, S.C., he quickly became an outcast from the rest of the recruits. His slight stature and shyness did not improve the situation, and many soldiers believed he would be a major liability in battle.” 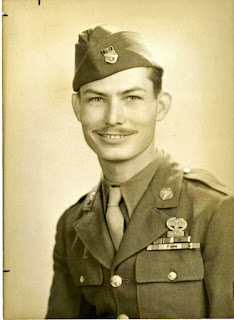 He was nicknamed “the coward” and faced regular beatings from his fellow enlisted men and verbal taunting from his commanding officers and drill sergeant.  The goal was to wash him out of boot camp.  And everyone was joining in.
“You will be hated by all because of my name, but not a hair on your head will be destroyed. By your perseverance you will secure your lives.”
As Christians, we are called not to live ordinary lives, but extraordinary lives of service and sacrifice to our King and Savior.
As Private Doss said during his lifetime, “I wanted to be like Christ in saving life instead of taking life.” That was the reason he wanted to join the Army Medical Corp. 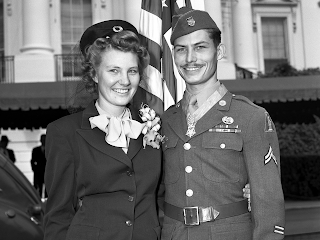 Private Doss endured a torturous bootcamp experience and eventually made it to the field of battle as a medic on Okinawa. It was the site of what was considered the second bloodiest conflict in World War Two.  The first being D-Day.
It was April 1945, and war with Japan was at a critical turning point.  Okinawa would be the final test to determine who would win the war. 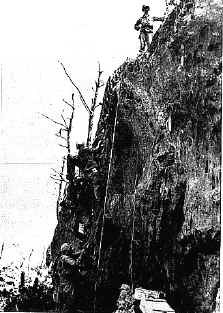 The object of Private Doss and his 307th Infantry, 77th Division was the hellish Maeda Escarpment, a battlefield located on top of a sheer 400-foot cliff. The site became known as Hacksaw Ridge.
A treacherous rope ladder was the only way up the sheer cliff.
The Americans stormed the ridge and took the escarpment for less than a day. The next morning the Japanese emerged from the catacomb tunnels and drove the U.S. soldiers off the escarpment and back down the rope ladder.
Hundreds of wounded were left behind.  Private Doss was faced with a brutal decision, abandon the ridge or risk lose his life saving his fellow servicemen. He chose the latter and reentered the field of battle searching for the lost and wounded. 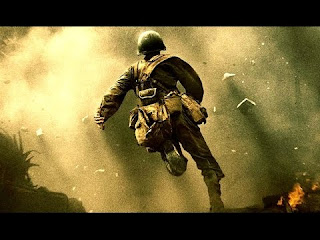 When he would find a soldier alive, he would take him back to edge of the cliff and hoist him down with using ropes.
Each time he would save a man’s life, he would pray out loud, “Lord, please help me get one more.  Help me get one more.”  This went on all day and all night.
In the end, Private Doss saved 75 men before saving himself.
The men who persecuted Private Doss were now in awe of him. Many had his heroics to thank for their very lives.
His commanding officer said he had misjudged Doss and wondered if the private could ever forgive him.  For years after the war, the captain would blink back tears in telling Doss’ story.
Eventually, the Americans tried to take the Ridge again.  As they waited to climb the wall on the Sabbath Day, a radio call broke the silence before the assault with a General asking, “Why haven’t you started climbing the ridge?”  The Captain’s answer was curt, “We’re waiting for Private Doss” who was finishing his prayers.
Hacksaw Ridge was eventually taken, and as we know, the Japanese were defeated a few months later.
Doss was injured during the battle for Hacksaw Ridge and returned home a corporal and became the first conscientious objector in American history to be awarded the Medal of Honor. 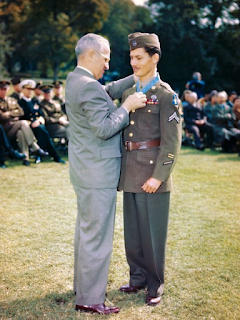 President Truman was so excited to meet Corporal Doss he walked right up to him to shake his hand instead of waiting for the soldier to come to him during the awarding ceremony.
Catholic director Mel Gibson has made a new movie on the story. It’s hard to watch due to the realistic scenes of war, but the movie received a rare, 10-minute standing ovation by a thousand movie goers at the Venice Film Festival two months ago.  This story of deep faith is receiving numerous accolades and Oscar buzz.


Desmond Doss said during his lifetime, “I know who I owe my life to, as well as (that of) my men. That’s why I like to tell this story for the Glory of God because I know from a human standpoint I should not be here.”  For the remainder of his life until his death in 2006, Desmond Doss kept telling and retelling his story and giving Glory to God always. 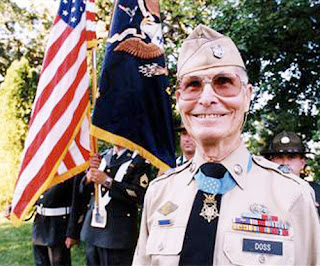 Corporal Doss walked into one of the bloodiest battles of World War II with nothing to protect himself but his Bible and his faith in God.  This ordinary man did extraordinary things, all in the name of Christ the King.
We are ALL called by God to live extraordinary lives of faith. 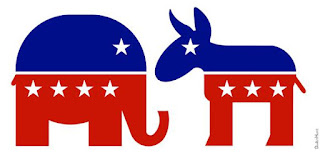 The events of the past week show we are a deeply divided nation. We Christians should not be gloating, nor blaming, nor persecuting others who do not think like we do, but loving other. We Christians must be shining lights in the darkness of this troubled world and present ourselves as a model to the world as St. Paul calls us to do in today’s reading to the Thessalonians.  We Christians must always put our trust and faith in Christ Jesus, not in men or women. 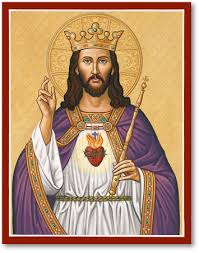 May we ALL resist the temptation to choose the easy road of living ordinary lives and live extraordinary lives for Jesus, our savior and our King.

Posted by iServant Media at 7:50 AM No comments: