HOMILY – Solemnity of Our Lord Jesus Christ, King of the Universe

Today we celebrate the Solemnity of Our Lord Jesus Christ, King of the Universe. Sounds a little like the title of a Marvel Superhero movie. And in some ways it is. 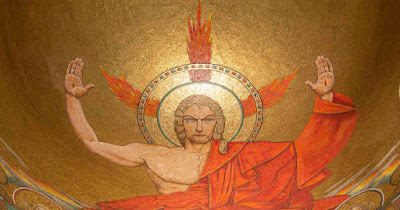 Jesus is talking about Divine Judgment in today’s scripture Parable of the Sheep and Goats. This is the final public teaching of Jesus in Matthew’s Gospel and has one of the most important lessons for all Christian believers.

Jesus is reminding us that judgment will be based on the acts of charity or what the Church calls Corporal Works of Mercy. 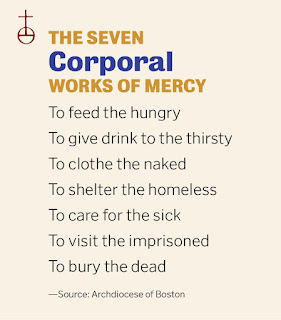 A few weeks back I heard about a person experiencing homelessness setting up shop outside St. Patrick. Mass was about to start and people didn’t know what to do about the poor soul living outside our Church door.

I said, not a problem, I’d be happy to talk to him. As I stepped outside to chat with the man, we instantly recognized each other. It was my friend Robert who we had worked with for the past few years with our MercyWatch outreach in Snohomish County.

When he saw me, he broke into tears and embraced me and we got caught up on what was going on in his life.

Yes, I know him, know his story, know his many struggles. He was a regular at Mass in Everett. Robert is a devout Catholic who attended Catholic schools. And now he lives on the streets of Seattle and is using our front porch to keep out of the rain. 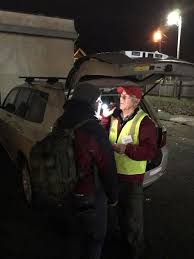 He’s been attending Sunday Mass each week since our encounter and our MercyWatch team has been making special trips to St. Pat’s weekly to give Robert food, water, socks, blankets and other needed survival items.

We walk by these poor unhoused souls every day. Homelessness is exploding in our fair city. What are we Christians supposed to do?

We are to show love to our neighbor. And by doing so we show love for God.

In doing so, we encounter the sacred through our works of mercy and charity. This is what distinguishes holy Christian service from secular acts of kindness. 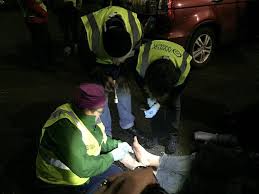 In this week’s parable, Jesus opens our eyes so we can recognize His presence in the “distressing disguise of the poor”, as St. Teresa of Calcutta described it, and know Him, love Him, and serve Him.

Such a new awareness should motivate us to readily demonstrate heroic generosity and compassion for others who are struggling on the margins. Especially in this time of pandemic.

Jesus also reveals something important about what the Church now calls the preferential option for the poor. These are “the least of these sisters and brothers” in the world in need of our care.

So, how can we provide this care as a paired parish community? 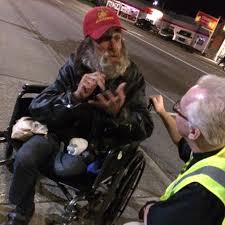 Beginning in the new year, we begin formation for a team of outreach workers to learn about how best to provide the ministry of presence and service to our unsheltered friends.

Once formed, this group will head out every Wednesday at Noon to provide needed emergency supplies to our street friends experiencing homelessness.

What do they most need? Besides food and water, the most requested items are socks, blankets… and rosaries. Yes, rosaries. Folks on the streets need faith, too, to sustain them in their plight and we have found rosaries in hot demand.

You can help simply by supporting our efforts: making sandwiches for our team, providing bottled water, socks, blankets, hats, gloves and handwarmers. All of these items will be needed for this effort. And everyone in the two parish communities can do their part to keep us in good supply. 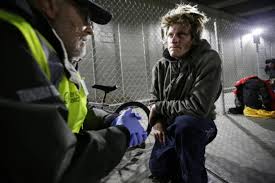 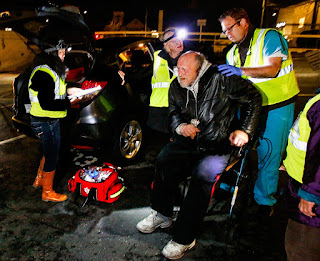 The Solemnity of Our Lord Jesus Christ, King of the Universe was established by Pope Pius the Eleventh in 1925 to remind people that one person alone has a claim on our lives: Jesus Christ. We follow his lead always.

In the 1920’s authoritarian dictatorships were becoming common in Europe. The Pope wanted to counter this emerging popularity among the Catholic faithful.

The Popes encyclical announcing the Solemnity said this:

“Nations will be reminded by the annual celebration of this feast that not only private individuals but also rulers and princes are bound to give public honor and obedience to Christ. It will call to their minds the thought of the last judgment, wherein Christ, Who has been cast out of public life, despised, neglected and ignored, will most severely avenge these insults…” 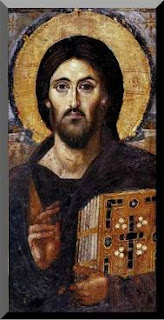 As we grow deeper in our faith, deeper in holiness, I invite you to become a part of the Sacred Encounters team as we together better put our faith into action and bring the love to Jesus to everyone.

Posted by iServant Media at 3:48 PM No comments:

If you knew today was your final day on earth, how would you spend the time you had left?

Would you do anything differently? 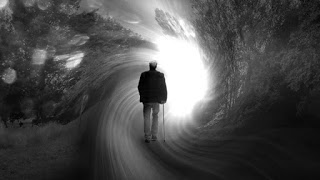 Would go to confession to unburden yourself of any baggage you might be carrying?

Are you ready today to meet Jesus face to face?

Saint Benedict’s Rule for Monks encourages they think about their death every day: “Keep death daily before your eyes. This is part of a wisdom tradition. If we realize that this might be our last day, we generally will try to make good decisions about how we are living.”

Father Mychal Judge lived his life this way. The Franciscan friar was as a Catholic priest for 40 years, serving his final nine years as chaplain to the New York City Fire Department. 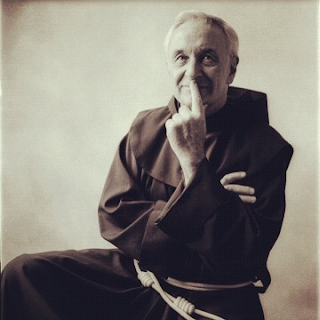 During his long ministry, Fr. Mychal battled alcoholism and found his sobriety thanks to AA.

He was very well known in New York City for ministering to the homeless, the hungry, recovering alcoholics, people with AIDS, the sick, injured and grieving, immigrants, and those who felt alienated by the Church and society.

A dear friend remembers giving him a jacket as winter was approaching.  Fr. Mychal didn’t have a jacket at the time.  But on the way home after receiving the gift, Fr. Mychal saw a homeless person lying in the cold and gave it to him. He sheepishly told his friend, “He needed it more than me.”

When anointing a man dying with AIDS -- a man who asked friends “Do you think God hates me?” -- Fr. Mychal just picked up the frail man, kissed him and silently rocked him in his arms.

Fr. Judge was considered by many to be a living saint for his extraordinary works of charity and his deep spirituality. 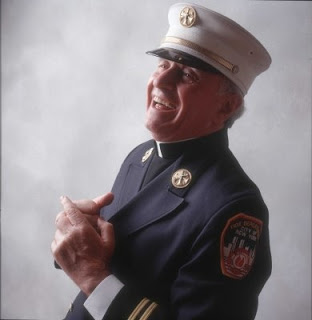 On the morning of September 11th, 2001, Fr. Mychal heard the news of the first plane hitting the World Trade Center. He quickly changed out of his Franciscan brown habit, put on his Fire Department chaplain’s uniform, and rushed to the scene.

He was met by Mayor Rudy Giuliani who asked him to pray for the city and the victims.

Fr. Mychal was spotted by many in the early moments of the tragedy consoling the injured and traumatized, and praying his rosary.

When the South Tower collapsed at 10:59am local time, Fr. Mychal was among those killed by the debris that went flying through the North Tower lobby. 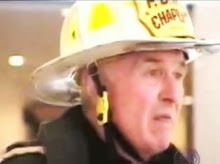 Shortly after his death, an N.Y.P.D. lieutenant found the priest’s body. He and two firemen, an emergency med tech and one civilian bystander carried Judge’s body out of the North Tower, a moment captured in a breathtaking photograph by a Reuters photographer. 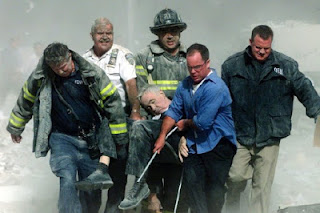 The Philadelphia Weekly called the photograph “an American Pieta.”  Judge’s body was laid before the altar of St. Peter’s Catholic Church.

Fr. Mychal Judge was designated the first official victim of 9/11. 3000 people attended his funeral. His fire helmet was presented to Pope John Paul The Second. 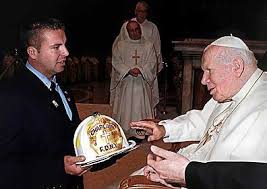 Fr. Mychal Judge’s spiritual lamp was found burning brightly as he met Jesus in the rubble of the World Trade Center.

We Christians are called to live in such a way as to always be ready for Jesus’ arrival.

This weekend’s readings speak of this readiness by highlighting the importance of wisdom.  The wise prepare. The foolish do not. And when the door to the wedding banquet is locked, the foolish won’t be allowed to enter.

We are called to always be ready to meet Jesus and live our lives like we could our Savior at any moment. 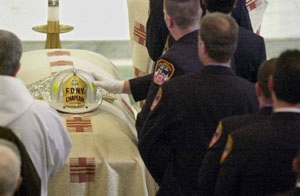 As we come to the close of the liturgical year, our Church turns to Matthew 25. Matthew is using themes drawn from Jewish Apocalyptic literature.

These readings are designed to get us thinking about end times.  For our evangelical sisters and brothers, this is a conversation about Rapture and the end of the world. That's not what the Catholic Church teaches. For Catholics, this conversation is more personal. It’s all about becoming our best selves before meeting Jesus face-to-face. 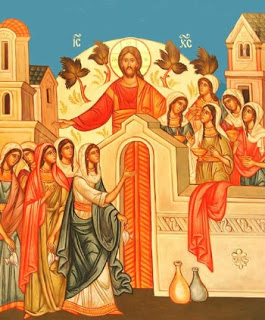 When the Lord comes, all that will matter is the kind of person we are, not what we have achieved or what we have amassed in this life.  But who we are and what we’ve done to build up the Kingdom by serving others -- especially the poor and marginalized.

What if we should be caught unprepared, with little or no oil in our spiritual lamps?

We are called to keep our lamps burning brightly. There are 5 easy ways to do this:

Pray daily and grow in your relationship with Jesus. This is the most important relationship and we should want Christ to be our best and closest companion on this road we call life.

By serving the marginalized and outcast, you will be building up the Kingdom and preparing for the Lord’s return by being Jesus to others.

Use the Sacrament of Reconciliation. This is a powerful way to unburden oneself from any sinful baggage we might be carrying.

We are a “chosen race, a royal priesthood, a Holy nation.”  We have been called out of darkness into his wonderful light.  So, rejoice.

True wisdom means living a life centered on the divine, on following God’s will in our lives, on loving God by loving our neighbor as ourselves.

Fr. Mychal Judge wrote a special prayer. I think it’s fitting as we reflect on how best to live our lives as if it were our last day: 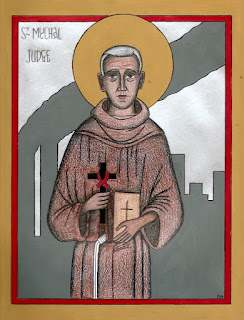 Posted by iServant Media at 2:59 PM No comments: