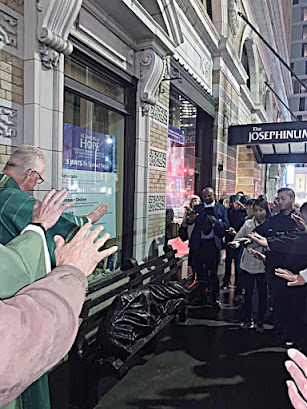 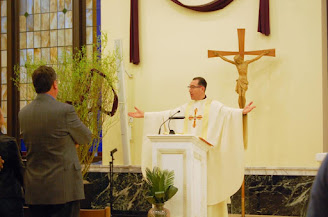 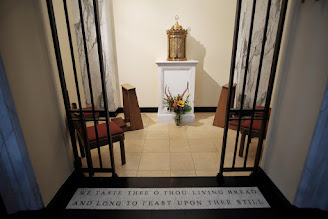 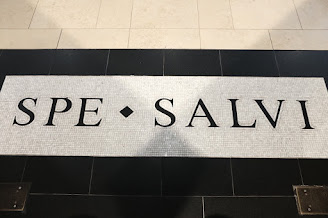 Posted by iServant Media at 8:35 AM No comments:

“The one constant through all the years … has been baseball. America has rolled by like an army of steamrollers. It has been erased like a blackboard, rebuilt and erased again. But baseball has marked the time.” 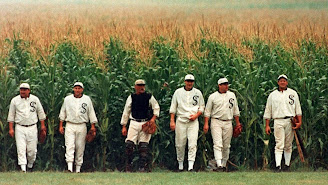 This is a famous quote from a favorite movie, “Field of Dreams.”

Baseball is America’s sport. It’s called our national pastime. Even without fans in the stands this season.

Baseball has a special place in the hearts of many Americans. 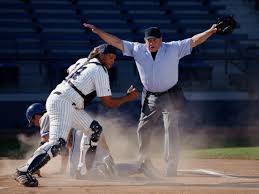 Love ‘em or hate ‘em, the umpire’s job is to keep the game from devolving into chaos.

And so it goes with he Catholic Church. God is perfect. Humans strive for perfection.

This week, Jesus is doing something that will reverberate throughout Christianity for thousands of years. He’s establishing an umpire of sorts by giving authority to one man, Peter, and Peter’s successors to make the final calls for the Church. 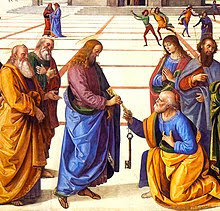 Jesus settles the question about who will take over once he’s gone, and settles an even bigger question for the future of the Church: Who has the final authority to interpret the Word of God?

Martin Luther challenged this authority in the 16th century, advocating “the priesthood of all believers” had ability interpret the Word of God without the need of a Papal authority.

He advocated the plain sense of the bible would be obvious to everybody who read it in their own language.

But when put into practice, Protestantism has devolved into 30-thousand denominations around the world today enforcing their own rules, their own authority and their own interpretations about things like church, church/state, Eucharist, sacraments, etc.

This is a problem in light of Jesus’ great prayer that all of his disciples, all his followers, might be one.

Sadly, it is our penchant for human divisiveness that prevents this unity from happening.

Bishop Robert Barron says, “Somehow it seems to me we do need a voice finally that can determine for us the truth of things when there is this tremendous disagreement.”

This is why the Catholic Church employs an umpire of sorts in Papal authority. The Barque of Peter has served as our umpire for two thousand years of our Catholic faith.

Sure, you might say, mistakes have been made by these human Popes throughout the centuries.  And you’d be right.  Even Peter made mistakes after being told by Jesus that “upon this rock I will build my Church.” He betrayed Christ in his hour of need.  But Peter was that rock.

Peter’s successor is that rock, the living voice that determines the right and the wrong of essential matters in the Church today.

We like to boo umpires in baseball games. But I had the honor to work directly in front of umpires (men and women we called “Blue” due to their blue uniform) during my decade playing competitive hardball as an adult. I was a catcher for most of my time playing the game. 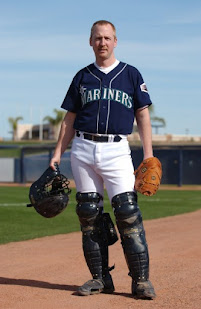 Some umpires were good (even excellent). Some not so good. But ultimately the game needed an umpire or our weekly contests around the baseball diamond would likely end in chaos.

I loved my place right in front of the umpire. It allowed me the space to respectively question the strike zone and some of the calls that “Blue” would make.

Bishop Barron agrees with the umpire analogy in making tough calls, saying, “without the umpire, without that living voice… the game will soon devolve into bickering. If you love the game and you want it to go on, you reverence the fact that there is a voice, a clear voice, a living voice, that can determine fair or foul, right or wrong, ball or strike.”

And so it is with our Church.

Barron says this also the appropriate role of the Church’s authority, “not to be brooding over the conversation of the Church’s life, but to be intervening when it has to.” 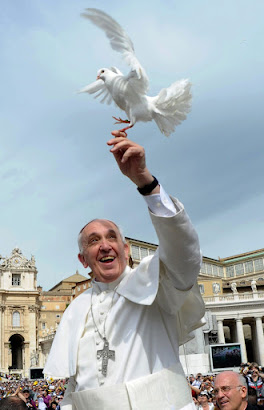 Pope Francis currently holds the keys to the Kingdom of Heaven in his role as Holy Father. He has chosen to employ the synod of Bishops (informed by the people of God) to provide this authority, this umpire, during his Pontificate.

In many ways, Pope Francis has put into place the leadership structure proposed by Vatican II.

What a blessing for our Church moving forward.

What a beautiful way to lead, guided by the gifts of the Holy Spirit.

This, my sisters and brothers, could become our field of dreams if we choose to live into this new reality for the Church. To do this, we must express our concerns to the Bishops and support them when make the right calls.

This is how we serve Christ in unity with the Holy Spirit.

Posted by iServant Media at 12:30 PM No comments:

When we take our eyes off Jesus, we tend to sink, to fail, to fall. But when we keep our eyes on Jesus, we rise, we sail, we soar. 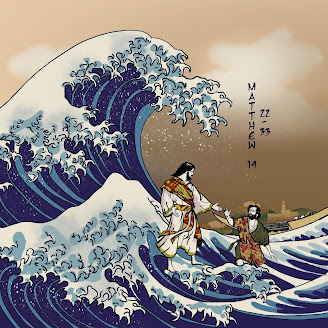 Jesus is talking today about conquering our fears and doubts by trusting in him. This applies to everything in our lives if we just heed His words of encouragement: "Take courage, it is I; do not be afraid."

The trials we face in our lives tell us a lot about God and about ourselves.

Something Seattle Bishop Muggenborg said about this scripture hits home, “Sometimes we only discover our potential when we have to utilize every resource for our survival. Sometimes it is in the midst of our darkest night and greatest feelings of abandonment that we realize God has been with us all along… 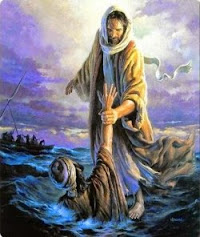 Sometimes we can be like Peter and ask God to prove Himself because we doubt His presence in the midst of our life struggles as well. Sometimes we can think that we should be able to overcome all our life challenges and problems in spectacular ways as a witness of our discipleship. The reality is that our lives are filled with weakness, tragedy, and uncontrollable circumstances that sometimes make us feel like we are sinking. That’s not a sign of our lack of faith, or of God’s absence, but can be the motivation for us to call out to God as our Savior. Remember, Jesus can't be our Savior if we don’t acknowledge our need for a Savior. Peter had to be brought to a desperate state before he called out to the Lord to be his Savior, and sometimes so do we.”

Don’t we all experience these moments in our lives?

Lately, the news of the world is causing much fear and doubt, testing all our faiths. Now, more than ever, we need to remember Jesus’ words, "Take courage, it is I; do not be afraid."

It was exactly eight summers ago this month that I went on a nearly fatal kayaking trip from the Mukilteo waterfront. 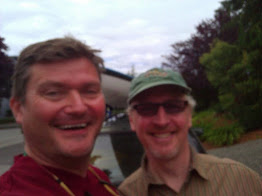 A buddy joined me, a meteorologist and longtime TV forecaster.

As we were about to set off, I asked him if he was at all worried about the odd skies looming over Whidbey Island.  He told me he’d keep an eye on it, but otherwise wasn’t too concerned.

So, we launched, slowly paddling around the Mukilteo Tank Farm toward Everett.  As we cleared the long pier of the Tank Farm and entered open waters the waves started to get a little rougher.

That crazy sky was starting to move overhead. Winds were kicking up. Waters began to roil. But we kept paddling. 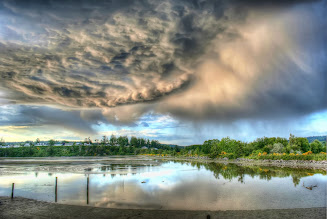 Eventually, waves of two to three feet were breaking over the boat.  So, we decided to turn around and head back to our launch point.

Just off the end of the Mukilteo Tank Farm pier, a rogue wave sideswiped my kayak, flipping the boat in rough waters.  I quickly climbed out from under a capsized boat.

Seconds before this all happened I was in deep prayer, asking, “Lord Jesus, I’m only two months away from ordination and now I’m going to drown on Puget Sound? Why make me go through four grueling years of formation only to take my life now? What did I do wrong?  Are you trying to tell me something?”

But the minute my body hit the cold Puget Sound water, an unexplainable calm came over me and I knew I was going to be OK.  Truly, it was an indescribable peace. 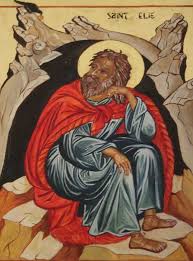 Just like Elijah, I didn’t hear the voice of God in the roaring of the seas or the rushing of the wind, but in a quiet whisper -- underwater.

It was almost as if Jesus was saying to me in the quiet of my heart, "Take courage, it is I; do not be afraid."

Now I must confess. Kayaking was a new endeavor for me that summer. To be truthful, I had not taken any safety classes yet and not learned yet how to get back in a boat once capsized or roll a boat from a capsized position.  These are things every experienced kayaker knows how to do.

I emerged from underwater, thankful I was wearing a good life vest, grabbed my 17-foot kayak and started to swim toward shore.

We were nearly a quarter mile from the beach and knew I’d have to pace myself to get there and not let go of my boat.

But the whole time I paddled to shore, I knew I’d be OK.  Rough waters, salty gulps of seawater, and all. 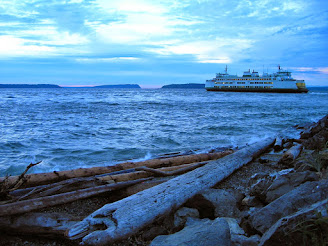 There was absolutely no fear. No panic. Just calm.

Now, perhaps you were thinking I was going to say Jesus appeared, I picked up my boat and walked across the water with Christ?

My faith is strong, but I guess, like Peter, not that strong.  But Christ was present in my experience in a deep and meaningful way, calming the stormy seas of my heart, grabbing me by hand and leading me to shore, and silencing all my fears.

Sure, it’s sometimes easy to get too focused on the wind and the waves encountered in the storms of our life experiences, and get overwhelmed by fear and doubt, but let us never take your eyes off Jesus. And hear his voice saying, "Take courage, it is I; do not be afraid." 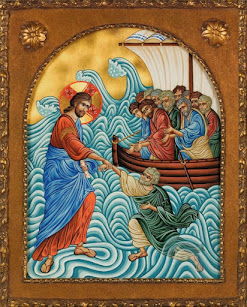 And always remember, sometimes the Lord speaks the loudest to us in that “tiny whispering sound” in our hearts.

Posted by iServant Media at 4:08 PM No comments: