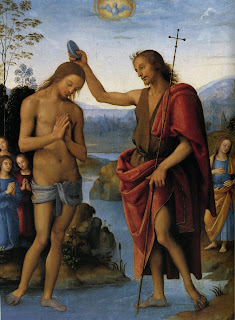 Today we celebrate the birth of St. John The Baptist.

So, what do we think of when we think of John The Baptist?
Thanks to Luke's Gospel, we know some personal things about John The Baptist.  We know he was Jesus' cousin.  We know the baby inside Elizabeth leapt for joy at meeting his cousin Jesus for the first time.  We know he was born six months before Jesus.
John had his whole life set out before him at birth when His Father Zechariah proclaimed, "You my child shall be called the Prophet of the Most High; for you will go before the Lord to prepare his way."

But as great as John The Baptist would become John always knew there was one greater than he.
"What do you suppose that I am?  I am not he.  Behold, one is coming after me; I am not worthy to unfasten the sandals of his feet."
These words from today's second reading from Acts of the Apostles show us how to orient our lives to Christ.
When we think of John The Baptist's birth we also should think of the Summer Solstice.
Why's that?
Well, the Summer Solstice is one of the reasons the birth of St. John the Baptist is celebrated this time every year.
The Summer Solstice is the longest day of the year.  It's the exact moment when days start growing shorter.  Or the sun begins to diminish in light.
The Winter Solstice is the shortest day of the year and nearest to Christ's birth.  It's when days start getting longer.
The Winter Solstice is known as the birth of the sun… both s-u-n and with Christmas S-o-n.
"He must increase; I must decrease.”  These Gospel words help us to understand this concept better.  These words also help us to understand John The Baptist's life when compared to Christ.

For "John understood his role was to prepare the way for Christ, then step aside."
John The Baptist teaches us we all must decrease in order that Christ increases in our lives.
I recently read a story about a perfect example of this. This man's name was John, too.
He was a lawyer who eventually became the Chief Justice of a large U. S. Federal District Court.
As a judge and Catholic witness, he enjoyed mentoring young Christian attorneys.  He believed their faith in Christ would give them a better moral foundation for practicing law.
For clerks who worked for the Judge, "he was more a father figure than boss."  He knew their families and always wanted to hear news about them.
He went to Mass daily.
When this judge received death threats several years ago, he was assigned a U.S. Federal Marshall to watch over him 24/7 for a month.
The Marshall told the judge after the assignment, “Judge, I’m a Catholic, but I’ve been to Mass more in the last 30 days than in the past 10 years.”
The judge was filled with grace.  He was devoted to St. Thomas More, a martyred Catholic lawyer.  In fact, the judge was an expert on the saint.
He was known for having great relationships with politicians on all sides of the political aisle.  Even if he disagreed with someone politically, he took the time to get to know them personally and become their friend.
He and his wife were married 40 years.  He had three sons and five grandchildren.
One day, after Saturday morning Mass this man went to see a longtime personal friend.   The friend was a politician meeting constituents one-on-one on a sunny winter morning outside a Safeway store in town.
The judge just wanted to "drop in" as a courtesy and say "hello."
As the judge showed up, political aides recognized him and asked if he wanted to jump the line, knowing the judge must be busy.  But he said he was happy to wait his turn.
As he stepped up to talk to Congresswoman Gabrielle Giffords, a gunman walked out of the store, rounded a corner and opened fire on the Congresswomen and those around her.

When Giffords went down, Chief Judge John Roll threw himself on top of one of Gifford's staffers to protect him.  As he huddled over the injured man, the gunman fired a fatal shot into Judge Roll's back.
As he lay dying, people treating the wounded recognized him.   According to a Catholic priest Roll said, "I'm dying. Help those other people."  Those were his last words and exactly what happened. 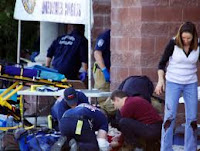 "He must increase; I must decrease.”


The man Judge John Roll saved that day is Ron Barber.  Two weeks ago, Ron Barber was elected to succeed Congresswoman Gabrielle Gifford who retired from Congress this year to tend to her long recovery from a gunshot wound to the head. 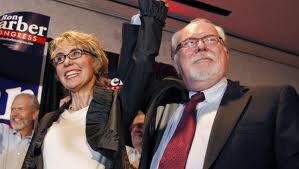 Judge John Roll was one of the six people killed that day in January 2011 in the desert town of Tucson, Arizona. 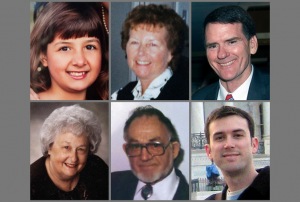 This life passes away quickly.  Eternity is forever.  As authentic Catholic witnesses, we are called to live lives of Christian service.
Today's first reading is one of the Prophet Isaiah's "Songs of the Servant of the Lord."
I can think of no better modern day servant of Christ than Judge John Roll.  He spent his days decreasing so Christ could increase in him through his service to others.  How fitting his name was John and we are talking about him today. 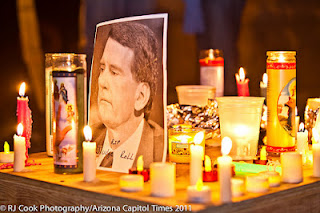 Isaiah's words are fitting for the lives of both Johns: "I am made glorious in the sight of the Lord, and my God is now my strength."
We are all called from our mother's womb to be great servants of the Lord.  How we serve may look different from the person sitting next to us in the pew today.  But each one of us is called.
We are all called to sacrifice the way Christ sacrificed for others.  Some of us are even called to give our lives.    But we are all called to be servants of Christ in building up the Kingdom and in doing so give glory to God. 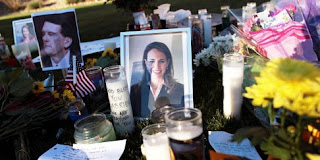 Inspired by Joe Sifferman's Homily for the Liturgy of the Hours at the February 2011 diaconate retreat
Posted by iServant Media at 1:03 PM No comments:

Ever doubt the power of words?

What we say and how we say it can have an immense impact on how we see things.

Be a poet.  Change the world.


Posted by iServant Media at 12:43 PM No comments: