One life
With each other
Sisters
Brothers 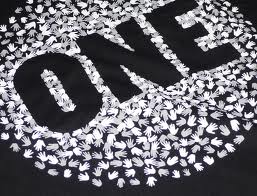 Some of you may recognize these as song lyrics.  They are.  They were written by a person some have called a modern day prophet; others call him a flashy, loud Irishman.
But this rock star in question does profess to be a disciple of Christ and most of his lyrics try to raise our collective consciousness to the needs of the world.
St. Paul uses the word "One" repeatedly in today's second reading to serve as a reminder of the Christian community's interconnectedness in the early years of struggle against a world that persecuted it, condemned it and tried to destroy it.
How different is that from today's world?
I think the lyrics from the song help us to see we Christians are all One and we have to "carry each other."
This is what John's Gospel is all about.  The Kingdom of God is something we can bring about by our own actions, but we also need God's help.

The person who wrote those song lyrics is Paul Hewson.  Most people know him simply as Bono of the rock group U2.
In 1985, Bono took a trip to Africa with his wife Ali to work for a month in an orphanage in Ethiopia.
The people of Ethiopia were being devastated by one of the worst famines in human history.  It impacted eight million Africans and killed over a million people -- mostly children. 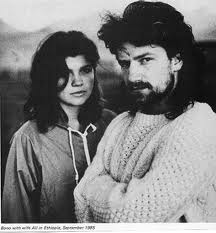 Bono and his wife were horrified by what they witnessed in Africa.  Some called it "a biblical famine in the 20th century" and "the closest thing to hell on Earth."
At the end of their journey Bono had an experience that would change him forever.  As they were about to leave the orphanage, a man ran up to with a young child and tried to hand the boy to Bono.  The African man said, "Sir, will you take my son home with you?"
Both men knew if the boy stayed in Ethiopia he would likely die from hunger, but if he left Ethiopia he would live.
What to do?
With tears welling up in his eyes, Bono's said he could not take the boy with him.
The conversation shook his soul to the core and changed the path of his life forever. 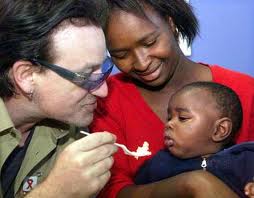 In that moment, God planted a Mustard Seed in his heart for the people of Africa.
It also inspired one of U2's most powerful and beautiful songs:  Where The Streets Have No Names.  That song is a metaphor for his African experience.  And a metaphor for heaven. 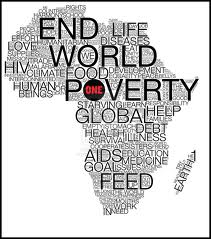 Since then, Bono founded the One Campaign – The Campaign To Make Poverty History in Africa. 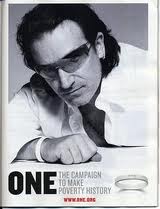 The rock celebrity quietly goes around the globe arm-twisting world leaders to commit more of their country's resources to poverty and disease control in Africa -- fighting such things as AIDS/HIV, malaria, and national debt that is preventing many African nations from getting on their own feet economically.
Bono is still talking about Africa today -- over 25 years after that moving experience. 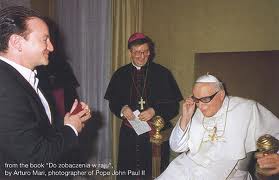 Pope John Paul the Second was a big supporter of Bono's efforts in Africa and even wore the rock star's signature sunglasses for an infamous photograph that I'm sure created quite a stir around the Vatican.
Bono was one of the key activists who helped The Pope with his Jubilee 2000 effort by inspiring a "Drop The Debt" campaign designed have First World (rich) nations forgive the debt of Third World (poor) nations.  This is reminiscent of the biblical jubilee of the Old Testament.
As Bono put it at the 2006 National Prayer Breakfast in Washington DC, "This is not about charity.  It's about justice."
He added, ''Where you live in the world shouldn't determine whether you live...  God is watching how we respond to Africa."
Like the Prophet Elisha in the first reading who encouraged pious Israelites NOT to give their "first fruits" food just to the prophets and religious, but to share it with everybody so all could eat, God wants to work through each of us to make sure ALL in this world have their basic needs met.  So people don't starve and have access to drugs for treatable diseases. 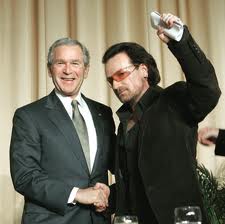 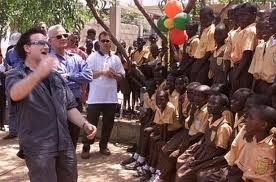 Christ sends people like Bono into our world to remind us we are all in this together.   We all have to look out for each other and take care of each other.
That's what our Gospel message is really all about today.  But human initiative always needs God's help to succeed.
As we heard, Jesus sees a massive crowd and realizes this tired hungry group needs to eat.  The disciples don't know what to do and are starting to panic.
John's Gospel tells of how Jesus concern for the people inspires a young boy's generosity that eventually would lead to a miracle that allows over 5-thousand people to get their fill.  But it started with a single act of human kindness.   Then God did the rest.
As we heard, there are leftovers from this feast.
In our privileged American experience, we have leftovers... leftovers of our time, our talent and our treasure.  These leftovers can be shared with others in our communities, in our nation, and in our world.
It's amazing the difference one person can make in this world.  If only we see ourselves as one People of God.
What is God calling you to do?
Posted by iServant Media at 9:49 PM No comments:

Take A Space Trip Around The Earth

A remarkable God's eye view of our lonely planet.


This is Our Planet from Tomislav Safundžić on Vimeo.


Posted by iServant Media at 9:42 AM No comments:

In Wes Howard-Brook's book Unveiling Empire, it is put best, “In the Bible there is really only one story:  that of a people struggling to leave empire behind and set out to follow God.”  Or when Bono sings so eloquently in U2’s song 40, “I will sing, sing a new song,” he’s telling God of his desire to live in the New Jerusalem. 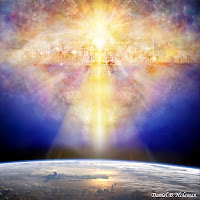 You know what’s interesting about that song?  U2 will play it as the last song of their concert, but only if they feel “God is in the house.”  I guess the same can be said about John who wrote Revelation.  If God’s “in the house” the New Jerusalem is alive and well.  If not, welcome to Babylon.
In Revelation, John is writing about the contrasting realities of Babylon and the New Jerusalem as experienced at the time of the Roman Empire.  For John, the veil of imperial propaganda is lifted and he sees the “Roman Empire was ‘really’ Babylon.”  Babylon’s myriad of evil ways are the status quo in the Empire of Rome (murder, whoring, illusion, sorcery, worship of idols, etc.), but Babylon could just as easily be the Empires of Egypt or Assyria or Greece or even Jerusalem trying to live into Empire in the ancient world or Israel today, or the British Empire at its height of power or United States today.
“Babylon stands in diametric contrast to the ways of God. “   In other words, Babylon is an empire of humanity and New Jerusalem is God's empire.  When John talks about the fall of Babylon, he’s not talking about a future event (although Rome does fall eventually).  He’s talking about the fall as then or now.
In Unveiling Empire, “Babylon exists wherever human society becomes empire, asserting its power over creation and usurping the privileges of God.  New Jerusalem is found wherever human community resists the ways of empire and places God at the center of its shared live.”
All of this gives context to the meaning of the "fall of Babylon" in Revelation 17-18 and especially the often-times misunderstood term “the end of the world.”  As I understand it, the "fall of Babylon" and “the end of the world” are whenever we walk away from empire and toward the New Jerusalem.  “Come out!”   John uses these words as encouragement to his people, but also as warning to members of the early Christian Church (or ekklesiai).  The same warning still rings true for Church today.
How many of our parishioners worship the idol of the almighty U.S. dollar and give little back to the poor and marginalized in their communities?   How many of our parishioners believe the illusion that America is the police force of the world?  How many of our parishioners are supporters of the death penalty, but vehemently against abortion?  Or against government spending for the poorest of the poor?  The New Jerusalem calls us to “come out” of Empire and help build the Kingdom of God here and now. 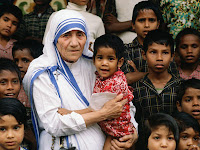 The "fall of Babylon" repeats itself over and over again.  If we chose to live apart from an empire reality that is all about profit or status or wealth, if we embrace what it means to be a member of the New Jerusalem as “Church,” our wealth is truly in heaven, our status is that of disciple of Jesus Christ and our profit is seeing to the needs of the poorest and most marginalized in our world.  When I think of those who lived the New Jerusalem, I think of Mother Teresa or St. Francis of Assisi.  They gave up everything Babylon has to offer to serve the Kingdom.  And John’s Revelation is asking us to do the same and enter the New Jerusalem. 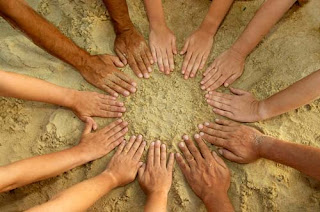 Posted by iServant Media at 7:55 PM No comments: