We are never far from God’s love, no matter how much we mess up our lives. 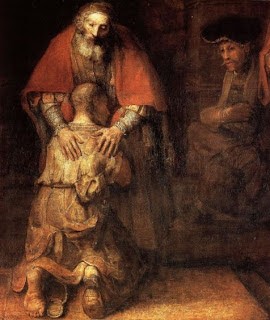 Catholic Catechism tells us, “Christ’s parable of the prodigal son illustrates the sublime meaning of his earthly ministry, which is to forgive sins, reconcile people to God, and lead us in true happiness.”
As Jesus subtlety points out to the Pharisees and scribes, it’s not their job to Judge.  It’s God’s job.  He then reminds them God is all-forgiving.  I’m sure this concept blew their “elder brother” minds.
Some scholars say that the father in the story is representative of God. Others say the father is Christ.
In this homily, I’ve intentionally chosen to have the unseen mother be representative of Jesus Christ.
It is my great hope the story may help us all to better hear today’s Gospel message.
Perhaps there’s someone in our lives we need to forgive or to ask for their forgiveness.
The parable of Prodigal Son’s mother:
____________________________________ 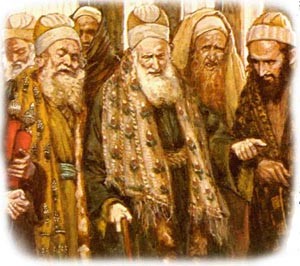 Then Jesus looked directly at the Pharisees and scribes and said; “Now the mother was watching all these things. Her heart ached when her youngest left home with his inheritance.
She told him, ‘Son, you will always be welcome back in this home. My love for you is great and I wish blessings upon your journey. Peace be with you.’
Her older son overheard the conversation and chastised his mother for telling his younger brother he can return whenever he wishes.
‘Father would never welcome him back in this house again.’
But the mother said, ‘loyal son of mine, I love your devotion. But harden not your heart toward your brother.  For he is lost and needs to find his way home again.  Forgive him. Love him. And pray he returns someday.’
But he stormed away in anger.
The father heard what the mother said to the older son and approached her.
They gave a knowing look to one another and both heaved a heavy sigh. 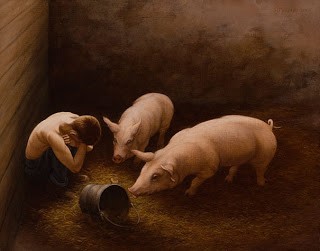 For how long would it be until the younger son returned?  Would he ever come home or would they never hear from him again?  The pain of not knowing was almost unbearable, but life goes on.
After years and years of worry, the mother had tears in her eyes as she saw her husband run off to greet the figure growing on the distant horizon.
For her heart knew her youngest child had returned home for good. The family was restored. Her heart sang. 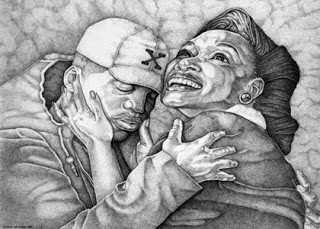 She was the first to tend with loving care to her son’s painful blisters on his feet and give him water from the small jug she carried hurriedly out to him.
‘Blessed be the Lord, for the Holy One has returned our son home to us,’ she cried as she served him.
‘Forgive me, mother,’ he said in a quiet whisper. ‘You are forgiven, my son.’
Later as she was preparing the fatted calf for supper, her older son came to her in the kitchen to grumble about his conversation with his father.
‘Is this house mad? Father is acting like a man possessed. Mother, it is not fair that my brother be treated like royalty after squandering all Father gave him on a life of debauchery. I will not stand for this!’
His mother said in reply, ‘My love for you is no different than my love for your brother. He has asked for our forgiveness. He has been forgiven.
Remember son; this is the home of your mother and father. It is not your home yet. But I do love your passion and your desire to do what is right. 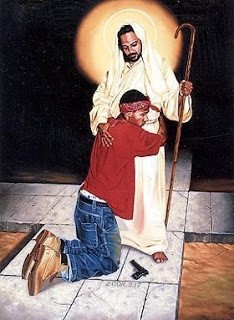 You should tell your brother how you feel, but do so with love and compassion and don’t be self-righteous.
I pray you will find it in your heart to forgive him.  For he loves you very much and it is your example of being a faithful son he will follow from now on.  So, be a good and loving example as your father and I have set for you both.’
But the older brother walked away in anger.
Once again, his mother had offered wisdom that he would wrestle with for days before finally talking to his brother and reconciling their relationship.”
_____________________________________ 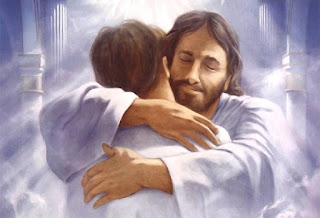 God so loves us.  No matter how much we screw up He’s always waiting for us to return home.
And God does not want us to judge others, but use our energies to serve Him better.
The Catholic Catechism teaches us, “we must always entrust the judgment of a person to the mercy and justice of God.”
If Christ appeared before us today and showed such radical love and forgiveness, would we be cool with it?  Or would we condemn him? 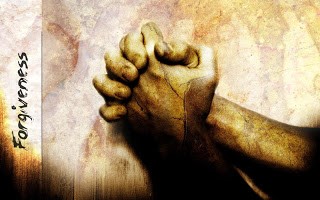 As we ponder these questions, I have one final thing to ask: who in our lives do we need to forgive or ask for their forgiveness.


My prayer is that we will act upon this powerful Gospel message and let Jesus Christ heal that relationship.
Posted by iServant Media at 9:20 AM No comments: 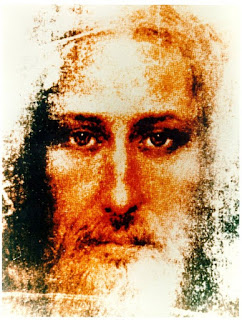 There are three lessons from Jesus today.
First, Jesus reminds us that we each must carry our own cross. If we do not, we cannot be his disciple.
Second, Jesus uses provocative language about hating one’s family to show how he wants each of us to love him above all the people in our lives.
Third, Jesus wants us to renounce all of our possessions; all of our material baggage, all of our positions of honor, all of our positions of power. And make Jesus first and foremost in our lives.
I'd like to share a story about a boy I know.
When he was seven, his baby sister died. She had a congenital heart defect. The little girl lived to be three and her suffering made a big impression on her big brother.
Some of the boy's first memories are of going to the hospital to see his little sister held up to a window as he stood with his grandmother outside.
The little girl would die in the arms of their mother on the way to the hospital after a long illness.
Fast forward seven years, and the boy was now a teenager. He was 14 and in middle school, but he was hiding a dark family secret. His sister's death had triggered his father's mental illness. For several years, his father checked into mental hospitals for electric shock treatments in hopes of ridding him of his demons. It was an all too common drama for his mother, two brothers and himself. One the boy was too embarrassed to share with his friends.
The boy had a paper route and was up at the crack of dawn every morning to deliver the daily news.
One November morning as he was returning from his paper route, his father met him at the door.
It was a workday, but his father was not dressed for work.
The 40-year-old man had eyes red with tears as he told the boy he loved him and then said "goodbye."
The boy knew something was wrong. But he didn't tell anybody. Instead he just dressed and went to school.
That afternoon, his uncle picked him up after sports practice and told him his father had committed suicide.
The boy started to cry.
Just then, two of his friends came up and said "Hi," and the boy buried his tears of anguish and pain, putting them away for many, many years.
Fast forward again and the boy was now a man. He has two children of his own and a beautiful wife. His life has been extraordinarily blessed. But there's an unresolved wound in need of healing.
The man goes to Church with his family, but is not really buying this faith thing. His wife signs him up to be a lector in the parish. He studied speech in college. She thought it was a good place for his talents.
He agreed, but only to keep his faith-filled wife happy. It wasn't going to change how he felt about going to Church. For him, he was just going through the motions.
The man trained with a long-time lector in the parish asking the lector if he should count to five or ten on the "prayers of the faithful" when it called for "prayers in the silence of our hearts." The patient trainer told him to "just listen for the Holy Spirit." This confounded the man.
As he began to serve as a lector, the man could swear the readings he read and heard every week were aimed directly at his life. This startled him.
Over the next advent season, the man had an amazing experience. As he read and listened to the readings at Mass, he felt he was being called to do something he swore he would never do.
So, one day after Mass, he told his wife he wanted to go for a drive to a special place to do something important.
As they approached the place, his young boys asked, "Daddy, where are we going?" The father explained, "You know my dad died when I was a boy. This is the cemetery where he's buried... next to my little sister."
As the man walked up to the tombstone, he knelt and did what he heard the Word of God telling him to do.
He forgave his father.
As he forgave his father, a weight was lifted off his shoulders and he began to cry.
And in his tears of sorrow and joy, the man realized the Father he was really forgiving was God the Father. And the man wept even harder.
Jesus knows we each carry our own cross. We each are called to radical detachment from the things that keep us from the Kingdom.
I think many of you have probably already figured out the identity of the man whose life was changed by the word of God. 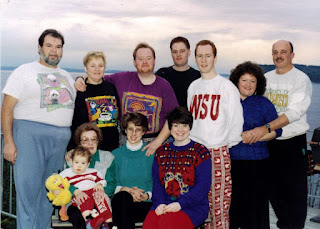 The wisdom of God spoke deeply through the events in my life.
I’m sure you’ve had your own experiences where God spoke through your life.
Jesus is telling us today about the cost of discipleship.
When we turn our lives fully over to Jesus everything changes. 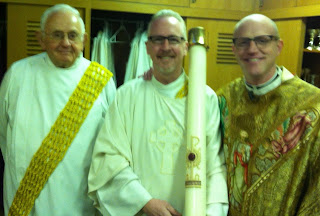 Yes, we all will be asked to carry our crosses, but our lives will be ordered in such a way that we can bear this pain and help others to carry their own crosses.
To bear our cross means much more than patiently accepting our human condition of suffering, illness, weakness and the like. To carry our cross means to voluntarily accept all that comes from following Jesus: pain, sacrifice, ridicule, rejection. 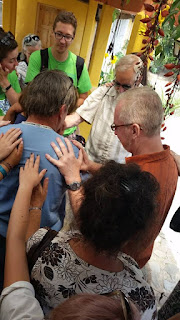 Some will be unprepared to make the necessary sacrifices to make Jesus the top priority in our lives.
But this is what we are all called to do.
To hold nothing back. To accept all of our lives’ experiences as the cross we must carry.
This is how we show our commitment and love for our savior and king Jesus Christ. And how he can transform our lives in beautiful ways.

Posted by iServant Media at 10:42 AM No comments: