In today’s readings, we hear about Jesus experiencing murmuring from the Jewish people. Those opposed to what Jesus is saying about the Bread of Life also doubted the truth about God.
We see the Prophet Elijah both discouraged and despairing, fleeing into the desert in order to save his life from those who did not like his message. And yet once there, praying that he dies. Elijah would become one of the Jewish faith’s most important prophets for telling the truth despite stiff opposition.  He was also with Jesus at this week’s Feast of the Transfiguration.
And we hear St. Paul reminding us to remove all anger and bitterness, and instead be kind, compassionate and forgiving. And so be imitators of God.
These are stories of our complex human condition, our difficulty in trusting in our creator and our inability, at times, to hear the truth.
I heard an amazing story about Pope Francis during my recent Maryknoll mission to the U.S./Mexico border to learn about border issues. 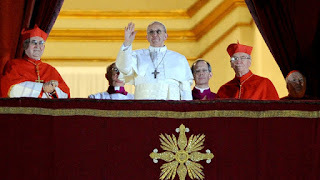 Days after being elevated to Pope, the Holy Father went to his Secretary of State and said, “I want to go to Lampedusa.” This is an island on the southernmost tip of Italy. The place has become a tragic shore for immigrants and migrants who risk life and limb to find a better world. Many have lost lives from capsized boats in the Mediterranean and washed up on those shores. Perhaps you’ve seen the pictures of these tragedies. 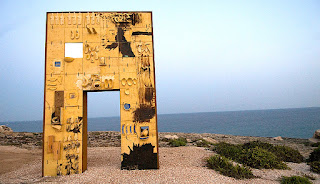 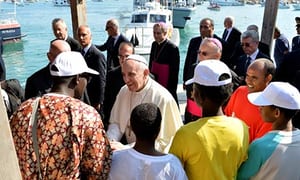 A few weeks later, the Secretary of State got a call from the CEO of Alitalia Airline saying, “I think you should know a man named Jorge Bergoglio has just booked a ticket on our airline to Lampedusa.”

Francis did go to Lampedusa four short months after becoming Pope and his trip would set the stage for one of the biggest priorities of his Pontificate: changing the global conversation about immigrants and migrants to a Catholic perspective.
In today’s Gospel, we see Jesus saying something that brings the same kind of murmuring heard every time Pope Francis discusses Catholic teaching on the issue of immigration and migration. 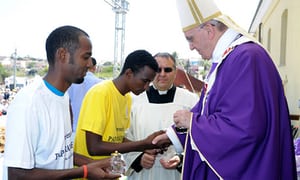 I’d like to ask you to go on a journey with me. First, if you would be so inclined, please close your eyes and try to envision what heaven will look like. Now, find your neighborhood in the Kingdom. Look around the streets and look at the faces of those there with you in the New Jerusalem. Notice anything?
My bet is our neighbors in heaven will be the same people some might not want as our neighbors in this country now. There we will see neighbors of Mexican or Guatemalan descent or neighbors of Middle Eastern descent.
Now open your eyes.
Pope Francis sees the world through the eyes of God. As Catholics, he encourages us to do the same.
The border issue is a complicated mess. No one would disagree with that. But it is one in desperate need of our Catholic common good, urgent attention and our prayers.
The U.S. Bishops, including our own, following the principles of Catholic Social Teaching and the example of the popes, have been resolute in their support of the duty of Catholics to welcome migrants and refugees. The Bishops affirm the right of nations to secure their borders while at the same time calling for immigration reform. They also firmly oppose any actions that break up families, dividing children from their parents, and husbands from their wives.
The Bishops in our state have a new website on the issue. I’ve linked it to our parish Facebook page (Link to Washington Bishop's website HERE). 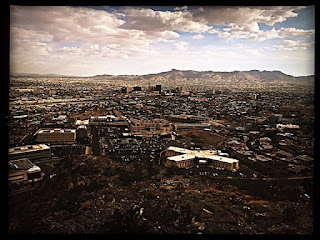 Our trip to the El Paso and Ciudad Juarez border was eye opening and transformational in many ways. 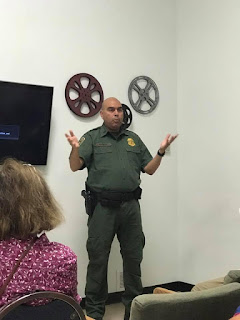 There, we met with the Border Guard to hear what they do to protect lives at our borders. In many ways, we found angels not unlike those caring for Elijah’s physical needs in today’s first reading. When encountering people trying to cross the border illegally, they find and minister first to those needing food and water. Many times this means letting the so-called “Coyotes” go. “Coyotes” is a nickname for those who smuggling immigrants into the US illegally.
We also met with families who had just been reunited after two months of separation. It was evident to us that the children and the adults had been traumatized. 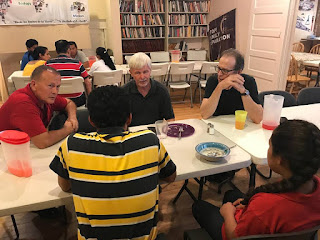 Most we met had legally presented themselves at the border as asylum seekers, only to be separated and put into detention for two months. Men would go to one facility. Women to another. And the children would be taken from their mothers and fathers and put someplace else.
Next we served at a Sisters of Loreto nursing home, where dozens of families were staying short-term until their cases were resolved. All the men wore ankle bracelets and all families had court dates scheduled on their asylum cases. 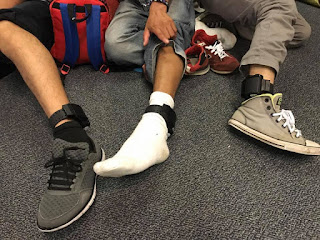 One mission participant is originally from Peru. Helena’s lived in the U.S. now for seven years and teaches kindergarten on a Native American reservation in Wisconsin. The minute the staff found out her background and fluency in Spanish, my friend was immediately placed with the kids.
Your’s truly was assigned bathroom cleaning duties. 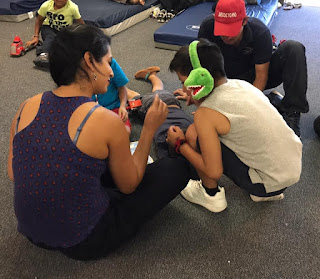 After finishing my assignment, I went down to see how Helena’s experience was going. There in the middle of the floor was a four year old boy crying, with his crying father looking on. Helena was comforting the boy.
As we were leaving, the boy wouldn’t let go of Helena. His father cried all the harder. As Helena finally handed the boy back to his father, she turned to me and said, “The boy asked me if I would be his mommy. I told him I could not be.”
Helena immediately broke down in a puddle of tears as we departed the center. 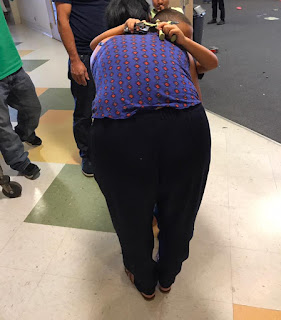 Saint John Paul II said during his pontificate: “If the ‘dream’ of a peaceful world is shared by all, if the refugees’ and migrants’ contribution is properly evaluated, then humanity can become more and more a universal family and our earth a true ‘common home.’”
Pope Francis reminded us during his 2015 trip to the United States of an important point to consider when thinking about immigrants and migrants: “We, the people of this (American) continent (north, south and central), are not fearful of foreigners, because most of us were once foreigners. I say this to you as a son of immigrants, knowing that so many of you are also descended from immigrants.” 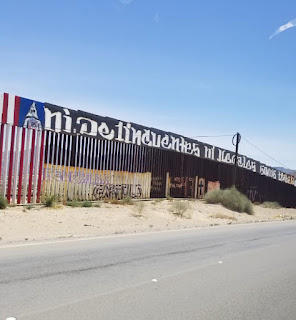 Jesus tells us to love our neighbors as ourselves and to welcome the stranger. Solidarity with our neighbors and strangers are actually commands from Christ.
Pope Francis wrote in his Message of Peace released on New Year’s Day something worthy of reflection: “Many destination countries have seen the spread of rhetoric decrying the risks posed to national security or the high cost of welcoming new arrivals, and thus demeaning the human dignity due to all sons and daughters of God. Those who, for what may be political reasons, foment fear of migrants instead of building peace are sowing violence, racial discrimination and xenophobia, which are matters of great concern for all those concerned for the safety of every human being.” 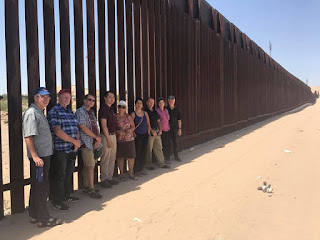 As St. Paul reminds us today: “All bitterness, fury, anger, shouting and reviling must be removed from you, along with all malice. And be kind to one another, compassionate, forgiving one another as God has forgiven you in Christ. So be imitators of God.”
So, as we ponder what our neighbors will look like in heaven and who will be in our neighborhoods here on earth, let us reflect on our human actions in this world and ask ourselves: am I building up the Kingdom or tearing it down?”
For in the Kingdom of God there are no borders.

Posted by iServant Media at 2:39 PM No comments: