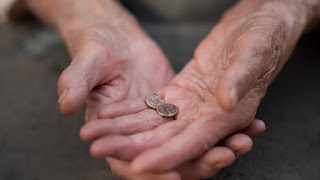 This weekend’s Gospel message compares the actions of a poor woman who sacrifices her all for the Lord with the behavior of Scribes who pursue false greatness and take financial advantage of widows in their care.
Jesus makes clear who we need to stand with.
Jesus also makes clear the importance of sacrifice as disciples.
This summer, I was blessed to participate in a week-long Maryknoll formation on global solidarity with the poor.
24 lay people, deacons, priests and nuns (including a Mother Superior from Tanzania) gathered at Maryknoll in Los Altos, California, to learn what our church teaches about standing with the marginalized, the poor, the despised and the outcast. 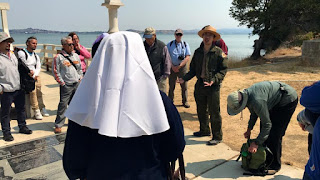 Our program included a field trip to Angel Island, the Ellis Island of the West from 1910 to 1940.
During its years of operation, Angel Island was a center of detention for immigrants seeking asylum or searching for a better life in America.
Many of those who passed through Angel Island were from China. But others came from all over the world. 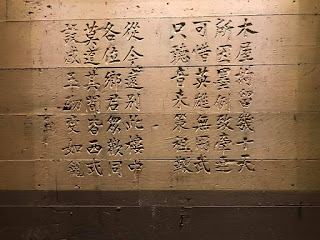 The site became a military base during World War Two and eventually was slated for demolition until a California historian toured the site in the 1960s and discovered beautiful hand-carved calligraphy in many languages on the walls of the former detention cells.
The ghosts of Angel Island speak through their words.
I’ll share just one of the messages. This one’s entitled:
Random Thoughts Deep at Night
In the quiet of night, I heard, faintly, the whistling of wind. The forms and shadows saddened me…
The floating clouds, the fog, the darken sky. The moon shines faintly as insects chirp. Grief and bitterness entwined are heaven sent. The sad person sits alone… 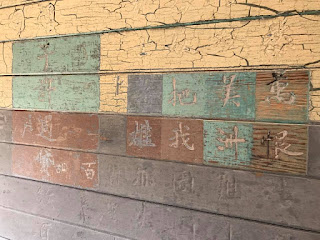 The carved calligraphy had been puttied in and painted over by the military. But now have been restored for generations to come and see and learn of this powerful chapter in U.S. history.
Angel Island also was dubbed the Island of Sadness for the racist treatment experienced by thousands of people who passed through its doors.
It was there I learned of a female deacon named Katharine Maurer. 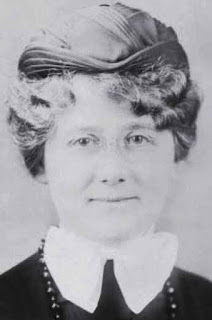 To thousands of people who knew her, she was called in Chinese Kaun Yin, the Goddess of Mercy. To others she was simply known as the Angel of Angel Island.
Maurer was a Methodist Deaconess assigned to Angel Island upon graduation from formation in 1912.
Protestant reformers in the 1800s envisioned a better world based on the principles of Jesus’s teachings. Some of these activist churchwomen were Methodists who launched a deaconess movement in 1888 to minister to the most-needy in society.
The unmarried 29-year-old Maurer was initially dispatched by this movement to San Francisco to minister to picture brides sent from Asia to marry men in the United States. 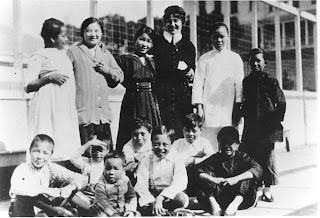 In today’s second reading from Hebrews we hear how Jesus is the perfect sacrifice.
Katharine Maurer spent most of her adult years perfectly sacrificing her own life in service to immigrant sojourners who came through Angel Island.
While Deaconess Maurer was not a widow, she was a relatively poor single woman who poured out her own life for Christ, standing with the poorest of the poor.
She had no surplus wealth, but gave all she had to people from faraway lands.
Deaconess Katharine understood what it was like to be an immigrant. Born in Canada, this German Canadian became a U.S. citizen at the height of World War One when Germans were viewed with much suspicion and contempt. 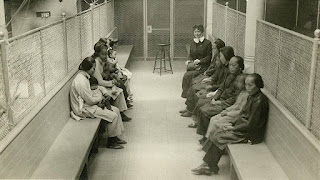 This experience helped her to relate to her immigrant friends better. Her greatest gift was an extraordinary ability to connect with people from all parts of the world.
Deaconess Maurer quickly became the station’s chief welfare or social worker, establishing English classes, a library, and organizing clothing donations for detainees.
Much of what she did was counsel people.
Maurer said in an interview, “often… there is little one can do except listening, trying to comfort, without trying to give anything, just helping to bring about that release that comes from sharing troubles, and sometimes in the telling one finds solutions.” 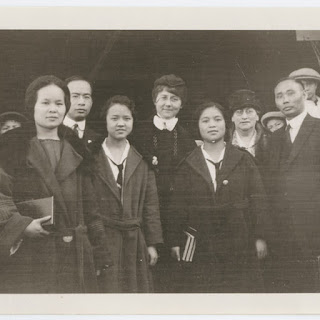 Many left transformed by their encounter with the deaconess. Some families even honored her by naming daughters after her.
Deaconess Katharine never sought after honors in the human world, but was treated like a saint by women and men who experienced her loving tenderness at Angel Island.
She worked at Angel Island for nearly 30 years and served immigrants another 11 years in San Francisco after the detention center closed its door. She retired at age 71 and died about 10 years later in 1962. 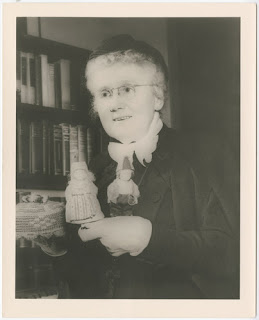 In today’s Gospel reading, Mark contrasts the behavior of scribes in the temple who sought false greatness with the actions of a poor widow who was deemed great by Jesus for giving her all.
The rich including the Scribes gave to the Church from their surplus wealth.
The poor widow gave everything to the Church, putting wealthier people to shame for their lack of generosity by comparison.
Much like Deaconess Maurer who gave everything in service to the poor on behalf of the Church. She’s an example for us all on how to give one’s life for the Gospel.
You may ask what about women deacons in the Catholic Church?  Perhaps you’ve even read that Pope Francis is studying the early Christian tradition of the female diaconate with an expert panel. 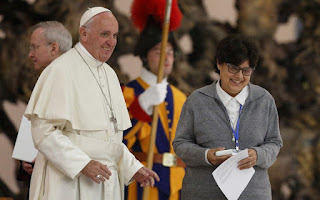 The two-year study project will issue its final report in the coming months.
The Cardinal in charge of the Congregation for the Doctrine of Faith cautions us all that the Holy Father only asked the group to study the issue of the female diaconate in the early Christian Church. This doesn’t necessarily mean that Pope Francis will allow Bishops to ordain female deacons.
The early Christian Church did have female deacons. We read about a deacon named Phoebe in St. Paul’s letter to the Romans. 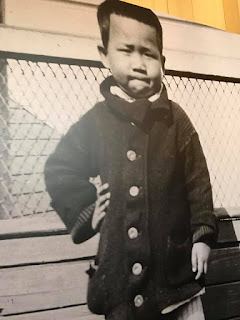 Not much is known about the role of female deacons in the early Christian tradition, but if more modern examples of female deacons, such as Deaconess Katharine Maurer, are any indication, I, for one, am grateful to these women for their diaconal ministry.
To stand in solidarity with the poor, we have to be like Jesus and first pay attention. We have to be like Jesus and respond. We have to be like Jesus and lead others to respond.
If we think we are too poor to respond, we have to trust in God like the widow who encountered the Prophet Elijah today and trust that if you do give to those in need, more will be given back to you in return.
As we all strive to live Christ’s mission of solidarity with the poor and marginalized, may we come to a greater understanding of the contributions made by all cultures, all peoples and all genders to God’s Church. May we all better learn to stand with the poor and respond to their needs. And may our Church be forever transformed by this call to global solidarity.

Posted by iServant Media at 1:35 PM No comments: