Snohomish County Catholics Prepare For Pope Francis Visit to US

IC-OLPH parishioner Julie Muhlstein wrote an informational article today about what Snohomish County Catholics are doing to prepare for Pope Francis' visit to the United States this coming week.
Some parishioners of St. Mary's in Marysville will join their priest Fr. Dwight Lewis in a pilgrimage to New York City and Philadephia. Archbishop J. Peter Sartain will be among the US Bishops meeting with Pope Francis during the visit. And we're doing some special things at Archbishop Murphy High School to share the Good News with students.
I will share updates daily (deacondennis.com) on the Pope's visit using multi-media sources. Please check back in the coming week to keep track of what Pope Francis is saying and doing in the US.

Here's a snippet of the article on what we are doing at AMHS:

"At Archbishop Murphy High School in south Everett, Deacon Dennis Kelly said students have been captivated by the messages of Pope Francis. ' He’s talking in their language,' said Kelly, director of campus ministry.
The school’s theology teachers will talk about the pope’s visit. And Kelly will offer daily multimedia recaps of the pope’s visit.
Pope Francis embodies the values of compassion, love and faith taught at Murphy, Kelly said. 'He resonates deeply with the Catholic students, and even some non-Catholic students. He speaks a language that feels like Jesus,' Kelly said.
The school has a big cutout figure of Pope Francis, he said, “and kids take selfies with him all the time.”
WSJ VIDEO TIMELINE - POPE FRANCIS VISIT TO US


I had an experience with Christ the other night.

While walking the streets of downtown Seattle, ministering to our sisters and brothers living on the streets with a group of clergy and lay people involved with Operation NightWatch, we came upon Gary.
Gary was lying down in some bushes near Cal Anderson Park on Capitol Hill and was having trouble getting up. We walked up to him to assist and Gary declared, “I’m drunk.”
We asked him if we could help him up and take him to a nearby bench. He said he’d rather be helped to a doorway of a building across the street so he could get his sleeping bag and go to sleep. 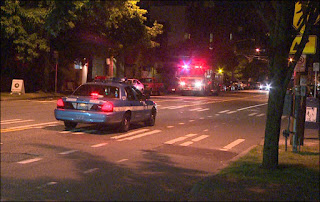 A deacon brother of mine and I helped him up and steadied him for a challenging walk across the street.
As we slowly approached the doorway, he told another person in our group that his sleeping bag was under some nearby bushes. He retrieved it and carefully laid it out for Gary.
As we were about to help him to get onto his open sleeping, Gary started to cry and told us how much he appreciated our assistance.  He asked for a hug from each of us and said “thank you,” with tears streaming down his face. 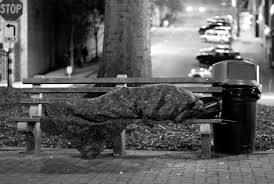 We got him on his sleeping bag, left him a fresh pair of socks, a few bottles of water and two peanut butter and jelly sandwiches, lovingly made by Archbishop Murphy’s volleyball team hours earlier.
We told him to have a good night.  He continued to cry and tell us, “Thank you so much,” as we walked away. 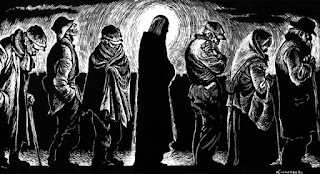 In THAT moment, we ALL felt we had met Christ in one of the “least” of our brothers.
I read a good book recently that captured perfectly what we experience nightly on the street. It’s the same thing our mission team experienced in Guatemala. 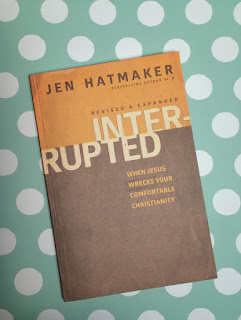 The book is entitled “Interrupted: When Jesus Wrecks Your Comfortable Christianity.”  The author is Jen Hatmaker.
Jen and her husband live in Austin, Texas. Jen’s husband Brandon is a pastor at the local church. Jen is a pastor’s wife and noted Christian author.
She had a life-changing experience with God that turned the family’s life upside down and called them toward an authentic Christianity found in the early Christian Church.
It all started when she had a disturbing thought in prayer:  We are doing NOTHING but blessing the blessed. 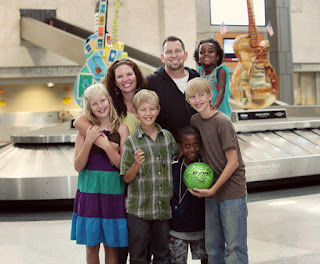 And she realized, “Blessing blessed people eventually leaves us empty.”
God calls us to do more than just bless the blessed. God calls us to take care of the “least of these brothers and sisters” the exact same way Christ did during His ministry.
Here’s how her conversation with God went. 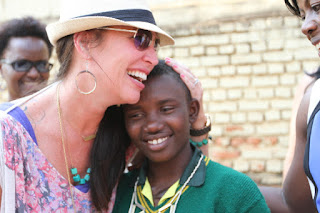 “I told Him, ‘I thought I was feeding Your sheep, but I’ll try harder.’  And from the heights of heaven, this is what I heard: ‘You do feed souls, but twenty-four thousand of My sheep will die today because no one fed their bellies; eighteen thousand of them are My youngest lambs, starving today in a world with plenty of food to go around. If you truly love Me, you will feed My sheep. My people are crumbling and dying and starving, and you’re blessing blessed people and serving the saved.’
As Jen wrestled with God she started to get it.  It’s something my Operation NightWatch members understand. And I think this is what our mission team discovered while we were down in Guatemala among the poorest of the poor.
Hatmaker says,
“So Americans living in excess beyond imagination while the world cries out for intervention is an unbearable tension and utterly misrepresents God’s kingdom. While the richest people in the world pray to get richer, the rest of the world endures unimaginable suffering with their faces pressed to the window of our prosperity ... and we carry on, oblivious. As Gandhi once FAMOUSLY said, “I like your Christ, I do not like your Christians. Your Christians are so unlike your Christ.” 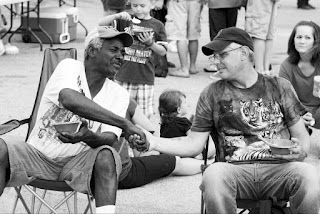 She and her husband started encouraging social justice and forming missionary disciples, calling people to take care of the poorest in their midst in South Austin.
Needless to say, it didn’t go over well -- with some.
She shared the following story,
“A couple recently left our new church, citing our vision to be missional and socially active: (This is what the couple said,) ‘We believe what you’re doing is right, but we’re just not motivated by it. I need my pastor to deal with me.’” 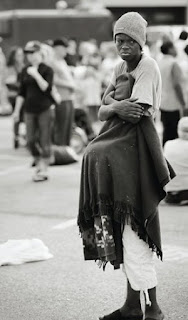 Pope Francis in Evangelii Gaudium (co-written by Pope Benedict) called on all Catholics to embrace Missionary Discipleship. He reminded us early on in his Pontificate that the Catholic Church is a “poor Church for the poor.”  He encourages all Catholics to live a modest lifestyle leaving room financially to help take care of the poor in our world.
Taking care of the “least of these” is our mission whether it’s in Guatemala or the streets of downtown Seattle or right here in Everett.
I am reminded of a moment on the first day we arrived in San Lucas Toliman, Guatemala, and spent time in the parish Church. 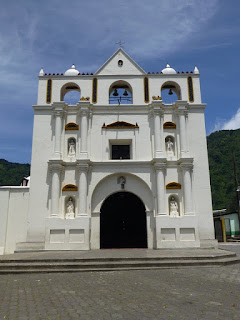 As we sat in the pews of this poor Church built for the poor, we experienced cries of pain and anguish in the people praying in front of the tabernacle with the Blessed Sacrament.
Moans and groans and tears came loudly from the dozen or so poor souls oblivious to the Americans sitting right behind them.
They were pouring out their hearts to God, sharing their challenges to Jesus who hears their cries and brings missionaries far from home to serve their needs.
When I was in the exact same location in January 2013, I saw priests and deacons in our Maryknoll group with tears rolling down their faces as they listened to this quiet anguish.
Last month, as I sat in nearly the same spot in the front pews, I turned to one of our young people.
The look in her eyes said it all, “I had no idea.”
As Jen Hatmaker writes: 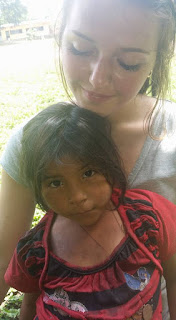 “Is this not why the gospel is such good news for the broken? Jesus redefined the nature of greatness, which has always rung hollow for the least and last. He took its connotation away from power and possessions and bestowed it on the humility of a servant.”
Namely, the suffering servant who we hear about in today’s first reading from Isaiah and in today’s Gospel.
In our second reading from James we hear the convicting words:


“What good is it, my brothers and sisters, if someone says he has faith but does not have works? …


Demonstrate your faith to me without works, and I will demonstrate my faith to you from my works.” 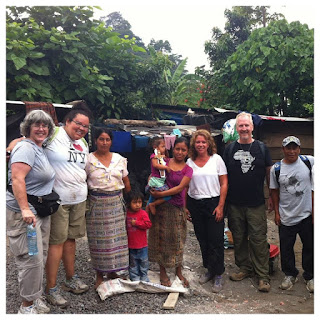 James is telling us it’s not enough to just TALK about taking care of others or praying for the poor, we have to actually do it.  We have to serve their needs.  As Disciples of Christ we must act in imitation of Jesus.
Just believing in Christ and going to Mass every week won’t cut it. We have to draw strength from the Eucharist to do Christ’s mission in the world and here at home.  As a parish, we know this by our support of “good works” in Guatemala.  As well as what we do with St. Vincent de Paul, our food banks, and social action efforts.
Jen Hatmaker said this about taking care of the “least of these” as a missionary disciple: 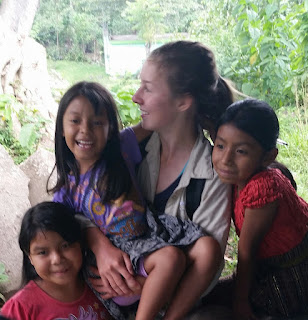 “So as I was beginning to identify with the least—and Jesus already said He was the least—I was perhaps starting to commune with Christ in earnest for the first time in my life. It was a party at the bottom. Sorry I was so late. I got lost.”
The party at the bottom reinforces today’s Gospel message: 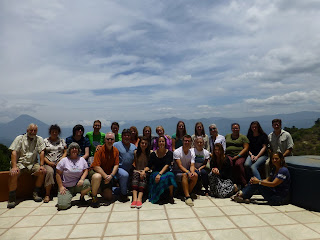 “For whoever wishes to save his life will lose it, but whoever loses his life for my sake and that of the gospel will save it.”
On behalf of all 21 members of our Guatemala Mission Team, we say thank you for your generous support of our missionary disciples. We have a “thank you” card we’ll hand out later at Mass. We did many “good works” during our time in Guatemala.  15-thousand dollars were spent building houses, building stoves, taking care of the poorest of the poor in the beautiful Lake Atitlan area of Guatemala.
We have become a mission parish. I hope to see some of you in two years when we do this again. 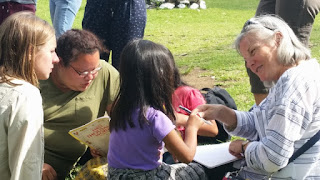 This Wednesday night at 7pm at Hensen Hall, we will bring our mission experience home to our parish. All are invited to hear the Good News. In the coming weeks, I’ll talk more about what we can do as a parish to build on our call to be missionary disciples. 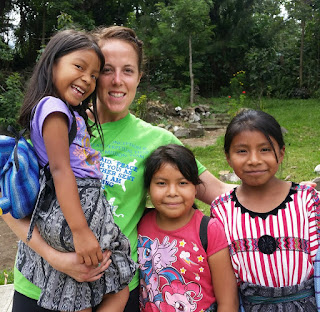 But first we must ask ourselves: Are we just blessing the blessed?  Or are we doing what Christ’s calls each and every one of us to do -- taking care of the poor and marginalized at home and around the world.  When we focus on helping those who can do nothing for us, we are living in harmony with Christ our Savior, doing His “good works” and glorifying His name. And in doing so, we are blessed to see the face of Jesus in the faces of those we serve.
Posted by iServant Media at 2:26 PM No comments:

Here's the homily I would have shared this weekend

Sometimes a single picture can open our blind eyes to a problem.
Powerful images taken by photojournalists over the decades have helped us to see man's inhumanity against man or captured a moment of something so senseless that we scream "something has to be done!"
There is probably one picture of such inhumanity or senselessness seared into your brain.
And this week, the world added another. NPR's Scott Simon eloquently gave voice to our heartbreak at seeing this image. 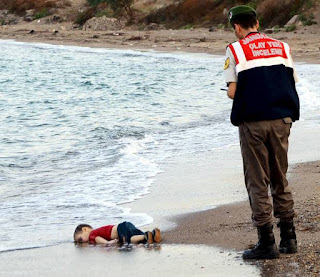 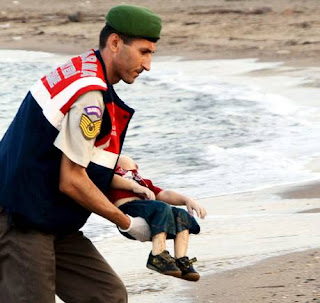 Posted by iServant Media at 11:11 AM No comments: