Keep The Diocese Of Scranton, PA, In Prayers 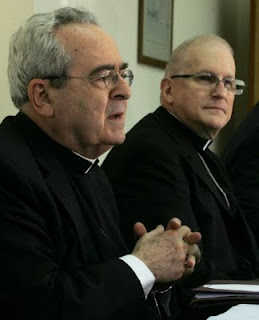 Scranton, Pa., Aug 31, 2009 / 10:32 am (CNA).- At a press conference in Scranton this morning, Bishop Joseph Martino announced that he and auxiliary bishop John Dougherty are stepping down from their posts. Bishop Martino explained that he is resigning because of "crippling physical fatigue," while Bishop Dougherty is retiring upon having reached the age limit.

Last week, CNA reported that Bishop Martino, 63, would be resigning from his post in Scranton. The Vatican announced today that Pope Benedict has accepted the resignation of Martino in accordance with canon 401 § 2 of the Code of Canon Law which says: a diocesan Bishop who, because of illness or some other grave reason, has become unsuited for the fulfillment of his office, is earnestly requested to offer his resignation from office.”

Speaking at a press conference in downtown Scranton on Monday morning, Bishop Martino announced that for some time, “there has not been a clear consensus among the clergy and people of the Diocese of Scranton regarding my pastoral initiatives or my way of governance. This development, he continued, “has caused him great sorrow, resulting in bouts of insomnia and at times a crippling physical fatigue.”

“The Diocese of Scranton needs to continue to respond to the call of our late Holy Father Pope John Paul II, and of his successor Pope Benedict XVI, to engage in the New Evangelization,” he said. “To do so however, the Diocese of Scranton requires a bishop who is at least physically vigorous. I am not that bishop.”

He went on, “therefore, I have asked our Holy Father, Pope Benedict XVI, to accept my resignation as Bishop of Scranton.”

He noted that though he has no immediate plans, he plans to remain in Scranton.

The Diocese of Scranton will not only lose Martino, but also one of its auxiliary bishops, Most Rev. John M. Dougherty, whose resignation was also accepted by the Vatican today. Dougherty, 77, submitted his resignation when he reached the age of 75.

Dougherty was born in Scranton in 1932. The Scranton auxiliary studied at the University of Notre Dame and was ordained a priest in 1957. He was appointed Auxiliary Bishop of Scranton in 1995.

Cardinal Justin Rigali of Philadelphia will oversee the Diocese of Scranton as its apostolic administrator until a replacement is named by the Holy Father.

When he was asked how quickly he would like to see the Pope name a replacement, Cardinal Rigali said he hoped it would be within six months, stressing that this was his hope, not an expectation.