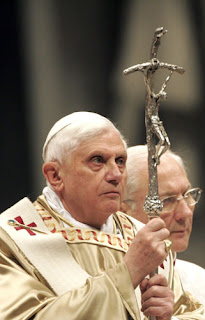 This scandal breaks my heart. I pray our Catholic Church takes this moment in its two thousand year old history to repent for all past sins. I pray Pope Benedict XVI creates a system of transparency and zero-tolerance with regard to all future cases of child or teen sexual abuse. The U.S. Church is leading the way in many respects on this issue. Europe and the rest of the world should follow.

Christ would have no tolerance for abusers, "Whoever causes one of these little ones who believe in me to sin, it would be better for him to have a great millstone hung around his neck and to be drowned in the depths of the sea." Matthew 18:6

Our Church should be no different.

The Vatican and other church officials have amplified their defense of Pope Benedict XVI and his decisions regarding priestly sex abuse, and rejected accusations of a continued cover-up of such crimes.

After a series of reports in the New York Times and other media criticizing the pope for alleged "inaction" on sex abuse cases, Vatican authorities emphasized that it was the pope who, as Cardinal Joseph Ratzinger, pushed for harsher measures against abusers and made it easier for the church to defrock them.

On March 27, the Vatican newspaper, L'Osservatore Romano, ran the full texts of two landmark documents that in 2001 placed the sexual abuse of minors by priests among the most grave sins, and established that allegations be handled by the Congregation for the Doctrine of the Faith, then headed by Cardinal Ratzinger.

The same day, the newspaper ran a front-page commentary by British Archbishop Vincent Nichols of Westminster that had appeared in the Times of London, expressing shame over priestly sex abuse but strongly defending the pope's efforts to curb it.

"What of the role of Pope Benedict? When he was in charge of the Congregation for the Doctrine of the Faith he led important changes made in church law: the inclusion in canon law of Internet offenses against children, the extension of child abuse offenses to include the sexual abuse of all under 18, the case by case waiving of the statute of limitations and the establishment of a fast-track dismissal from the clerical state for offenders," Archbishop Nichols wrote.

"He is not an idle observer. His actions speak as well as his words," he said.

Jesuit Father Federico Lombardi, the Vatican spokesman, said the recent media focus on the sex abuse cases and the way they were dealt with by the hierarchy comes as no surprise.

"The nature of the question is such as to attract the attention of the media, and the way in which the church deals with it is crucial for her moral credibility," he said in a commentary on Vatican Radio.

But Father Lombardi pointed to the "many positive signals" that indicate the church has understood the problem and addressed it. For example, he said, a recent report showed that the number of reported sex abuse cases declined between 33 and 36 percent in U.S. dioceses and religious institutes between 2008 and 2009.

"It must be recognized that the decisive measures currently being implemented are proving effective: the church in the United States is on the right road to renewal," he said.

"This, we feel, is an important piece of news in the context of recent media attacks, which have undoubtedly proved harmful," the spokesman said.

Father Lombardi said impartial observers would recognize that the pope and the doctrinal congregation are continuing to guide bishops and help them "combat and root out the blight of abuse wherever it appears." The pope's strongly worded letter to Irish Catholics earlier this month demonstrated his commitment to "healing, renewal and reparation" in the church, he said.

German Cardinal Walter Kasper, the Vatican's top ecumenical official, said the pope's letter to Irish Catholics was "courageous." It indicated that the church was on an "irreversible" path toward greater transparency and severity in dealing with sex abuse by priests, the cardinal told the newspaper Corriere della Sera March 27.

Pope Benedict has never tried to protect abusers, and the criticism aimed at him is really an attack on the church itself, Cardinal Kasper said.

"He was the first who, even as a cardinal, felt the need for new and stricter rules, which didn't exist before. That some newspapers are now using terrible cases to attack the pope head-on is something that goes beyond every limit of justice and fairness," he said.

Capuchin Father Raniero Cantalamessa, preacher of the papal household, mentioned the sex abuse scandal in his weekly Lenten meditation. In his talk to the pope and Roman Curia officials March 26, Father Cantalamessa said the church and its members are called to purify themselves and, if there is humility, then "the church will end up more resplendent than ever from this war."

"The media's tenacity -- and we have seen it in other cases -- in the long run will bring about the opposite effect that they had hoped for," he added.

Addressing the pope specifically, Father Cantalamessa reminded him that God told Jeremiah that before his detractors he would make him "a solid wall of brass. Though they fight against you, they shall not prevail. For I am with you to deliver and rescue you."

French bishops, assembled at their annual spring meeting, sent a "message of support" to Pope Benedict, saying they were with him "in the difficult period our church is going through."

Italian Archbishop Giuseppe Betori of Florence told Vatican Radio March 26 that the media was manipulating information in order to falsely accuse the pope of inaction on sex abuse. He said he had dealt directly with the doctrinal congregation under Cardinal Ratzinger on abuse allegations, and found that the congregation demonstrated "the maximum attention and the maximum severity."
Posted by iServant Media at 10:11 AM