I love seeing God's handy work in action. What a beautiful, loving example of the Kingdom of God here on earth. Enjoy connecting the dots and seeing the face of God.

Donation: Events bring women together, resulting in the gift of a kidney
Reprinted from the Tacoma News Tribune
KRIS SHERMAN; STAFF WRITER
Published: 05/27/10 12:05 am 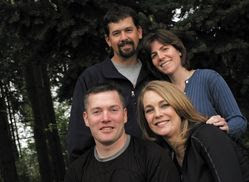 Some would call it a string of fortunate coincidences.

Tammy and Larry Aegerter and Michelle and Mark Braunschweig call it providence.

There was a conversation between airline passengers. A call for help in a church bulletin. A grandmother’s broken hip. An introduction at a party in celebration of menopause.

All led to twin surgical suites at the University of Washington Medical Center, where Michelle Braunschweig gave Tammy Aegerter her left kidney May 5.

Two years ago the women didn’t know each other.

Now they are friends.

But their story differs from those you often hear about people who need transplants and strangers who donate life-sustaining organs.

The Braunschweigs and the Aegerters, both couples deeply religious, believe Michelle’s left kidney was destined for Tammy from the day Michelle was conceived.

The surgeons who implanted the kidney told Larry the organ was a perfect fit, that everything “was right there.”

Before Tammy was out of surgery, her new kidney began cleansing her blood.

“I’ve never heard so many doctors excited about seeing urine,” she said.

God’s hand brought them together, uniting two families in the process, they say.

“We don’t use the word ‘coincidence,’ ” Mark said.

February 2007: Tammy is listed on UNOS, the United Network for Organ Sharing, as a transplant candidate.

Sept. 7, 2007: Joe Ferong, stepfather of Larry, sits next to Len Bundy on an Alaska Airlines flight from Seattle to Oakland. Bundy, an associate pastor at The Summit church in Enumclaw, would later invite Ferong, a staunch Catholic, to come and worship. Ferong ultimately visits and joins the church.

April 2008: A notice is placed in The Summit’s church bulletin about Tammy Aegerter’s need for a kidney. Michelle Braunschweig sees it and begins thinking about a possible donation.

Nov. 3, 2008: Larry and Tammy Aegerter, in their roles as volunteer firefighters, answer a call at the home of Mark’s parents, Joe and Sherry Braunschweig. Mark’s grandmother, Anna Osthus, who’s in her 80s, had broken her hip. A few days later, Larry and Tammy stop by St. Francis Hospital in Federal Way to see how Osthus is doing. They briefly meet Mark.

Dec. 22, 2008: Larry’s mom, Terri Ferong, throws a celebration of menopause party. Among the guests is Michelle Braunschweig, who is introduced to Tammy. Tammy doesn’t know Michelle is a potential donor; Michelle meets a warm person she thinks she’d like to help.

July 7, 2009: Michelle begins the process of becoming a donor for Tammy.

October 2009: Tammy begins dialysis, her body no longer able to filter her blood. The treatments leave her nauseated, vomiting and exhausted.

Feb. 5, 2010: After months of testing and blood matching, doctors pronounce Michelle a healthy and fit donor for Tammy.

May 5, 2010: Tammy receives Michelle’s left kidney in a six-hour procedure at University of Washington Medical Center.

THE POWER OF GIVING

The Aegerters and the Braunschweigs discovered along the way they have much in common. Both couples are active in their respective churches – for the Aegerters, it’s Family Life Christian Center in Federal Way; for the Braunschweigs, it’s The Summit, an Evangelical Free church in Enumclaw.

Tammy and Michelle are homeschoolers, teaching core values to their children along with other subjects. Both couples believe in the power of giving, offering comfort and aid.

The Aegerters are volunteers for Pierce County Fire District 13, Browns Point-Dash Point; each has an emergency medical technician certification.

Both got their starts in EMT classes McCollum taught. Larry is a firefighter and medical responder; Tammy’s heart aches to learn and perform the more rigorous firefighting duties, but her weakened body holds her back, McCollum said. So she rides out on EMS calls and helps with CPR classes.

Larry has served in the Army, the Air Force and the National Guard, his record totaling about 15 years. He’s currently an active-duty reservist in the 446th Airlift Wing at Joint Base Lewis-McChord, where he teaches survival skills.

The Braunschweigs have one daughter, Kacy, 18. Mark owns a commercial window business. The couple is active in church work: he, in men’s ministry and leadership; she, in the youth program.

Though many people told Michelle they couldn’t imagine giving up a vital organ, she knew she was called to the task. “God just kind of laid it on my heart,” she said.

“I couldn’t imagine – knowing that I have what she needs to save her life – and looking into Tammy’s eyes and saying, ‘No, I can’t do that,’” Michelle said.

She worried initially about the effect an organ donation might have on her family’s finances and her health, but both fears were quickly allayed.

She was healthy enough for the rigorous surgery and could live with one kidney, doctors said. Costs were covered by Tammy’s and Larry’s insurance plans and by a donor program.

THE NEED IS GREAT

The message Michelle wants people to take away from this story is that organ donation might be inconvenient, but the rewards are well worth the short-term pain.

“And at a minimum, list organ donor on your driver’s license,” her husband, Mark, said.

Tammy and Michelle both have O-positive blood. Though not all of the chemistry fit perfectly, there were enough crucial components to make a match.

Most people believe your donor must be a close relative, but with advances in immunosuppresants, that’s no longer necessary, said Dr. Leanna Tyshler of the Northwest Kidney Centers.

The need is great, and kidneys are in highest demand.

About 107,000 patients are awaiting organ transplants in the U.S. according to the United Network for Organ Sharing. Nearly 85,000, or about 79 percent, need kidneys. Seattle medical centers – University of Washington, Virginia Mason and Swedish – perform about 240 adult transplants annually, Tyshler said.

A transplant, Mark Braunschweig said, is a wonder to behold.

“I probably cried more on Wednesday (the day of the surgery) than I have in 20 years,” he added.

“Every bit of good news that we received (from the operating rooms) was just an opportunity to rejoice.”

HELP FOR FAMILY IN NEED

Firefighters at Fire District 13 “passed the boot” to collect money for the Aegerters, McCollum said. The Browns Point Diner helped with a spaghetti feed. Though insurance will cover many bills, there are still expenses.

While Tammy was in the hospital, Larry thought he’d surprise her with a bit of remodeling and install a new bathtub. He found a dead rat and four anthills beneath the tub, plus mold and dry rot that ran into the kitchen.

Now an unexpected remodel is under way; doctors banned Tammy and her fragile immune system from the house until two weeks after the work is complete. The family is staying in the home of an aunt who recently died.

Last week, the men of their two churches started remodeling parts of the Aegerters’ 1,200-square-foot house. Their work is just a small part of God’s larger construction project, the families say.

“When you can step back and see all the interweaving, the interconnectedness” that led to Tammy’s transplant, you know a divine hand was building it all, Mark said.