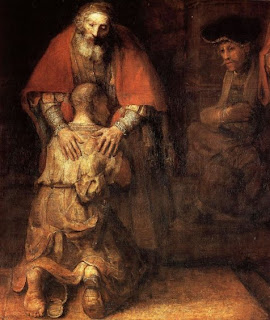 One of the professors in deacon formation asked us to give voice to the mother in the Prodigal Son story in Luke's Gospel. Jesus uses this story to hold a mirror up to the Pharisees and scribes of his era.

Many have written that the father in the story is representative of God. Others say Jesus. For the purpose of this story, I purposely chose to have the mother be representative of Jesus Christ as a way of helping the Pharisees and scribes of our time better hear the Gospel message and see their image reflected in the actions of the older brother.

Then Jesus looked directly to the Pharisees and scribes and said; “Now the mother was watching all these things. Her heart ached when her youngest left home with his inheritance. She told him, ‘Son, you will always be welcome back in this home. My love for you is great and I wish blessings upon your journey. Peace be with you.’ 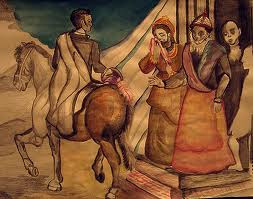 Her older son overheard the conversation and chastised his mother for telling his younger brother he can return whenever he wishes. ‘Father would never welcome him back in this house again.’ But the mother said, ‘loyal son of mine, I love your devotion. But harden not your heart toward your brother. For he is lost and needs to find his way home again. Forgive him. Love him. And pray he returns someday.” But he stormed away in anger.

The father heard what the mother said to the older son and approached her. They gave a knowing look to one another and both heaved a heavy sigh. For how long would it be until the younger son returned? Would he ever come home or would they never hear from him again? The pain of not knowing was almost unbearable, but life goes on. 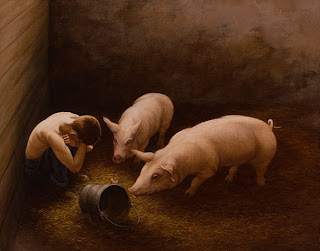 After years and years of worry, the mother had tears in her eyes as she saw her husband run off to greet the figure growing on the distant horizon. For her heart knew her youngest child had returned home for good. The family was restored. Her heart sang.

She was the first to tend with loving care to her son’s painful blisters on his feet and give him water from the small jug she carried hurriedly out to him. ‘Blessed be the Lord, for He has returned our son home to us,’ she cried as she served him. ‘Forgive me, mother,’ he said to her in a quiet whisper. ‘You are forgiven, my son.’ 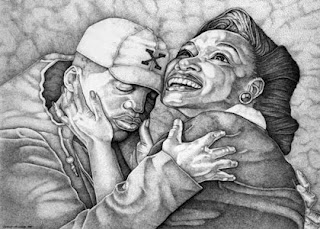 Later as she was preparing the fatted calf for supper, her older son came to her in the kitchen to grumble about his conversation with his father. ‘Is this house mad? Father is acting like a man possessed. Mother, it is not fair that my brother be treated like royalty after squandering all father gave him on a life of debauchery. I will not stand for this!’

His mother said in reply, ‘my love for you is no different than my love for your brother. He has asked for our forgiveness. Remember son; this is the home of your mother and father. It is not your home yet. But I do love your passion. You should tell your brother how you feel, but do so with love and compassion and don’t be self-righteous. I pray you will find it in your heart to forgive him, too. For he loves you very much and it is your example of being a faithful son he will follow from now on. So, be a good and loving example as your father and I have set for you both.’ But the older brother stormed away in anger.

Once again, his mother had offered wisdom that he would wrestle with for days before finally talking to his brother and reconciling their relationship.” 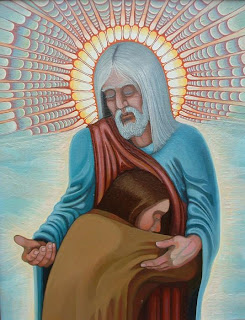 Posted by iServant Media at 9:14 AM