I am always humbled and in awe to see God's creation in abundance.

Remember how amazed you were when you first saw pictures from the Hubble Telescope. Seeing an up-close and personal view of our universe like that is almost like looking into God's eyes.

Here is a picture of our ENTIRE universe from Planet Earth's perspective. It is not the creation of Hubble, but a Seattle photographer. 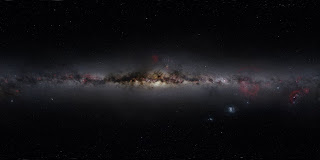 Now here's a story behind the creation of this incredible photograph:
(from komonews.com - Click on above title "Looking Into God's Eyes" to see the video story)

SEATTLE -- It's been the dream of a Seattle-area man to put the entire universe into one photo.

"And show them what's really hidden out there that we can't see, especially in Seattle," said Nick Risinger. "Maybe on a good night, we see 20 or 30 stars. At full size, you see 20 or 30 million."

Risinger spent a year toting his huge camera with six lenses across the world.

"All throughout the Southwest U.S. and twice to South Africa, so there was 60,000 miles total," Risinger said.

The lenses sit on a special robotic mount.

"The Earth spins, the stars don't stay, so you have to track with them," Risinger said.

To capture billions of stars, it takes some pretty impressive numbers. The photo isn't just one click -- it's made up of 37 ,000 photos and has a resolution of 5000 megapixels.

To get the rich colors, his shutters had to stay open for seven minutes.

"As anybody has shot with their point-and-shoot would know, stars are almost impossible to capture," he said. "It was a lot of, you know, sitting out in the cold out under the stars waiting."

After that, it took months to piece together the thousands of pictures into the largest true-color sky survey. He hopes his breathtaking image will get more young people looking up.

"If I was a kid and I saw this, I would go 'Wow, it's really inspirational,' " Risinger said.

You can see the photo and even interact and zoom in on particular stars at his website, www.skysurvey.org.