Every day, we should ask ourselves, “Am I a bridge to Jesus?  Or am I a barrier to Christ?”


Discipleship can be a tricky thing.

If we pay close attention to what Jesus is showing us here in today’s Gospel we see two kinds of disciples in the story of the blind beggar Bartimaeus.


One kind of disciple rebukes the poor, tells them to keep silent and ignores their needs.  The other kind of disciple notices Christ’s heart for the poor and marginalized and says, “Take courage. Rise up.” and brings the poor to Jesus.

One is a barrier.  One is a bridge.   I wonder if the bridge and the barrier is the same person?


What Jesus is demonstrating is that we can choose to be a bridge or a barrier.  In this case, it’s a choice about how we look at the poor and marginalized.


In this Gospel reading it is Bartimaeus’ blindness being cured by Jesus.  But indirectly Jesus is also curing the blindness of His disciples, and all of us, to this fact.  Sometimes only Jesus can open our eyes to the big picture.


You see I used to be a barrier to Christ in my thoughts and in my actions.


I used to shake my head at street beggars.  I used to think and say, “Why can’t they just get a job?”  I used to scoff at my wife for giving spare change to the homeless and say, “Why waste our money on those people?” I’m pretty sure I even rebuked a panhandler or two in my day.


Five years ago, I first volunteered to take part in the Homeless Count in Seattle.  As we walked the downtown streets on a cold January morning we counted many homeless, but one person was more than a number.  We saw a man in his late 20s or early 30s.  He was clearly a veteran of Iraq or Afghanistan due to the markings on his duffle bag and other gear, and the neat and orderly way his belongings were stacked next to his sleeping bag.


He was sleeping on the cold, hard pavement near the ferry terminal in downtown Seattle.  The temperature that morning was in the upper teens. 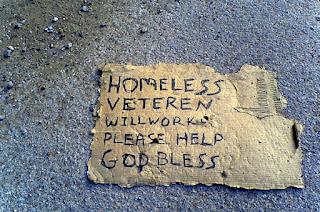 I’ll never forget this man.  His plight opened my eyes to a dirty little secret about homelessness in America.  Sadly, one in four homeless men is a veteran.  This number is growing larger by the year.  These former soldiers put their lives on the line for their country only to come home to no jobs and no hope, broken and abandoned.


Sometimes we look, but we don’t see.


It is Christ who opens our eyes to injustice in society and shows us how we – ourselves – can choose to be a barrier or a bridge between Him and the poor.


I want to share with you a shameful statistic that came to light a few weeks ago.  Perhaps you saw the story on the news.


Washington is the worst state in the nation to be poor.  Our state has the highest taxation of any state in the U.S. for the poorest 20-percent of our population.


The statistic comes from a recent report by the Institute on Taxation and Economic Policy.


Here are the cold, hard facts:

In 2011, the poorest 20% of Washingtonians with an average income of just $11,000 paid 17.3% of their income in state and local taxes.  The closest runner-up is Florida where the poorest paid at an average of 13.5%.  The average poor pay between 8-and-10-percent nationally.   In Washington, they pay nearly double that.

What's wrong with this picture?


In our parish and our community today are many people living at or below the poverty line.  Thanks to this lousy economy, high unemployment and an unfair tax system, many elderly and poor are barely able to keep their noses above the waters of economic ruin. 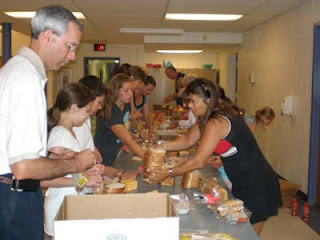 These are the poor Jesus is pointing to today. We are called to hear their cries.


There’s a person in our parish who serves as a bridge and not a barrier between Jesus and the poor.  She humbly brings people to Jesus by her actions every day.


Recently, she was filling-in answering phones at the parish office when she got a call about a broken elevator at an apartment complex housing many poor in Everett.  Many residents were unable to get up and down the stairs to buy groceries.


This person organized a group of parishioners to help and called the operator of the housing unit to ask for a solution.  Her pressure helped bring about action by the landlords.  I encourage you to see today’s bulletin for the full story.
http://iservantmedia.blogspot.com/2012/10/good-works.html


I draw my inspiration from people like Carlene Nelson as I begin my service as a deacon in this parish.

One of my deacon heroes is St. Lawrence of Rome.  He was a deacon who served the poor and marginalized of ancient Rome in the early Christian church.  He also was charged with being the “keeper of the treasures of the Church” during the reign of Pope Sixtus the Second.


He lived at a time when the Christian Church was being persecuted and martyrdom was commonplace.

When the Pope and four deacons were arrested and executed, Lawrence was released to go gather the “treasures of the church” to hand them over to Rome.  He told Roman authorities it would take him a couple of days to gather what they asked for.


When a couple days had passed, Roman soldiers and the Prefect arrived at the Church and ordered Lawrence to surrender the promised “treasures.”  He granted their request by showing them the poor, the sick, the street beggars of Rome and said, “Here are the treasures of the church.”


St. Lawrence got what Jesus is showing us in today’s Gospel.  The blind beggar Bartimaeus is a “treasure of the church.” He had faith enough to see this reality of Jesus.


In fact, in many ways, scholars say Mark uses the Bartimaeus story to reverse the story of the rich man who could not become a disciple of Jesus because he was too tied to his many possessions.  We heard that story a few weeks back.  It’s a reading that troubles a lot of people.


The street beggar Bartimaeus has no possessions except his cloak, and without a moment's hesitation he casts aside his ONLY possession to follow the Son of David. 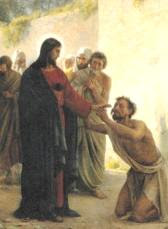 Bartimaeus' cry for compassionate help from Jesus should be the same cry we hear from the poor echoing in our hearts today.


Jesus asks us to cast aside our preconceived notions of rich and poor when we follow Him and do our part to be His heart, His hands, His voice.


Our faith in our High Priest Jesus Christ should open ALL our eyes to what's wrong with the present world and inspire us not just to sit idly by and watch, but stand up, speak up, and act. Only then do we follow Christ's example.


Nobody said it was easy being a disciple of Christ.  Just ask St. Lawrence.  He was executed for his actions.


But when we help the poor to rise up and take courage, when we bring them to Jesus by our words and by our actions, we no longer are barriers to Christ.  We become bridges to the Kingdom of God.
------