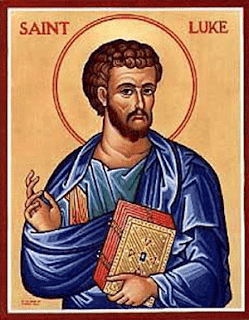 I love that we get to peer inside the strange and wonderful world of the Luke the Evangelist this year.  This is the Year of Luke in our Catholic lectionary.


A unique characteristic and central theme of Luke’s Gospel is Jesus’ ministry to the oppressed and those excluded from society.


Isn’t that the point of what he tells the people in the synagogue in today’s reading?


In Luke’s Gospel, Jesus is always lifting up oppressed groups (the poor, the captives, the blind, the lame, the deaf, lepers, Samaritans, prostitutes, tax collectors).  The reviled in society.  “Those people.”


Another one of Luke’s Gospel themes is salvation is for everyone.   From the very beginning of the Gospel, Gentiles are included in Jesus’ plan to save the world.   Not just the Jews. 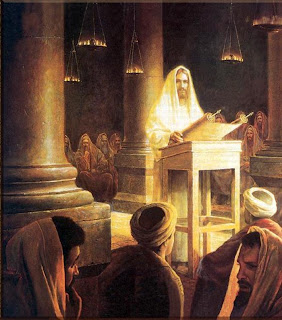 We have much to be thankful to Luke’s Gospel for opening the door for all of us to enter the Body of Christ.


It’s also interesting to note something in the beginning of today’s Gospel reading.


The very opening to Luke’s Gospel refers to “most excellent Theophilus” in launching the story of Christ.


For years, scholars thought Theophilus was some wealthy benefactor who paid for Luke’s Gospel.


Many scholars now challenge that thinking by pointing to Mary’s Magnificat in Luke’s Gospel where Mary says,”He has thrown down the rulers from their thrones but lifted up the lowly. The hungry he has filled with good things; the rich he has sent away empty.” 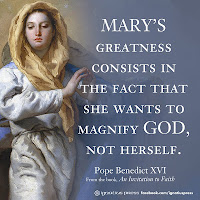 Eliminating the cultural divide between rich and poor is such a strong message in Luke.


The name Theophilus actually translates from Greek to mean “all the friends of God.”


Perhaps Luke was using a literary technique to get everyone’s attention and show we are all friends of God equal to one another.


Many scholars say Luke was trying to bridge the gap between Israelites, followers of Jesus and the Romans with his writings in both the Gospel of Luke and Acts of the Apostles.


A bridge-builder perhaps.  But his words at times were designed to provoke, make people mad, get people riled up.  Or at least get people to look deep inside their hearts and see a reality that is far beyond their own prejudices. 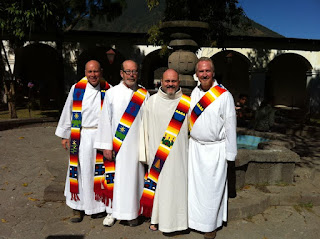 Luke and St. Paul are both showing us a radical equality in their scripture messages today.  Not everybody likes that idea.


On Friday evening, I returned from a two-week Maryknoll trip with priests and brother deacons, to see the sites of the Catholic martyrs in Guatemala and El Salvador.  The Stoll I’m wearing was given to me by the Tzutuhill Mayan people for serving at their Mass last Sunday in Santiago Atitlan, Guatemala. 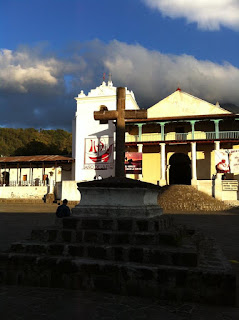 I used to see Catholics promoting social justice in Central America as “Socialists” or maybe even “Communists.”  I used to ridicule “those people” for their actions.


One thing as Catholics we are all called to do is look at the world through the eyes of Christ by using the lens of the Gospels.


The Gospel that always speaks the loudest to me is Luke -- because it challenges me not to buy into my own human thinking, but to buy into the divine thinking of our Lord and savior Jesus Christ.


Archbishop Oscar Romero was feared by the liberal left when he was appointed Archbishop in El Salvador.  He was considered too conservative.  He would maintain the status quo power of rich families of El Salvador.  He would refuse to rock the boat on dangerous waters where the divide between rich and poor was far greater than here in the United States.  Far more deadly. 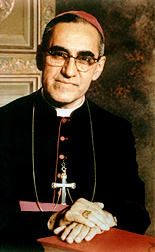 But after opening his eyes to the plight of the poorest of the poor in his country, and especially after the assassination of a close priest friend Rotilio Grande who fought for the poor and was the first priest assassinated before the Civil War started, Archbishop Romero became a hero to the poor, his “most excellent friends of God.”


For doing this, Archbishop Romero was accused of being a “Communist” by the military Junta running El Salvador and became a target.


One day, while serving Mass in San Salvador, a military sharpshooter put a bullet into the heart of Archbishop Oscar Romero through the open doorway of a hospital chapel steps from his rectory home. 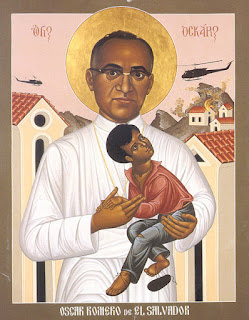 Romero had just finished his homily and was preparing the altar for the Eucharistic sacrifice when he became the sacrifice at that altar.


One day earlier, in his Sunday homily, he called on Salvadoran soldiers, as Christians, to obey God’s higher order -- to stop carrying out the government’s efforts to repress the people, to stop terrorizing them with murder and torture, to stop violating their basic human rights.


Archbishop Romero’s only real crime:  he believed deeply in Luke’s gospel.  He bought into Mary’s Magnificat.  He shared the Good News to the oppressed, the captives, the poor.


He lived the life of Jesus Christ. 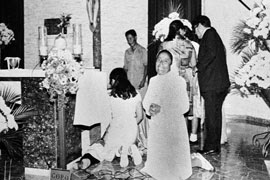 In a Civil War that lasted 12 years, 1 Archbishop, 19 priests, 4 religious women were assassinated in El Salvador.


75-thousand of the poor peasants, “those people,” were killed and 5-thousand went missing.


I’ve asked God for forgiveness for uttering the words “those people” in the past while praying over the graves of Archbishop Oscar Romero and others. I actually stood on the exact spot where Romero died while I was serving at Mass 10-days ago.


That’s a phrase we hear far too often in our own society today: “Those people.”


It’s a phrase that should be forever banished from our vocabulary if we truly are followers of Christ.


“Those people” is code for a stereotype that is about to be conveyed by the speaker of the words, “Those people.”


“Those people” are usually those considered “below” or unequal to the speaker.


I know.  I’ve uttered those words way too often in my lifetime. 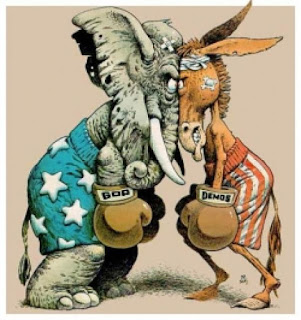 I hear “those people” from friends on one side or the other of the political divide when commenting on the behaviors or beliefs of those on the opposite side of the divide.


I might hear my conservative friends talk down about “those people” when referring to liberal thinkers in our community.


­Or hear my liberal friends talk down about “those people” when referring to conservative thinkers in our community.


Sadly, this division and this strife are tearing apart our nation.


“Those people” many times refer to the poor and marginalized in our human societies.  The people Luke’s Gospel raises up.


I have heard some in our own parish community use the words, “those people” to refer to the occasional street people who come join us at this Mass weekly, parishioners who roll their eyes when they see them take seats at our Eucharistic celebration. 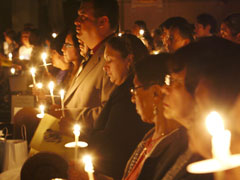 In our English-speaking culture in Everett, Washington, “those people” usually targets cultural minorities.


But I also hear the words “those people” in a Hispanic community just as divided -- usually by the land of their national birth.


When I hear these words, it makes me sad and mad.


To God we are all one human family.  Being “those people” is a human concept.  Not a divine concept. 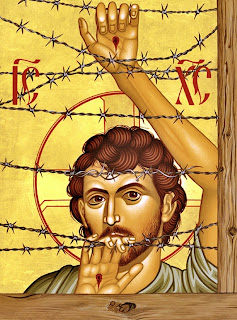 As Disciples of Christ we are called to be better than that.


As Disciples of Christ we are called to raise up, not put down our sisters and brothers no matter our differences.


As Disciples of Christ we are called to promote the human dignity of all just as Christ did during his earthly ministry.


As St. Paul makes abundantly clear in today’s second reading from Corinthians, “we are many parts, but we are all one body” to paraphrase the passage by using a popular hymn.


We may not see eye to eye with each other, we may not understand our cultural differences; we may not be able to look beyond our own private prejudices.


But Christ calls us to do just that.


Maybe these words are provoking to you.  Perhaps you’re thinking, “Who is he to be saying such things?   In many ways, I would agree.


I’m not casting the first stone, because I myself am not without sin.


But my “most Excellent friends of God,” I feel deeply called by Jesus Christ to share this important message today and challenge our human thinking.  To raise our thinking and speaking to a divine level. 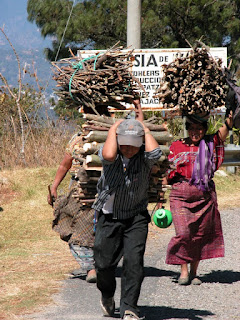 I heard a beautiful quote by Catholic spiritualist Thomas Merton while on my trip to Central America.  It was shared by an 82-year-old Maryknoll Brother named Marty Shea who has spent most of his life serving the Mayan people in the remote jungles of Guatemala.


They are “those people” in Guatemala and in the years of civil unrest 250-thousand were slaughtered and 50-thousand “disappeared” in a government-backed genocide.  In other words, 300-thousand of “those people” were systematically eliminated. 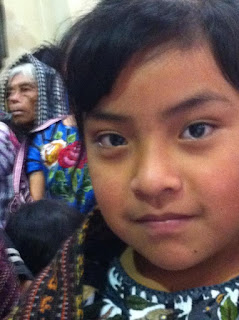 Please let us commit to banish from our mouths the words:  “Those people.”  Let’s commit ourselves as a parish community to never speak those words again.


Let’s replace them with better words, living words, words that promote dignity and respect and call others to join us as followers of Christ.


Let’s replace the words “those people” with the words “My most excellent friends of God.”


For in doing so, we will do our part to bring about the Kingdom of God here on earth.
Posted by iServant Media at 3:54 PM