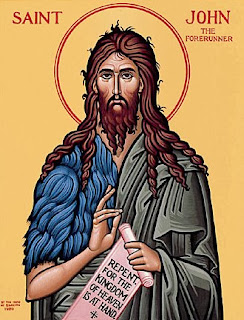 If John the Baptist roamed the earth today, would we recognize him?   Would we even see him?  Or would we be blind to his presence?


A man who wandered the world in tattered rags.


A man who ate stuff no one else would eat.


A man with no home.


Don’t we see people like this every day on the streets of Everett?


Our cynical minds, shaped by an uncaring culture, sometimes lead us to turn a blind eye to their daily struggle.  But they are there!


And we ignore them at our own peril.


John the Baptist was calling on Israel to turn away from their personal and social sinfulness, cleanse themselves and prepare for the Messiah.

John the Baptist was a prophet.  James Watkins is a modern day prophet.


He’s an advocate for the homeless in downtown Seattle and recently took on a local TV station for its portrayal of the homeless.  The report called them a violent “underbelly,” “dangerous criminals and drug addled garbage.”


I’d like to read you some of what he‘s heralding us all to hear: 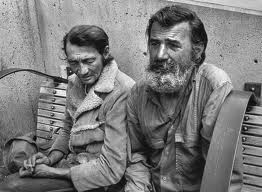 “Could it be a surprise to you that our residents already perceive themselves as worthless and see our situation as hopeless? Can you perceive how your approach to our story reinforces trauma and further damages self-perception? Can you understand that it drives the wedge of division between ‘us’ and ‘them’ even deeper, making it even harder for my friends to believe that they deserve help, hope, and redemption to the community?”


James Watkins goes on to say: 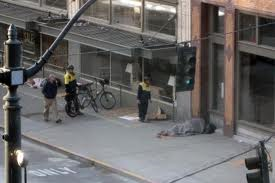 “there ARE predators who come to the neighborhood to find easy prey amongst our clients. They exploit them financially, physically, emotionally, and sexually, targeting them for their chemical dependency, their hunger, their emotional need, and their despair. The average citizen walking the streets has little to fear from (homeless people).”
Watkin’s attack on my colleagues in the broadcasting industry is sharp.  And we should all take heed of his point here: 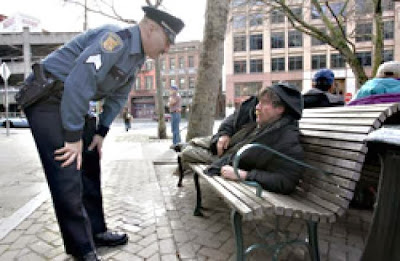 “(The TV report) The “Most Dangerous Block in Seattle” is the result of a culture-wide practice of socially isolating economically disadvantaged people who struggle with various combinations of mental illness, physical and developmental disabilities, terminal disease, and chemical dependency; then ghettoizing them through incarceration or institutionalization into an environment of desperation, and subsequently failing to provide adequate resources for treatment, education, health care and emotional counseling. And finally with reports like this, stigmatizing them through sensationalist reporting and misrepresentation making reintegration into the larger society even more difficult if not impossible.”


As I said before, I’ve found John the Baptist right here in the Pacific Northwest.  And he’s pointing us all to the same people the Messiah Jesus is pointing us to.


Sometimes we become indifferent, complacent and too immersed in our daily routine.  During advent, John the Baptist helps to shake us out of our indifference and complacency and see a deeper reality -- the world the way God wants us to see it. 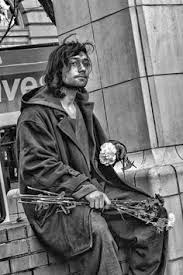 With this beautiful line, James Watkins does the same:


“They are not monsters, nor leeches. They are desperate people, suffering from real diseases, biological, social, and spiritual. Offer them your hope, not your contempt. They have already had plenty of that.”

Why does Jesus ring so true in the hearts of all?  Why are so many people right now fascinated with Pope Francis?
Even non-believers marvel at Pope Francis so beautifully living out Christ to the world.  His actions are drawing people closer to the Kingdom of Heaven.


Pope Francis is standing with the homeless just as Jesus stood with the homeless in His day.  In fact, news reports say the Pope is leaving the Vatican every night to give alms to the poor in the streets of Rome.


Recently, he blessed a statue of a homeless Jesus.  The statue, created by a Canadian sculptor, was itself homeless after the Catholic Church it was created for rejected it, turning it away. 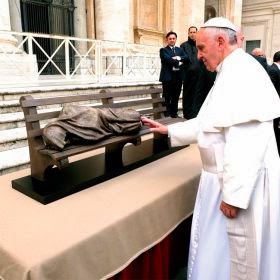 The devout Catholic sculptor wanted to make a Jesus that the poor and outcast could relate to.  In this sculpture, Jesus lies on a park bench.  His feet and hands are hidden under a wool blanket.  The only evidence it’s Jesus are in his pierced feet.


The sculpture has found a home at the Vatican.


I think the reason Jesus and Pope Francis ring so true in our world today is because the Law of Love is written in the hearts of all humanity, no matter the faith tradition or lack thereof.


The commands of the Law of Love are that we pay attention to the people Jesus paid attention to during his ministry:  the poor, the marginalized, the outcast, the stranger.


When we do, people take notice.  People are inspired to do the same thing.  People rejoice.   After all, Jesus was homeless during his three-year ministry. 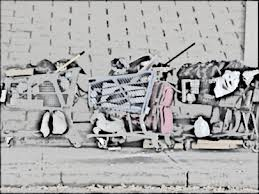 Our parish is preparing for a special event.


For the second year, we are holding Operation Stocking Stuffer for the homeless men and women of Everett.


You’ll find a flyer in today’s bulletin listing all the items we need.  Large baskets are in the vestibule to collect these items.


Then on Christmas Eve morning, we will gather at Henson Hall to put these items in “Stockings” and give them to the men and women living on the streets or in shelters here in our own community.


I encourage you and your family to join us.  We had nearly 60 people join us last year and many families still talk about the experience especially those who helped deliver the stockings to the homeless directly.


In today’s second reading to the Romans, St. Paul is encouraging us “to think in harmony with one another, in keeping with Christ Jesus.”


We may not always see eye-to-eye on everything in our faith, but this is one thing our Catholic Social Teaching helps us to understand as important:  taking care of the poor.

In his recent exhortation Evangelii Gaudium, Pope Francis said the Catholic Church is “a Church that is poor and for the poor,” reminding us the poor have much to teach us.


Pope Francis wants us all to better understand what it means to be God’s people and be disciples of the way, the truth, the life    Jesus is revealing to us in His person and what he continues to call us to be every day as we build up the Kingdom of Heaven here on earth.


One Catholic observer said the Pope is “trying to ‘revitalize’ the Church’s option for the poor … and is (reawakening) people’s consciences.”  That’s exactly what John the Baptist is doing in the Gospel today.


As we heard in today’s first reading from Isaiah, Jesus the Messiah defends the “poor” and “afflicted” and will deal justly with the “wicked.” 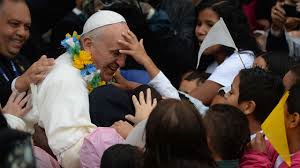 Jesus will not rule with an iron first, bringing God’s judgment upon us all.  He will rule in such a way as to bring hope to the whole world, something sorely lacking in His day and today.


John the Baptist is waking us up to this reality as we continue our Advent journey.  So is James Watkins.


I pray we hear “a voice of one crying out” in our despairing world, “prepare the way of the Lord” and heed His call.

Posted by iServant Media at 8:57 PM