Today, Jesus is performing a miracle. 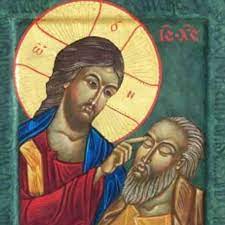 In Mark's Gospel, Jesus uses the Aramaic word "Ephphatha" when curing a deaf man. We are told the word means, "be opened." Scholars say it also means "be released."

In less than a week, we commemorate the 20th Anniversary of one of the most traumatic days in U.S. history: 9/11.

National Geographic has a new documentary about that terrible day (9/11: One Day in America). It takes us back to the pain and trauma we all felt on September 11th, 2001, using eyewitness accounts from the many survivors. 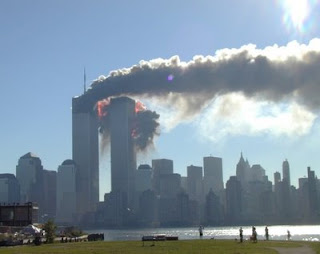 But in the midst of the horror, miracles did happen on 9/11.

Jesus worked through self-sacrificing FDNY, NYPD and Port Authority Police rescuers and others who evacuated thousands of people from the Twin Towers before perishing themselves in the collapse.

But not all were lost.

In our first reading from Isaiah, we hear the words, “Thus says the Lord: Say to those whose hearts are frightened: Be strong. Fear not!” 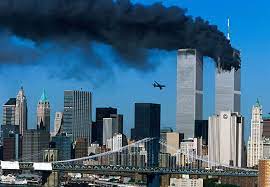 Many heard the voice of God that day – men and women who rushed in while others were rushing out of the burning buildings.

Port Authority Sergeant John McLoughlin and officer Will Jimeno heard that voice, too. They were just entering the concourse between the two towers when Tower One collapsed trapping them in the rubble of a stairwell.

Miraculously McLoughlin and Jimeno were alive under tons of twisted metal and concrete debris.

Jimeno’s legs were pinned under a heavy piece of concrete and rebar. McLoughlin was crushed under a large piece of the  debris.

As Jimeno lay in the silence for hours, he had only thought: “I’m going to die.”

So, he made a sign with his hands, sign language for “I love you” something he used often with his wife and four-year-old daughter. He knew if he was found this way, his pregnant wife and daughter would know his last thought on earth was to send them a sign of his love.

Retired Marine David Karnes also heard God’s voice telling him to, “Be strong. Fear not!” that day. Karnes was a senior accountant working at Deloitte Touche in Connecticut on September 11th, 2001.

When the second plane hit the World Trade Center, Karnes looked at his boss and said, “We’re at war.” He was not deaf to what was happening.

David had spent over 20 years in the Marine Corps and felt it was his duty to help out that day.

David grabbed one of his old uniforms kept hanging neatly pressed in a home closet and gathered all his infantry gear (including ropes and repelling implements) from a storage unit before heading to New York City. 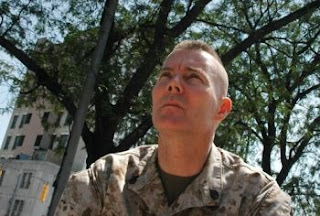 Karnes also stopped by his church and met with his pastor, telling him he felt called by God to go to Ground Zero. They prayed together that he would be led to survivors.

Once he got to New York City he tried to talk others at the command center into venturing to the center of the destruction to search for survivors. Most said it was too late. There was only one taker in the crowd. A fellow Marine.

For hours, former Marine Staff Sergeant David Karnes and former Marine Sergeant Jason Thomas searched through the rubble looking for signs of life, walking through ragged, unstable, and dangerous wreckage of the collapsed 100-story Twin Towers, through fire and smoke and shifting debris. It was so hot their boots were melting into the rebar.

Karnes and Thomas kept screaming, “United States Marines.  If you can hear my voice yell or tap.”  This went on for hours. 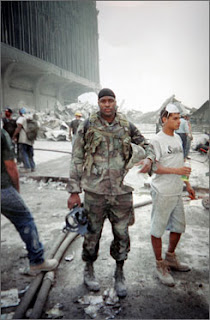 Eventually, they heard something.  As they stood quietly, a weak voice emerged from the wreckage, “We’re over here.”

After seeing the men trapped under tons of concrete and steel, 50 feet below from where their rescuers stood, Karnes pulled out his cell phone to call his wife in Connecticut and sister in Pennsylvania to ask them to contact authorities.  Have them send rescue workers immediately to the center of the South Tower wreckage.

Help would finally arrive. First on the scene was a recovering drug addict and former paramedic who heard a voice calling him to Ground Zero that day.

Chuck Sereika was struggling with his recovery. He felt lost and all alone but gathered enough strength to head down to the scene of the carnage to see if he could help. 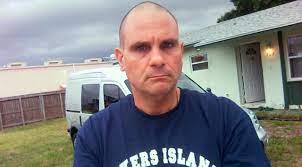 He was the first to arrive where the two Marines had found the pair of survivors: Sgt. McLoughlin and officer Jimeno.

Sereika said he was terrified. But found the courage to crawl down the hole where the two men were trapped. As he reflects on the experience now, he says God used the weak to humble the strong, almost the exact point of today's second reading from St. James.

Hours would pass before both men were pulled safely from the ruble.

The Jaws of Life were even needed to release Jimeno and McLoughlin from their fiery tomb. 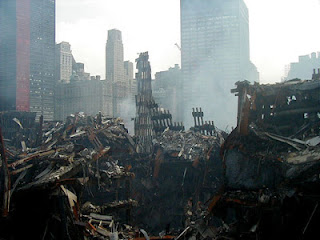 Only 18 people were rescued from the debris of the World Trade Center that day. New York Port Authority officer Will Jimeno and Sergeant John McLoughlin were two of the last three people to be extracted from the wreckage.


The miracles of Jesus were made manifest that fateful day because people heard the voice of God and were released from their fear. They were not deaf to the voice of Jesus.

Today, the Twin Towers are replaced with two shining beacons of light at night. 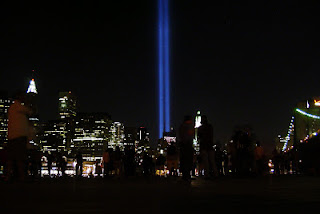 As we see these lights, we think of those 412 first responders who saved lives, then lost their lives in the chaos and catastrophe that day.

The National September 11th Memorial and Museum now features two giant pools of water where the towers used to be with the names of all the victims embossed in the granite surrounding the flowing waters. 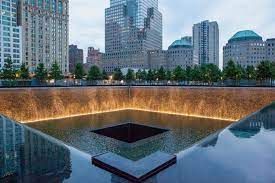 As Isaiah reminds us, “The burning sands will become pools, and the thirsty ground, springs of water.”