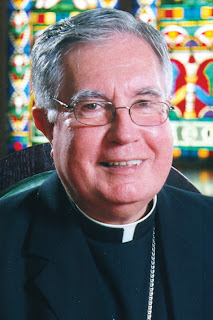 “Bishop Lahey has resigned for personal reasons. We are grateful to him for his dedicated and generous service to the Diocese. Let us all hold him up in prayer,” Archbishop Mancini wrote in a letter to priests and laity.

He assured the priests, religious and laity of his “continued pastoral care and support” and asked for “collaboration” and prayers.

Archbishop Mancini concluded the brief letter by renewing all pastoral and curial appointments.

He will also be meeting with priests of the Diocese during an Oct. 1 luncheon at Our Lady of Fatima Hall, Sydney River.

A letter from Bishop Lahey, ad-dressed to the priests, deacons, religious and parishioners, was posted on the Diocese of Antigonish’s website Sunday afternoon.

“I want to let you know that after much thought and careful consideration, I decided to submit to the Holy Father my resignation as Bishop for personal reasons,” Bishop Lahey wrote.

He acknowledged the “challenges” the Diocese is facing and expressed his confidence “that your faith and compassion will continue to sustain you as they have always done.”

Bishop Lahey also expressed his confidence in Archbishop Mancini and those who serve in leadership roles in parishes.

“To so many of you I would want to say a personal word of farewell and thanks. However, I have already left the Diocese to take some much-needed time for personal renewal. I simply ask for your prayers, as I assure you of my continued prayers for all of you.”

Sunday morning Archbishop Mancini announced he was appointing Father Paul Abbass as local spokesperson for matters relating to the Diocese. Father Abbass is pastor of St. Mary Parish, Frenchvale as well as Episcopal Vicar and Director of Pastoral Services. He will continue on in those duties.

“I, like everyone else, was surprised and taken aback [by the decision],” Father Abbass said Monday morning.

“When I read the letter from the Bishop, and saw that it was after prayerful consideration and it was a personal decision, I accepted that,” the priest said.

He noted there was a general affection for Bishop Lahey among many parishioners so there is concern whether he is OK.

“The only thing I think is regret-table is that some think it is con-nected to the recent legal settlement,” Father Abbass said, referring to the settlement of a class action lawsuit against the Diocese.

The lawsuit concerned acts and allegations of sexual abuse by members of the clergy of the Diocese of Antigonish since Jan. 1, 1950. Bishop Lahey had signed a settlement agreement with lead plantiff Ronald Martin Aug. 7. Nova Scotia Supreme Court Justice David MacAdam approved the $13 million agreement Sept. 10.

“I think the Bishop himself would find it regrettable if people were trying to connect those two and suggest in any way that this puts that agreement at any risk. We are going forward. It is an issue of justice and reconciliation that we are determined to honour. It is categorically in no jeopardy whatsoever.”

In an earlier press release, Father Abbass said the settlement is “a legally binding document.”

“It involves painful spiritual healing, profound understanding from all and difficult financial sacrifices. While the resignation of our former Bishop will be a loss to our Diocese in many ways, his departure does not diminish the legal and spiritual commitments we have made.

"After having spoken with Archbishop Mancini, I want to as-sure everyone, and particularly the victims of sexual abuse, that nothing in the recent court approved class action settlement agreement will change as a consequence of this transition in leadership," Father Abbass said.

“The Bishop's resignation will have no effect on the obligations of the Diocese to compensate survivors in accordance with the terms of the settlement agreement,” McKiggan said.

“I must say that I have a great deal of respect for Bishop Lahey. I believe Bishop Lahey is a decent man who was committed to doing the right thing for survivors of priest sexual abuse in the Antigonish Diocese,” the lawyer said.

McKiggan praised the courage of Bishop Lahey’s apology and his client’s commitment “to seek justice on behalf of his brother David and other survivors of sexual abuse in the Antigonish Diocese.”

“Bishop Lahey acknowledged the responsibility the Diocese of Antigonish had to help those [who] had been sexually abused by priests of the Diocese. [He] has set an example for other Bishops to follow,” McKiggan said.

Victims of sexual abuse have until March 10, 2010, to file applications to take part in the settle-ment. All payments will be made by November 2012. The funds for the settlement will come from the Diocese and its parishes.

Father Abbass also addressed some of the other challenges facing the Diocese.

"This transition in spiritual leadership comes at a time of significant pastoral challenges. Our Diocese is proactively addressing pastoral planning, the amalgamation of par-ishes and a renewal of our approach to evangelization and ministry.

“These are important initiatives that speak directly to our spiritual health as a Diocese. We will be working closely with Archbishop Mancini to ensure these initiatives maintain their momentum," Father Abbass said in the release.

He emphasized ministry is done in parishes. “So all that good work — worship, education and service — continues on in each parish in this period of transition. I would assure people there are leadership mechanisms to carry us forward.”

The priest said the appointment of Archbishop Mancini was “timely.” By appointing an administrator quickly, Father Abbass believes the Vatican “understands our diocese is undertaking some major issues that are important to all of us.”

“We can take some hope from that they recognize our need for leadership,” he said.

Archbishop Mancini will serve as administrator until a new Bishop is appointed by the Holy Father.

“We don’t have any control or influence of that whole process. The Holy Father works with his nuncio here in Canada to look at potential candidates for the episcopate,” Father Abbass said.

Canada is currently without a nuncio as Archbishop Luigi Ventura was appointed as Apostolic Nuncio to France earlier this month.

“No nuncio could complicate things,” Father Abbass said but noted no one knows what work has already been completed in the proc-ess to replace Bishop Lahey.

“I think we understand as we move forward we are a community of faith. The Bishop is certainly the shepherd but we also need to be conscience there is a Good Shepherd and, in faith, we believe the Good Shepherd is with us as we walk through these times,” Father Abbass concluded.

The code states: “a diocesan bishop who has become less able to fulfill his office because of ill health or some other grave cause is ear-nestly requested to present his resignation from office.”

With files from Nicole Myshak of The Atlantic Catholic.