A "Candidate" For The Diaconate 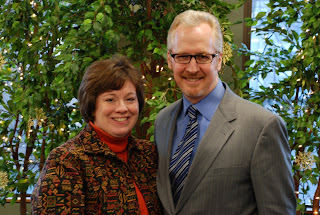 On Sunday, December 6, twenty-four men and I were called by Archbishop Alex J. Brunett to Candidacy for the Diaconate in the Seattle Archdiocese of the Catholic Church. In the Rite of Candidacy, the Church accepts our offering, calls us to a three-year formation program and officially recognizes us as candidates for the diaconate.

We were each called forward by our full baptismal name, answered "Present," walked to the altar, bowed, and took our place in front of the Archbishop. The Rite of Candidacy then was conferred. The experience was awe inspiring and humbling. I was so nervous that when I shook the hand of the spouse of one of my candidate brothers after the Rite I realized my hands were drenched in sweat.

Mary and I were joined by our youngest son Connor (oldest son Sean is a freshman in college and was unable to join us due to finals) and many family and friends. The biggest surprise came as I approached St. James Cathedral. I heard the voice of my mother Suzanne Arango call my name. But how could that be? She lives in Arizona this time of year. But off came her stocking cap and there she was. I was overjoyed by her surprise visit to town. Also there were my brother Dan Kelly and his daughters Katey and Sara, my uncle and aunt Glen and Susan Kelly who drove up from Waldport, Oregon, their son and my cousin Keven Kelly and his four-year-old son Finn. Even my mom's best friend Marie Louise Wahlstrom, who has been close to our family for over 35 years, came.

Also in attendance, was the one-time Bellevue High School teacher who introduced me to the world of radio Bill Poirier and his wife Missy, my favorite WSU broadcasting professor Glenn Johnson who is also the Mayor of Pullman, fellow WSU Murrow College Professional Advisory Board colleague Joyce Szymanski, friends from work Paul Tosch and his wife Stacey, friends from church Randele and David Cross and their five beautiful children, John Olson, Peter and Ruth Wolff, our close friends Gary and Leita Garside, and buddies Peter Shmock and N.Y. Vinnie Richichi. The mother of friend Shannon Drayer delivered a card from her daughter who was at the Winter Meetings for Major League Baseball covering the Mariners, but sent her mom to represent her. Some in attendance are Catholic. Others are not. All are very dear for being a part of this special day. Words cannot express my deep gratitude for their presence.

My candidate brothers and I have been in formation since June 2008. It started with an Inquiry period (during the summer of 2008) and a full year of Aspirancy studies (September 2008 to June 2009). The vetting process is thorough.

Our intellectual formation happens over a weekend once a month and features classes taught by professors from Seattle University, University of Portland and Pacific Lutheran University. We have 300-500 pages of reading each month, numerous papers and other homework.

Our spiritual formation is placed in the hands of our own personal Spiritual Director, Pastoral Supervisor and others. Our pastoral formation happens in our parishes and by serving in ministerial internships. This year I am honored to be placed with the L'Arche Community on Capitol Hill and work weekly with "core members" who deal with mental disabilities and assistants who make up this unique community. It is my sanctuary from the chaos of being a member of the news media in these crazy times and my work managing KOMO Newsradio.

The formation process as a Candidate will last for three more years. With God's good graces, formation will culminate in ordination as a Deacon in the Catholic Church in December of 2012. If you are so inclined, please keep Mary, my family and me in your prayers.