A Decade Of Service In Congress

Intriguing look at a Catholic priest in Congress. So to speak... 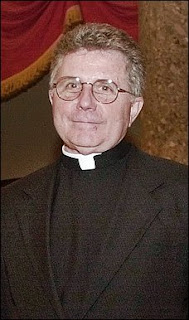 In the beginning, there was partisanship.

When Daniel Coughlin was chosen to be the first-ever Catholic House chaplain in March 2000, Democrats made clear that he wasn't their pick. A top Democratic spokeswoman called the decision to appoint him -- made unilaterally by then-Speaker J. Dennis Hastert (R-Ill.) -- "a graceless, tactless, partisan maneuver."

Ten years later, Coughlin is still in the job, and there is ample evidence that the rancor that accompanied his selection has disappeared: Last week, lawmakers from both parties streamed onto the House floor to honor his decade of service.

"He has seen us through the dark and through the bright," Speaker Nancy Pelosi (D-Calif.) said of the chaplain. Rep. F. James Sensenbrenner Jr. (R-Wis.) confessed to being "a better person for having known Father Coughlin and having been counseled by him." Rep. Daniel Lipinski (D-Ill.) called him "an inspiration."

That Coughlin would receive such praise was not foreordained, given how his service to Congress began.

After the previous chaplain, James Ford, decided to retire, a bipartisan committee of lawmakers was formed to vet possible replacements. The committee forwarded three names to Hastert, who then selected one -- Charles Wright, a Presbyterian minister -- as his choice for chaplain.

But Democrats complained that another of the three candidates, a Catholic priest, had more support on the committee. Some Democrats suggested that Hastert's choice might reflect an anti-Catholic bias among Republicans.

Furious at the allegation, Hastert nonetheless urged Wright to withdraw. And then the speaker decided to hand the job to a Catholic priest who hadn't been on anyone's list of candidates: Coughlin.

Having spent most of his first four decades in the clergy near his native Chicago, Coughlin was blissfully ignorant of the ways of Washington.

"I didn't follow politics at all," Coughlin recalled last week.

When Hastert picked Coughlin on the advice of Cardinal Francis George, the archbishop of Chicago, Coughlin was serving as the vicar for priests, meaning he was a counselor to his fellow ministers during their times of trouble.

That job, it turns out, wasn't so different from his current one.

"My transition from working full time with priests to now being here working with politicians was an easy transition," Coughlin said. "Who likes to talk more than ministers or priests, and politicians? So I have the easiest job in the world -- I just listen."

Indeed, listening is Coughlin's most important task, as lawmakers, aides and other members of the congressional flock regularly visit the chaplain in his comfortable, wood-paneled office in the basement of the Capitol.

Although Coughlin is the first Catholic to hold the post after 58 consecutive Protestants, his door is open to all faiths. (According to the Pew Forum on Religion and Public Life, 55 percent of House members are Protestants, while 30 percent are Catholic and 8 percent are Jewish. The chamber includes nine Mormons and two Muslims.)

Aware of the controversy surrounding his selection, Coughlin says his mantra from the start was "I'm here for everybody."

In addition to spiritual guidance, lawmakers seek out Coughlin to discuss their families, their health and even their career decisions.

C-SPAN viewers probably know Coughlin best for his delivery, spelled by the occasional guest chaplain, of a prayer to open each day's House session. Coughlin often tailors his words to the season and the events of the day, whether they're hopeful or somber.

"As so many dead are laid to rest we must memorialize their ordinary innocence, their daily hopes and responsibilities, as well as their love," Coughlin said on Sept. 13, 2001, the House's first day in session after the terrorist attacks on the World Trade Center and the Pentagon.

Coughlin's prayers are studiously nonpartisan, though observers may occasionally read more into his words than intended. When he delivered a recent ode to the beginning of spring, Coughlin said some Democrats thought he was referring to health-care reform. "They heard it with a slight twist that I was not really addressing," he said.

Being nonpartisan meant not weighing in even when the Catholic Church became a central player in the health-care debate and the divisive subject of abortion funding. Though his personal views are clear -- "I accept wholeheartedly the teachings of the church" -- Coughlin said he was able to counsel members on all sides of the debate, particularly those who were struggling with how to vote on reform.

Coughlin has also been mostly quiet on another controversial topic -- the clergy abuse scandals that have rocked the Catholic church in the United States and around the world.

As vicar for priests in Chicago, Coughlin sometimes counseled members of the clergy who had been accused of sexual impropriety. He did the same during an earlier stint as director of the Cardinal Stritch Retreat House, a facility near Chicago that has served as a rehabilitation facility for troubled priests.

Coughlin has been away from those jobs long enough that he hasn't felt caught up in the internal debates that now consume his fellow priests. "I'm removed from the church in a lot of ways . . . the day-to-day," Coughlin says.

He returns to Chicago several weeks a year to visit his 95-year-old mother (and to watch his beloved Cubs). Asked how long he hopes to stay in the employ of Congress, Coughlin makes clear he is eager to spend even more time back home.

"Not too much longer, because this year I'm celebrating 75 years of age, 50 years as a priest, 10 years here," Coughlin says. "It's time for someone else."
Posted by iServant Media at 1:37 PM