For Catholics, It’s The Best And The Worst Of Times 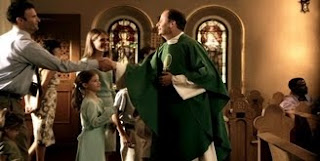 
When I first saw a Catholics Come Home commercial, I was already there — “home” in a pew at Everett’s Immaculate Conception Church, my parish for nearly 30 years.

Members of Catholic parishes in the Archdiocese of Seattle, which covers all of Western Washington, got a Sunday morning preview of the TV ads before they began airing about six weeks ago. The commercials have been seen in our region during sports, news, prime time and daytime shows, on network and cable TV throughout the Lenten season leading up to Easter.

Created by Catholics Come Home Inc., a Georgia-based nonprofit organization, the campaign is meant as an invitation. With ads that cover church history, spiritual reflections and testimonials of people who have returned to Catholicism, the aim is to bring inactive Catholics and others into the faith.

“I think the ads are definitely having an effect,” said the Rev. Hans Olson, pastor of St. Mary Magdalen Church in Everett. Olson said Lent and Easter typically bring people to church, “but not in the numbers we’ve seen.”

Through responses in church and talks he’s had, Olson estimates that 25 to 30 people have come to St. Mary Magdalen recently because of the Catholics Come Home messages. He also thinks the ads have influenced faithful regulars. “Probably more than anything, it’s brought an awareness to Catholic people already here, an energy towards their faith,” Olson said.

While Olson said this is “a perfect time for people” to be seeing the ads, this is also a wrenching time for the Roman Catholic Church. The church in Europe, particularly in Ireland and Germany, has been rocked anew by claims of sexual abuse of children by priests, some dating back decades.

The New York Times has also reported extensively on a Wisconsin abuse case involving a priest who worked at a school for the deaf from the 1950s to the 1970s.

At the Vatican Wednesday, the spokesman for Pope Benedict XVI, the Rev. Federico Lombardi, told the Associated Press that the pope sees the abuse scandal “as a test for him and the church.”

As a Catholic who never left the home that is my church, I pray that the highest church leadership will come completely clean, admitting wrong where wrong was done.

Honesty and real contrition could go a long way toward bringing many Catholics home.

“There are people who betray our trust, and they need to be rooted out. We need to show love to the people they’ve hurt,” said Peterson, 48, a Catholic who lives in Roswell, Ga., near Atlanta. “It’s awful, and we pray for repentance and conversion of people not living a truly authentic Catholic life.” At the same time, Peterson said, “there have been millions of very faithful, heroic priests in the world giving their very hearts and souls to serve the poor and help people.”

Peterson started Catholics Come Home after attending a retreat about 13 years ago. At the time, he said he was “a lukewarm Catholic” who attended Mass but wasn’t fully living his faith.

Originally from Phoenix, Peterson said the first Catholics Come Home campaign was aired in the Diocese of Phoenix in 2008. Churches there reported increases of about 12 percent in attendance in the months after the ads ran. Peterson said most people responding to the ads have said their reasons for drifting away were secular — they got out of the habit of attending Mass — and not due to complaints about the church.

In addition to the Seattle Archdiocese, ads are currently running in Green Bay, Wis., with more campaigns planned in several large cities.

John Shuster is a former priest, a self-described “married priest.” He heads the Northwest chapter of the Survivors Network of Those Abused by Priests, a national group known as SNAP. Shuster, 58, of Port Orchard, said he is not an abuse victim, but has been in contact with many who are. Ordained in 1973 in the Society of the Divine Word, a Catholic missionary order, he served parishes in east Los Angeles and in Mexico before leaving the Catholic priesthood in 1983. He and his wife, Sally, work together in helping abuse victims.

He, too, prays for openness in the church. “Part of being a good priest is to stand up for what is right,” Shuster said. “Act as Jesus would. Jesus stood up.”

By the way, Shuster likes the Catholics Come Home commercials.

“I think they’re good,” he said. “Spirituality is important. We have a soul, just like a body, that needs to be fed.”