There’s a question for the ages. This is something everyone who works in church media wrestles with — and the question isn’t an easy one to answer, especially when the organization you’re covering, the Church, is also the one signing your checks.

But John Burger, late of the National Catholic Register, got one answer following the Benedict Groeschel debacle. The good folks at Get Religion have more, but here’s the headline: Rod Dreher is reporting that Burger was sacked over the interview:

Several readers have e-mailed to say that John Burger, the veteran National Catholic Register writer and editor who conducted that controversial interview with Fr. Benedict Groeschel (it’s been removed from the site; story about the controversy here) was fired by the EWTN-owned newspaper because of it. I confirmed with Mr. Burger that he was let g 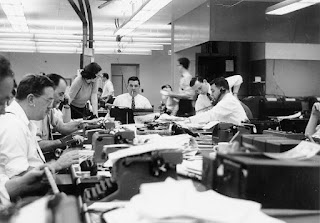 o because of the incident, but he did not wish to comment further.

This is disgraceful on the Register‘s part, just disgraceful. I hope somebody in Catholic media with a job to offer will contact John Burger and talk to him.

EWTN and the newspaper it publishes has made John Burger, now jobless, suffer for committing the sin of journalism. At the Register, the truth won’t set you free; it’ll cost you your job. See, this is part of the reason why so many talented men and women of faith stay away from church-affiliated news and entertainment media. People who run churches and church organizations often don’t understand what communications (journalism, filmmaking, etc.) is. They think it’s all supposed to be publicity, and so they guarantee mediocrity, and ultimately the discouragement of talented people — artists and journalists — who have good and useful talents to give to the whole church.

Frankly, I don’t think Burger was the one at fault. He did his job, and delivered what the Register wanted. Could the interview have been better? Probably. It would have been good for Burger to sense that something was wrong with Groeschel’s comments and ask him, “Just to be clear…are you saying…??” or give the priest a chance to get out of the corner into which he’d painted himself. But Groeschel’s remarks went by unchallenged, and the rest is history.

No, the real problem was with the editorial process. Did no one in the editorial hierarchy read the interview and say, “Wait a minute. He said WHAT?” Did no one pick up the phone and call the publisher (which happens to be Groeschel’s boss, EWTN) and say, “We have a problem.” Did no one think for a moment that having a popular and widely revered figure like Fr. Groeschel say those things might stir up trouble? Did no one consider that they should get some clarification on those comments — or, to protect the old man’s reputation, just remove them? (The interview, an admiring anniversary piece anyway, wouldn’t have suffered without them.) Finally, did no one understand what so many people have been saying for years (and what he admitted in his statement): that Groeschel’s health is frail and his wits aren’t as sharp? Who thought interviewing him was a good idea in the first place? And why didn’t the Friars of the Renewal intervene to protect Groeschel from himself?

Those who toil in Catholic media are constantly walking a tightrope, between being fair and balanced journalists and being unabashed apologists. I once worked for a Catholic media enterprise where the rules were clear: “You can tell both sides of the story,” my boss said, “but you have to let the Church have the last word.” That worked better in theory than in practice. There were also a lot of issues that never got coverage — the debate over women’s ordination leaps to mind—because they were radioactive and deemed too controversial.

In the Groeschel case, someone clearly had to take the fall for this monumental blunder. Unfortunately—and unjustly— it was John Burger.

But the reality is: there’s plenty of blame to go around.

Posted by iServant Media at 4:06 AM