Homily – 5th Sunday in Ordinary Time – Call of the Deacon

In the first reading, we hear Isaiah’s call story, when the Lord asks, “Whom shall I send?”  The self-avowed sinful Isaiah responds, “Here I am… send me.”
In our second reading, we hear St. Paul briefly share his call by Jesus to serve (not persecute) God’s people. 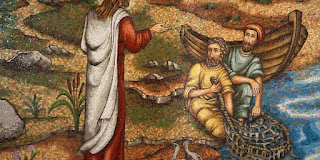 In today’s Gospel reading, we witness fisherman Simon Peter’s amazing call story. We hear Simon Peter say to Jesus after the miracle with the fish, “Depart from me, Lord, for I am a sinful man.”  Jesus says to Peter, “Do not be afraid; from now on you’ll be catching men.”
Jesus knows Peter doesn’t feel worthy to come follow him because of his past. But Jesus wants all of us to focus on the future with him, not on the many voices of fear that come from our past.
How many of us feel this way when we hear God’s call to serve His Church and His people?
Yet, God still turns to self-avowed sinful people to help build His Church -- even handing Peter (and his successors) the keys to the Church.
This is one of the great mysteries of our faith, and shows how God can turn our weaknesses into strengths through the power of humble service, and how being open to God’s call can transform our lives, and conform us better to Christ. 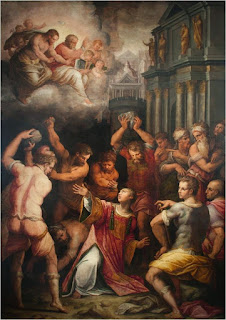 One of the most inspirational characters in all of Christianity is St. Stephen, one of the first seven deacons and the very first Christian martyr.
As some may recall, St. Stephen went to his death, asking the Lord to forgive his executioners. He was sent to his death for proclaiming the power of the Risen Christ to his angry countrymen, dying with an angelic smile on his face as he gazed on a vision of Jesus in heaven.
The word “martyr” actually translates to “witness.”
St. Stephen’s powerful witness still has an impact on people today. Most deacons claim him as one of their patron saints.
Benedictine College theology professor Andrew Swafford says, “When a teacher teaches with conviction as Stephen did, it makes an impact. It may lead to persecution, but other eyes are watching.” 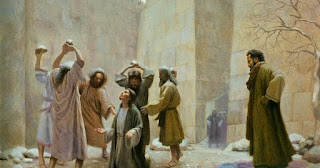 St. Stephen’s witness changed the life of one eye-witness to his death in a dramatic way.  A young Saul of Tarsus held the coats of the men who stoned St. Stephen to death.
Saul was one of the most ferocious persecutors of the Christian faith, putting scores of men, women and children to death for believing in Jesus.
Saul became St. Paul, and his conversion and dramatic call story changed the Christian world forever. St. Paul would become one of the greatest witnesses and evangelists of our Christian faith. His experience with a deacon changed his life.
Recently, the Catholic Church celebrated the 50th anniversary of the restoration of the permanent diaconate. 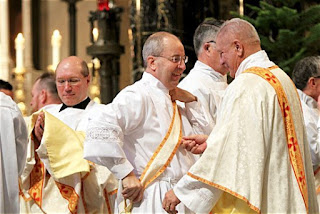 Popular Church commentator Rocco Palmo calls the restored diaconate one of the greatest success stories of Vatican II.
Deacons are the only religious vocation that is actually growing today. Nearly 50-thousand permanent deacons serve the world Church in 2019. 18-thousand deacons are now serving in U.S. alone. 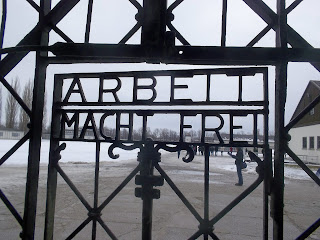 The permanent diaconate started as a conversation in Cell Block 26 at Nazi death camp Dachau. This was the place set aside for clergy. During the Nazi reign of terror, over 24-hundred priests were kept there. Most were put to death.
Many priests in the prison camps lamented the lack of Catholic clergy with both a foot in the Church and a foot in public life. These priests felt the presence of permanent deacons could have helped prevent what happened in Nazi Germany. 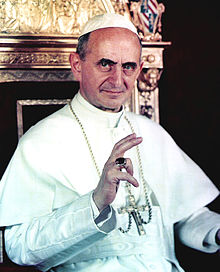 A number of these priests survived the death camps and years later led the effort to restore the permanent diaconate during Vatican II.
Many people ask, what is a deacon?
Deacons are ordained clergy. Most are married.
And, no, deacons are not mini-priests or grownup altar servers! Quite the opposite.
Deacon is not a title as much as it is a representation of what they are called to do. The word deacon actually comes from the Greek word “diakonia,” meaning service or servant.
Deacons can baptize, perform weddings, lead funerals, preach and teach. The deacon’s role is to help make the priest’s job easier. 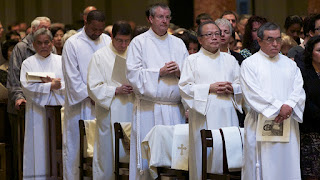 But equally as important, deacons are asked to be the eyes and ears of the Bishop.
The official title of a deacon in the Catholic Church is Reverend Mister (in the Orthodox Church deacons are called Father Deacon). But you can just call me Dennis. No title needed.
I always tell young people who think being a deacon is a big deal this analogy. If the Church were a circus, the Bishop would be the Ring Master. The priest would be the lion tamer. And the deacon would be the guy following around the elephant cleaning up the mess.
Deacons are unpaid servants of the Church.
That’s right. Deacons don’t get paid for their service. 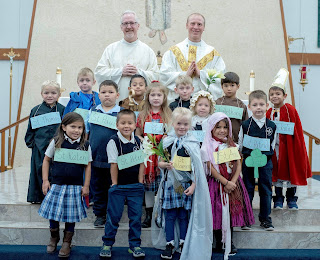 A small number of deacons are paid to lead parishes without a pastor, or serve as pastoral assistants at parishes, or work for the Archdiocese, but the vast majority of deacons do what they do with no financial gain.
You’ve heard of building up treasure in heaven?
Deacons do what they do because they love the Church and they love the people of God, and because they’re answering God’s call to greater service, especially to those on the margins of society.
The deacon has a three-fold ministry: Word, Liturgy and Service. 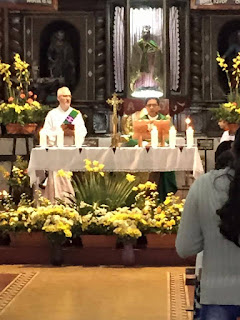 Most deacons today give homilies, assist the priest and bishop at Mass, and serve in prison, hospital and hospice ministry, work with those experiencing homelessness, assist migrants and refugees, feed the hungry, and serve the poor and oppressed in our society today (the same people we heard Jesus talk about a few weeks ago when he read from the scroll of Isaiah in his hometown synagogue).  This is the call of the deacon.
Deacons are ordained to the Sacrament of Holy Orders.
One theologian calls the deacon the living sacrament of service in the Church today.
In our own parish community, we have two men in deacon formation, answering God’s call to deeper service.
With God’s providence, and the Bishop’s official call forward, these two men will be ordained in December of 2020. 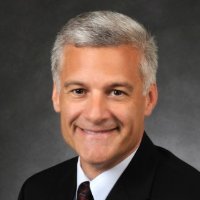 Duane Schireman heard the call to deeper service years ago as a boy, but really felt the call start to resonate while accompanying his son and a delegation of young people from the parish to World Youth Day in Madrid, Spain in August 2011.  Witnessing a sea of a million young people deepening their faith sparked his resolve to say “yes” to God. The trip also included stops in Rome and Assisi.
There are many who encouraged him along the way from family and friends, priest and deacon friends, to one inmate at Monroe State Reformatory. God speaks best through the people around us.
A few years ago, Duane retired from a long career as an HR executive with Boeing, doing so shortly after beginning deacon formation. He even felt God’s hand in that decision and how things worked out in leaving Boeing early. Duane credits the Virgin Mary for clearing the way for him to become a deacon. 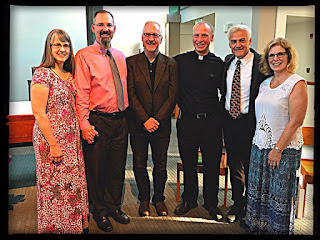 Chris Shambro’s call story also began as a young boy. For him it came while cleaning the Church with grandmother.
He was also encouraged by his best friend J.D. The two would regularly go to O-L-P-H to pray for God to give them a vocation, praying especially to Our Lady of Perpetual Help.
Chris contemplated the priesthood with his buddy J.D. That was until he met the woman of his dreams, now his wife, Ann.
His friend J.D. did go on to become a priest. You know him as Fr. Jack Shrum, one of Chris’ dearest friends and confidants.
Chris first thought about the diaconate in 2007, but he and Ann decided the kids were too young. He again felt called when a class was forming in 2014-2015 and said, “yes” to God.
Chris serves as IT manager for the Snohomish County Court system. He also serves as a Scout leader, and is active in numerous ministries at O-L-P-H.
Perhaps the greatest witness in our parish community today is Deacon Matt Zuanich and his 40-years of service as a deacon, most of them right here in our parish community.
He’s one of three surviving members of a class of 25 ordained in 1978. We call him the Arch-Deacon of IC and OLPH. 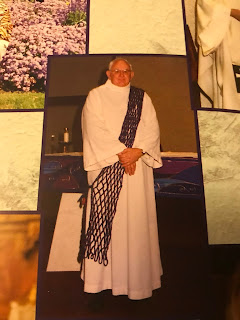 Today, Matt’s main ministry is taking care of his wife Kay.
Matt decided a few years back (at age 85!) to go to Senior Status as a deacon, meaning he’s not required to do all the things ordained deacons are asked to do (like continuing education, attending deacon retreats and gatherings, or actively serving as deacon) -- although you’ll still see Matt serving at the altar from time-to-time.
Matt credits his close friend Fr. Raymond Heffernan with encouraging him to say “yes” to God’s call to the diaconate.
Matt loves today’s Gospel story about Jesus’ request to Simon Peter to drop his nets and become a “fisher of men.” He even had that story printed on his ordination prayer cards and deacon business cards.
Matt has crocheted hundreds of these stoles for deacon and priest friends using skills learned as a commercial fisherman in his youth.
These are just a few examples of how we are all called by God to serve His Church and His people. 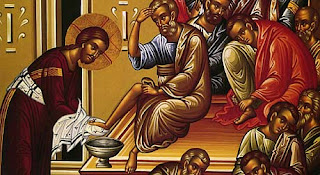 Jesus wants us to all to be focused on our future with him. Not keep looking over our shoulders at our pasts and come up with excuses to not follow Him deeper into His ministry.
So, my sisters and brothers, I ask you: how is God calling you to deeper service?

Posted by iServant Media at 2:58 PM