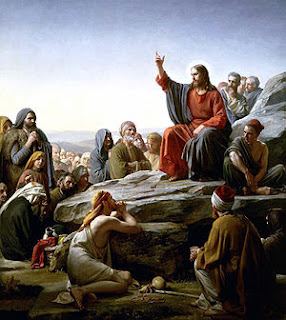 When Jesus lays down the law, do we hear it, do we share it, do we live it?


This is what all the saints did and still do today.


They understand the wisdom of Jesus, his law of love, and put it into action in their lives.


Blessed Mother Teresa once said, “Some people come in our life as blessings.  Some come as lessons.”


Nobody knows this better or shows this better than a modern day saint who has taken a seemingly hopeless culture of lawbreakers in his hometown of Los Angeles and lovingly shaped them into law lovers, law livers and law givers.


I’m talking about Gregory Boyle.  Ever heard of him?  Perhaps not.   He’s not famous.  His efforts are only known by people who have read his works or heard him speak.

I’m currently reading his book “Tattoos on the Heart:  The Power of Boundless Compassion.”


It’s a story about his experiences in ministry on the tough streets of the City of Angels.  Boyle Heights is the gang capital of the world.  I think it is no coincidence Fr. Boyle has run the nation’s largest gang-intervention program there for 21-years.


He encounters about 12-thousand people a year at Homeboy Industries. Eight-thousand are current gang members, “hailing from 700 different gangs in L.A. County.” 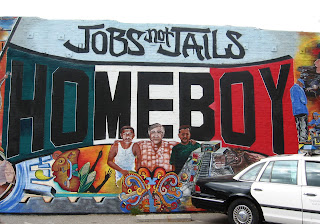 “It’s a rehab center where gang members seek to redirect their lives.”  It’s an oasis in the desert.  It’s the Kingdom embodied here on earth.


His ministry has been described as impacting “the human life-cycle of fall / grace / redemption / repeat -- again and again.”


His greatest gift is sharing God’s unconditional love with what many call the most unlovable people on the planet:  street gang members.


Every day he meets with and ministers to new, young men and women, slowly rescuing them from the clutches of deadly gang life with the promise of a job and a community. 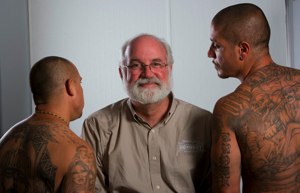 Fr. Greg calls this a “particularly disparaged sub-grouping of the poor whom (he has) been privileged to walk.”


Homeboy Industries has built into its logo a slogan:  “Jobs Not Jail” and uses it as its motto, its clarion call, its promise.


He’s in the business of justice and mercy.  And he’s peddling hope on the hopeless streets of L.A.


These are the "poor in spirit" Matthew’s Gospel speaks of today.

Father Boyle is meek, merciful, comforts those who mourn (he’s buried nearly 150 gang members), is clean of heart, hungers and thirsts for righteousness, but most of all, Father Boyle is a peacemaker.  He is truly Blessed.


Father Boyle describes his life on the streets as snapshots of personal stories where “you discover the shape of God’s heart and you discover a common sense of humanity.”


He strives to “create a sense of community of kinship so that God might recognize it.”


Father Boyle thinks our culture spends too much time demonizing the gang world instead of helping gang members to realize “we belong to each other” and help them to climb out of the pits of hell on earth.  He says there’s no such thing as “us and them, only us.”


This is what the Beatitudes call us all to do, each in our own unique way.  Be a saint peddling Jesus’ law is love.


Social scientists say young people join gangs “because they feel hopeless, because they are running from something, because they want a family, because they want someone to belong to and something to be a part of.”
Poverty and family dysfunction are the catalysts for gang life.  As Fr. Greg puts it so bluntly, kids in his community “plan for their funerals and not their futures.”  It is a heartbreakingly sad life.


Yet, Father Boyle takes a hopeless life and turns it into a hope-filled life, with amazing results. 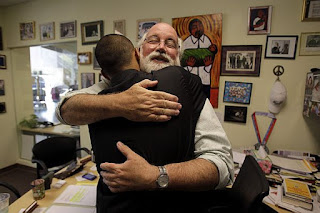 What does Homeboy Industries do?  For starters, it’s perhaps best known for its tattoo-removal service for gang members.  But Homeboy Industries also make and sell logoed clothing, run a bakery and catering business, offer creative writing classes to teach tough-talking gang members to look deep inside their lives and become poets to the community, they run a job referral service, drug and alcohol counseling – the list goes on at Homeboy Industries.


Father Greg told recent UCLA graduates:  they should “be concerned less with the bottom-line and more (concerned) with those who line the bottom.  Inch yourself out to the very edges and the margins … dismantle barriers that exclude and … widen the circle of compassion so that the poor and the powerless and voiceless might find themselves included.  And so you stand with those whose dignity has been denied and you stand with those whose burdens are more than they can bear and you stand on great and fortunate days with the easily despised and the readily left out.  You stand even with the demonized so the demonizing will stop and with the disposable so the day will come when we stop throwing people away.”


I’ve posted this entire commencement speech, along with an interview with Father Greg Boyle from the Dr. Phil show and other videos on my website:  deacondennis.com.


I encourage you to see what a modern day saint looks like.


I’m sure there are current gang members out there who insult Fr. Greg and persecute him and utter every kind of evil against him.  But rejoice and be glad, because great is his reward.


He’s saving men and women from an early, violent death on the mean streets of L.A.  He’s helping them to put God in the center of their lives.  He’s saving souls one kid at a time.


It has been written, “The Beatitudes ask everything of us.  But they also comfort those who sorrow and infuse the weary with hope.  They inspire the downtrodden and offer visions of a world where our hunger for justice is satisfied and mercy reigns.” 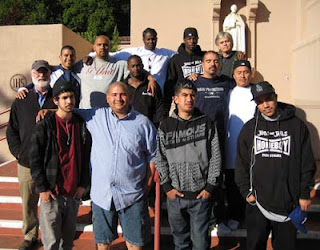 Father Gregory Boyle and his Homeboy Industries ministry are a living embodiment of the Beatitudes right here on earth in our present time.  He is truly Blessed.


And Father Greg is both a blessing in our world today and a lesson in our lives.  He opens our eyes to a wider reality where Jesus reigns and we live in peace and harmony with each other.  No matter our race, no matter our social status, no matter any false distinction society might use to separate us.


Indeed rejoice and be glad.


Go to Homeboy Industries website
Posted by iServant Media at 10:19 AM