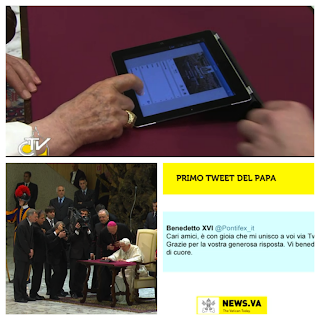 Pope Benedict tweeted for the first time today and revealed something new during the ceremony.

Our Lady of Guadalupe who we celebrate today and every December 12th is the new "Patroness of the New Evangelization."

She's been known for years as the "Patroness of the Americas," but this is a new title of distinction given as we celebrate the "Year of Faith" 2012-2013.

The "Year of Faith" is a Pontifical Council designed to promote the New Evangelization.

Pope Benedict XVI already has over a million followers on Twitter even though he only launched his new account (@Pontifex) about a week ago.


A little background on the feast day of Our Lady of Guadalupe.

This comes from catholicexchange.com: 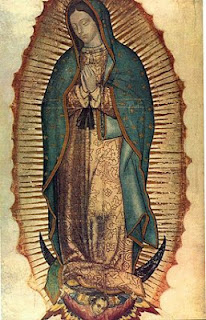 "Today the Church celebrates the feast day of Our Lady of Guadalupe.

On December 9, 1531, Juan Diego, a 57-year-old Aztec, was taking his daily route to Mass. Walking by Tepeyac Hill, he heard beautiful music, like choirs of angels singing. He stopped to listen.

The music stopped, but he then heard the sweetest voice he’d ever heard beckoning him, 'Juan, Juan Diego, Juanito!'

There before him stood a most beautiful young woman, a Mexican girl who looked like an Aztec princess. She was dressed in an embroidered scarlet gown. Over her head and shoulders hung a deep jade-colored mantle covered with golden stars and she was standing on a maroon crescent, held above the ground by an angel.

'Dear little son, I love you,' she said. 'I want you to know who I am. I am the ever-Virgin Mary, Mother of the true God who gives life.'

She then requested that Juan go to the bishop and request that a chapel be built on the hill for the Mexican natives for whom she expressed a special love. Juan rushed to do as she asked, and was able to get in to see the bishop. He was, however, dismissed without an answer. 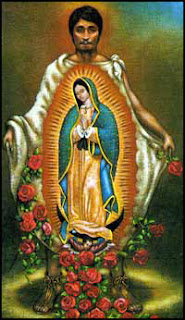 On his second attempt the bishop asked him to bring proof that he had indeed seen the Mother of God. Juan left excited, feeling sure that the Blessed Mother would give him this proof.

The next morning, though, before Juan could go and meet with the Virgin, he found his only surviving relative, an uncle, seriously ill.

Juan felt his first duty was to bring a priest to his dying uncle and so he decided to take another route so as not to see the Virgin and thus be delayed. But the Blessed Mother intercepted him on the path and assured him that his uncle would recover.

She then instructed him to gather flowers that were growing on the hilltop in his tilma (shirt) and carry them to the bishop. The Madonna arranged the roses, tied the corners and asked him not to open his shirt until he reached the bishop. 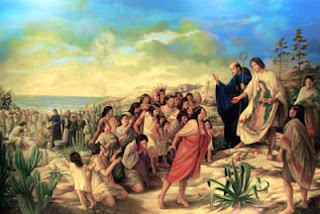 When Juan stood before the bishop and untied his shirt, releasing the flowers, the bishop didn’t seem to notice them. Instead, staring at Juan’s shirt, he fell to his knees with tears streaming down his face.

Perplexed, Juan looked down at his shirt and saw that the Virgin had given him a sign even more miraculous than roses growing on the side of a mountain in winter.

She had left an image of herself on his tilma, looking exactly as he had seen her. And when Juan returned home, he found that his uncle’s health had been completely restored. The Madonna had appeared to his uncle, as well. 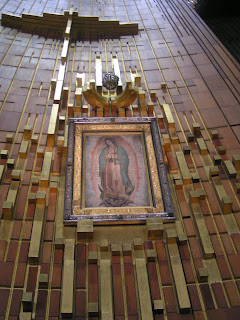 The chapel that the Virgin requested was quickly built. The image she left has been given the name of Our Lady of Guadalupe.

In the following seven years after this apparition, eight million formerly pagan Aztecs were baptized and became Christians.

Today an average of 1,500 pilgrims kneel daily before the miraculous tilma — which has sustained its perfect image for almost five hundred years — at the new Basilica of Our Lady of Guadalupe in Mexico City."

Happy and Blessed Feast of Our Lady of Guadalupe!
Posted by iServant Media at 10:09 AM