Here's a great article on our recent pilgrimage to the sites of the Central American martyrs.  It really captures the essence of the trip.  Fr. Bob is from Indiana.  The article is from his Diocese newspaper.  Enjoy the read...
----
Reprinted from:
The Catholic Moment
Newspaper of the Diocese of Lafayette-in-Indiana
By Caroline B. Mooney
---- 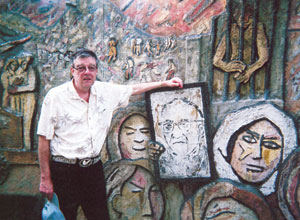 More than 75,000 people were killed during the conflict.   In El Salvador, the military killed more than 10,000 people and in Guatemala, government-backed paramilitary groups killed 50,000; left 100,000 unaccounted for and committed 626 village massacres.

Each January since 1999, the Maryknoll Office of Vocations has invited bishops, priests, brothers and deacons on a pilgrimage/retreat to Central America.

Maryknoll priests and brothers have served the poor in Central America since the 1940s, and each trip offers presentations by Maryknollers who lived through the conflict. 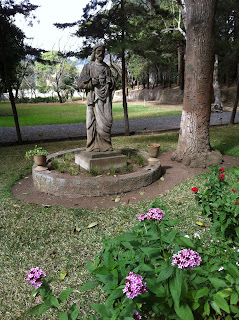 Father Williams said he had been interested in going on the pilgrimage for years. “I do parish ministry with Hispanics daily, but they are not familiar with the Central American experience,” he said.

“They are Mexicans and when I mention the name Romero, they don’t know anything about him. I thought the trip would be very enriching for me. I was in Guatemala some years back, but I didn’t go into the areas the retreat focused on.

“I also like to be around others with the same interests as me. The retreat format sounded interesting and inviting — I’m never too old for new experiences,” the 70-year-old pastor said.

“It really attracted me because it was a long list of martyrs that we followed every day.” The retreat team included companions, colleagues, fellow ministers and friends of those who had died. 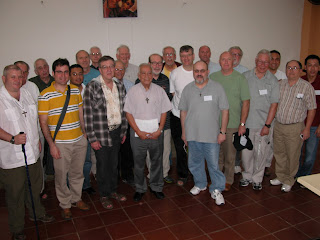 At each site, Maryknoll missioners told personal stories, and there were translators on hand. Four Maryknollers accompanied Father Williams’ group of 18 priests and deacons. “We really hit the ground running,” he said.

“After arriving in Guatemala in mid-afternoon, we met at 5 p.m. for evening prayer and Mass with the pilgrimage group.” Each day began with prayer at 6:30 a.m. and ended with night prayer at 9 p.m. or 10 p.m.

The group stayed in a Maryknoll House in downtown Guatemala City, with three nights in a retreat house in San Salvador. They travelled by bus and celebrated Mass daily, sometimes at the shrines of the martyrs.

“I had a pretty good sense of safety, but the group that had been before us was robbed,” Father Williams said. “We used a different kind of bus and I didn’t travel with my wallet. But I had to take my passport along because we went from one country to another. We did travel in dangerous territory. “

As we left the city and traveled into Santiago, there was a big shift,” he said. “The indigenous people live in a different world than we are used to. There is a different temperament in society.”

Father Williams said the trip’s focal point was a visit to the hospital chapel where Archbishop Romero was shot during Mass. 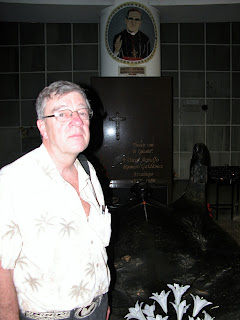 “We celebrated Mass there at the same altar and toured his humble little home and tomb underneath the cathedral in San Salvador,” he said.

“It was quite an experience. “I remember writing a letter to (Archbishop) Romero,” Father Williams said. “I was president of the diocesan senate at that time and I sent a letter of support from our priests. He was on my radar, but I don’t know that most people in the United States paid attention to him until after his assassination.”

Several evenings were spent watching movies educating the group about the next day’s destination. “One of these was about four church women who were raped and murdered,” Father Williams said.

“They were coming home from the airport and were hijacked. The film showed footage of them being pulled with ropes out of graves before they were re-buried. It was pretty graphic stuff.” Father Williams said he was particularly moved by a visit to Santiago Atitlan in rural Guatemala.

“We slept on the floor there in a rectory where Father Stanley Rother, a priest from the Archdiocese of Oklahoma City, had been pastor. He was shot and killed (in 1981 by the military) while sitting in a library in his living quarters. The room has since been made into a chapel.” 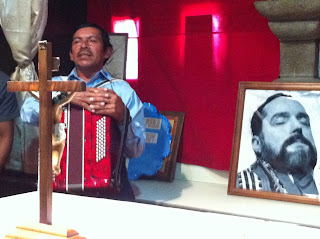 Father Rother was one of 10 priests murdered in Guatemala that year. “I sat very close to a bullet hole in the floor during a beautiful morning prayer service which included songs about Father Rother by a local group,” Father Williams said. “An older member of the group who knew him had written one of the songs.

“As a non-Hispanic working with Hispanics, I felt a real kinship with Father Rother,” he said. “He was an American working with an indigenous community (Mayan Indians). He was there all by his lonely self, teaching them how to farm, read and write, keep healthy, and the compassionate love of Christ in the midst of their pain and suffering.” 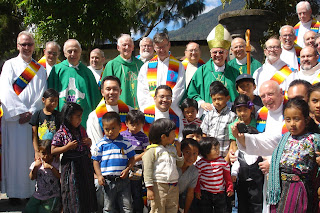 The group celebrated Sunday Eucharist with the local bishop at the site where Father Rother was buried. “It was very, very moving,” Father Williams said.

“The church, about the size of our cathedral, was packed and all these little Indian kids wanted to shake hands with or touch the priests.

Many of the local community were Spanish-speaking indigenous people. Their clothing is outstanding, colorful and beautiful. During the war, they were murdered by the hundreds.

“Leaving the city and entering Santiago Atitlan was a big shift because that was where the indigenous people lived,” Father Williams said. “They were very, very friendly. Where we were in the rectory, there was a balcony that overlooked the plaza in front of the church. When we were on that porch, it was like being in a fishbowl.” 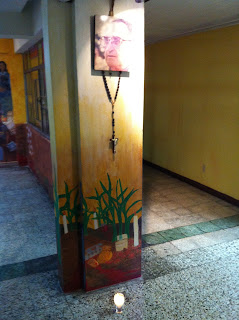 Another stop was the site where Bishop Juan José Gerardi of Guatemala City was beaten to death in his garage. He had just completed a study of the massacres, which filled four volumes. He gave a presentation of his findings on a Friday night in the cathedral. Sunday night he was killed.

The group also visited The Monument to Memory and Truth in El Salvador. It is a 300-foot-long monument that is engraved with nearly 30,000 names, a roll of those who were killed or disappeared. Not all the names of the war’s victims were available when the monument project began, so the list is growing.

Father Williams said that the members of his travel group grew to know each other quickly and they plan to stay in touch.

“We are planning a conference call — we don’t want this experience to go away,” he said. “I would highly recommend this trip, especially for people who are working with Hispanics. The Maryknoll experience makes it all worth it because they were there.”

The next pilgrimage retreat is scheduled for Jan. 13-24, 2014. For more information, see the Web site http://www.maryknollpilgrimage.org.
Posted by iServant Media at 6:57 AM