Another Postcard from Antigua, Guatemala

I know there's hope for the future in our Catholic Church.
While studying Spanish here in Antigua, Guatemala, I met four seminarians from Louisiana studying at my school. All four are the ages of our two boys (in their early 20s).
These young men invited me to join them in ministry at a nursing home in Antigua.  Interestingly, the Spanish name for nursing home translates to "Asylum of the Ancients."  And it quite literally is here.
As we walk the halls and talk with residents I sense so much aloneness.  Few have family who regularly visit.  Most are just spending their days waiting for loved ones to come and see them, who never or rarely do.
I met one man from Los Angeles who was sent back home to Guatemala by his family, who then took possession of his home in California.  He feels trapped in the "asylum for the ancients" and longs get out.  But due to his need of a walker and Antigua's famous cobblestone streets this is now just a pipe dream.
Many residents get so much joy from their visits with the seminarians.  Catholics are happy to receive rosaries the young men bring to brighten the days of the faithful.
As we were returning from a visit one Sunday, one of the seminarians saw an older man on the street with a broad smile and familiar face.  One week earlier the man had told the young man he had too much to drink the night before and was hungry.  Struck by the man's candor, the future priest took the man to a nearby fast food restaurant and bought him a meal.
On this day, the man wanted to say "gracias" to the young man who immediately asked if his older friend had eaten recently.  Sheepishly, he said, "no," so, the young seminarian took him into a restaurant to buy him lunch again.
Pope Francis calls us all to be attentive to the needs of the poor.  I witnessed first hand this in action.
As I said, the Church's future is in good hands. 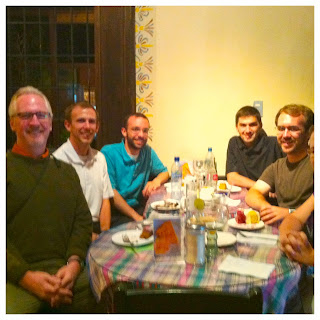 Posted by iServant Media at 8:41 AM