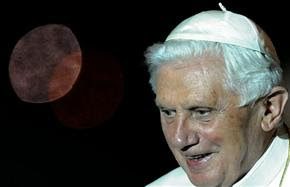 The pontiff succeeded in presenting himself as a lovable, elderly figure — a far cry from the "Rottweiler" image, they said.

"What the visit accomplished above all was to unify Catholics and humanise a pope who has so often been perceived as cold, aloof and authoritarian," wrote Catherine Pepinster, editor of The Tablet newspaper, a British Catholic weekly.

"The fabled Vatican ’Rottweiler’ turned out to be a shy, warm and frail 83-year-old who perked up every time his security detail allowed him to greet people, especially youngsters and his own generation."

Before the first ever state papal visit to Britain, Benedict had been viewed as a "remote Teutonic hardliner," said the Times daily.

But he appeared in a different light entirely on the trip and remarks aimed at easing tensions between Anglicans and Catholics, such as on shared traditions and culture, played a great part in this transformation, it said.

"Ratzinger the rottweiler transformed into Benny the bunny," enthused the paper, using the name of Benedict before he became pope, Cardinal Joseph Ratzinger.

"We all want to cuddle up to him and get him to bless our babies."

His four-day tour of mainly Anglican Britain, which took in Edinburgh, Glasgow, London and Birmingham, defied fears that it would be overshadowed by enormous protests or gaffes and the press in general regarded it as a success.

"This was a much more successful visit than the Roman Catholic hierarchy had dared to hope," said the Daily Mail newspaper.

"The crowds were larger than had been forecast, if not as big as they were when the charismatic Pope John Paul II came to this country 28 years ago."

The Sun added: "The pontiff’s visit proved much more substantial than anticipated."

Despite the widespread praise for the trip — and astonishment that the pope had pulled off a visit here so smoothly — some looked at the Catholic Church’s long-term relationship with Britain and saw problems ahead.

Pepinster fretted that the institution was not making conciliatory moves towards Catholics on the liberal wing of the Church.

"Gay Catholics and women will still be asking: ’How does the Vatican and Pope Benedict see us and our role, not in society, but in the Church?’," she wrote.

The Guardian daily said that Benedict had not managed to bring believers and atheists any closer together in a country that was increasingly secular.

"The rapprochement required today is not so much between Protestant and Catholic as between the religious and the rest, and Benedict leaves without denting that divide," it said.

For most in Britain, the visit merely amounted to "an anachronistic curiosity."

The Independent was more positive, suggesting that the visit may have at least brought Catholicism to the attention of a country that is for the large part uninterested in religion.

"He may have left Britain just a little more broad-minded than he found it," said the paper.
Posted by iServant Media at 12:57 PM